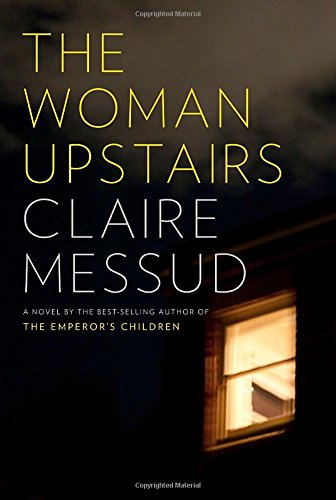 “You will know Nora Eldridge within the first five pages, which are among the most memorable you will read all year.”

Nora Eldridge, the protagonist of Claire Messud’s incisive novel The Woman Upstairs, introduces herself by asking a question—“How angry am I? You don’t want to know.”—before delivering an answer in a seething, torrential monologue.

Nora has always been the “good girl,” the one everybody could rely on, the one who deferred her own dreams and sublimated her artistic ambitions in order to follow the career track, the unmarried girl who played the dutiful daughter as her mother slowly and painfully died, the one who speaks with her aging father every day, and the one who has nobly become a popular teacher of third graders.

And she is furious.

“I’m angry because I’ve tried so hard to get out of the hall of mirrors,” she explains, “this sham and pretend of the world, or of my world, on the East Coast of the United States of America in the twenty-first century. And behind every mirror is another fucking mirror, and down every corridor is another corridor, and the Fun House isn’t fun anymore and it isn’t even funny, but there doesn’t seem to be a door marked EXIT.”

She describes herself not as an Underground Woman brooding about accrued resentments, nor as a madwoman lurching around in the attic, but as the quiet woman on the third floor, toiling away in solitude without ever disrupting the order of the universe:

“[Women upstairs] are completely invisible. I thought it wasn’t true, or not true of me, but I’ve learned I am no different at all. The question now is how to work it, how to use that invisibility, to make it burn.”

This opening burst of controlled fury is a bravura piece of characterization, defying any attempt by the reader not to commit to the rest of the novel. You will know Nora Eldridge within the first five pages, which are among the most memorable you will read all year. Or at least the Nora Eldridge she wants you to see.

Though it becomes easier to exhale after the first chapter, The Woman Upstairs remains to the end an unsettling, shape-shifting story that addresses the often intersecting issues of womanhood and self-perception: the woman the world expects Nora to be and the woman Nora portrays herself as.

The narrative focuses on an uneasy love triangle of Nora’s creation involving the Shahids, a family that has just moved from Paris to Cambridge, Mass., for a year—perfect little Reza; his Italian mother Sirena, an installation artist; and his Lebanese father Skandar, an academic.

The Shahids spark long-dormant feelings in Nora, each in different ways: Reza becomes in many ways the son she never had as she conspires to invent reasons to babysit him, and Skandar provides Nora with the intellectual fortification she craves.

But it is Sirena who ignites Nora’s imagination the most. Her artistic desires, left percolating on the back burner for years, soon boil over. After picking up on what she assumes is a mutual sympathy, Nora proposes the two share a warehouse studio to work on their respective art projects—Sirena’s, a vast, interactive simulation of Wonderland; Nora’s, a series of miniature replicas of other artists’ rooms, including Emily Dickinson’s and Virginia Woolf’s.

In Sirena, Nora sees a kindred spirit, a “real artist,” perhaps a younger iteration of what she could have been. But Nora also sees in Sirena the qualities essential to true artists, the willingness to shatter boundaries of decorum and confidences, and to make waves, something the outwardly placid Nora could never do.

Even if you set aside the clear literary association of a character named Nora who builds dollhouses to reflect her suffocating life, Ms. Messud allows her narrator to indulge in many allusions besides, as though she could make her life hew to prewritten narratives.

“Nobody would know me from my own description of myself,” Nora claims, and so she simply makes up her own version, altering details as she sees fit, casting her entire account in doubt as it floats in waters that feel increasingly treacherous.

Ms. Messud’s last novel, The Emperor’s Children, was a sprawling multi-narrative about women living in New York City; The Woman Upstairs is much tighter, drilling deep into Nora Eldridge’s unreliable psyche as its author moves toward an unexpected climax.

The novel’s only genuine flaw is that it cannot sustain the white-hot intensity of its first and last chapters, and its middle chapters sag in comparison. But so much of Nora is economically packed into Ms. Messud’s finely calibrated prose that it feels like the book should be longer than its 300 pages. It is a short novel, but contains so much.