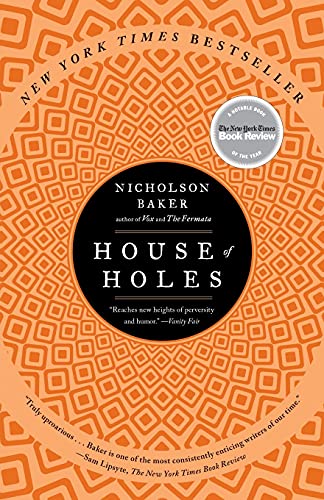 “House of Holes—without much question the most explicit novel ever released by a mainstream publisher—exists less to provoke than to throw down some kind of gauntlet, shatter any limits of literary decorum. Anyone offended by the mere mention of human anatomy should move on.”

“I imagine a sensual man . . . strong-jawed, financially secure, who understands my needs and is not threatened by them.”

“Oh, for heaven’s sake, honey, can you please cut the boilerplate?”

This exchange occurs halfway into Nicholson Baker’s provocative new novel, House of Holes. Except provocative isn’t quite the word for it.

To provoke readers is to nudge them past their comfort zones, ask them to go places they’re not accustomed to going, understand characters they’re not inclined to understanding.

To that end, Mr. Baker has been provoking readers for two decades, first with the phone-sex dialogue of Vox and later 2004’s Checkpoint, in which two characters debate the merits of assassinating the president. He caused a ruckus in the library community with the preservation treatise Double Fold, and three years ago served up Human Smoke, a pacifist’s argument for non-intervention in World War II that a decidedly unprovoked New York Times critic called “a moral mess.”

No, provoking seems inadequate to the task here. House of Holes—without much question the most explicit novel ever released by a mainstream publisher—exists less to provoke than to throw down some kind of gauntlet, shatter any limits of literary decorum. Anyone offended by the mere mention of human anatomy should move on.

House of Holes is a series of episodes featuring characters who have entered an alternate sexual universe by being sucked through a straw, climbing into a laundromat dryer, disappearing into a pepper shaker, et cetera. Once there, they are presented with a bacchanalian utopia where fantasies are indulged, taboos disappear, and nonstop pleasure abounds.

We will be introduced to characters who exchange genitalia, have sex with trees, swim in lakes filled up not with water but with sexual fluids, and—get ready for this one—take a ride on the Pornmonster, a nebulous creature made up of errant penises and vaginas.

The literary community can and probably will resurrect the debate Mr. Baker faced with his 1990s sex novels Vox and The Fermata: Is this literature or officially sanctioned pornography?

Mr. Baker never lets on—and it’s unlikely he even cares. One imagines the author, drunk with unbridled glee at his computer keyboard, howling with laughter as he conjures up countless euphemisms for male genitalia (“Malcolm Gladwell” only the most memorable)—which is probably the best way for readers to enjoy it as well.

No honest appraisal of this novel can be written with mere plot summary, so let’s get specific.

Lila’s solution, like most of the narration, is an amalgam of fairy tale mythology, New Age mysticism, and Penthouse Forum smut:

“We’re going to help you with a dose of the House of Holes’s healing powers. You need a leg wrap with the Cable of Induhash, and you need the Belt of Jingly Bells, and you may need a squirt of my own titmilk. And you definitely also need much higher vantage. Much higher. You need perspective on your life.”

Where Henriette’s “operation” leads is unprintable, but rest assured it has a climax the likes of which you have never before read.

Much will be made about the outrageous sexual exploits and graphic language, but you may be surprised at how, well, childlike it all feels. Indeed, for a book whose subtitle is A Book of Raunch, the prevailing tone is not one of depravity but rather of a teenager whose imagination has been allowed to run wild and can’t believe he’s getting away with it.

Consider this passage, one of the tamest in the novel, about a woman named Polly who is taking a tour of the Hall of Penises, in which male units appear through holes in the wall. When Polly finds one she likes, she gets down to business:

This vivid debauchery is often hilarious and eye-opening, but it does come at the expense of emotional resonance. No one character is given the depth of Vox’s sex hotline couple Jim and Abby (though the Pornmonster has shown remarkable staying power), and after 250 pages of boundary-pushing sex scenes, a certain fatigue may set in.

Is the House a metaphor for something? Are we to take this sexual free-for-all as a piercing commentary on our own puritanical inhibitions? Is the barrage of gutter language meant to deaden its impact and show the absurdity of “dirty words”?

Who knows. If you can get past the first few chapters with your jaw squarely off the floor, you’ll be treated to a novel that’s about as fun and thoroughly unpretentious as literature gets. And that should be enough to provoke anyone to try it.