This Bright River: A Novel 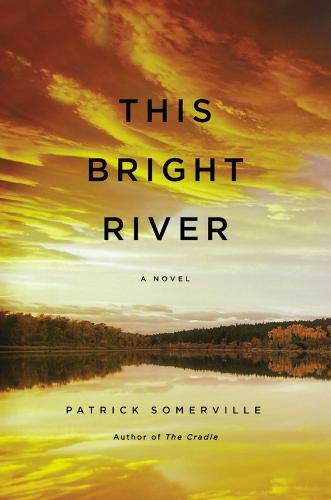 Patrick Somerville’s first novel was a charming little fable about a man dispatched by his pregnant wife to retrieve her stolen childhood cradle before their baby’s birth. Weighing in at less than 200 pages, The Cradle was one of 2009’s great finds, its brevity turning its potentially sappy premise into something almost mythical.

This Bright River, in contrast, is a shaggy dog story, not sloppy so much as roomy. This time around, Mr. Somerville is willing to let his characters ruminate and his prose digress in ways the compactness of The Cradle wouldn’t allow.

It is a novel that could easily lose a third without sacrificing anything in story, but would lose something in storytelling—a semantic distinction but one the author likely finds very important.

“Everybody loves stories,” one character muses, and the people in This Bright River love telling them. Their stories are long-winded, they’re circuitous, and they spend time preparing to tell them (one chapter is entitled, “Very Boring Story I Can’t Quite Bring Myself to Tell Because of How Boring It Is”).

Mr. Somerville throws a lot of balls in the air, but he ultimately delivers a story that’s every bit as moving as The Cradle.

Just how many storylines are there?

The book jacket summary goes something like this: Ben Hanson is 32 and fresh out of jail (for “non-lethal arson”). He has moved back into his Uncle Denny’s house following the man’s death, with instructions from his parents to get it into shape so they can sell it. He has a mind for puzzles, one of which was the genesis for a computer game founded by his friend, a venture he is now squarely on the outside of.

While living back in his hometown, he discovers an old classmate, Lauren Sheehan, still lives there. Lauren comes with baggage of her own (failed marriage, fractious relationship with parents, sketchy doings overseas, etc.) though now she generally keeps to herself, working for the local veterinarian and studying to go back to school. Ben, the driftless ex-con, and Lauren, the damaged woman who doesn’t get too close to anyone, forge a tenuous relationship.

The novel opens a decade earlier with a dialogue between two people in a Madison bar. They share a drink. One man admires the other’s jacket. They go outside to smoke. And then one clubs the other over the head and stuffs him in a trunk.

That cryptic scene forms a second subplot, one that will linger over the remainder of the book.

And what happened to Ben’s cousin (Denny’s son) Wayne while Ben and Lauren were working on their high school science project together? The story goes that Wayne drove up to his father’s cabin way up the Bright River in the dead of winter, either overdosed or suffered a schizophrenic break, and couldn’t make it back before freezing to death. But Ben, who deals in puzzles, knows there’s more to that story, one that his family refuses to divulge.

So that makes three plot strands so far—a tentative romance, a decade-old murder mystery, and an old-fashioned ghost story—and there are still others left for readers to discover. They may be frustrated with the leisurely pace of the first half and with Mr. Somerville’s apparent lack of focus if they’re not already fatigued by all the talking these people do.

The chapters narrated by Lauren seem less urgent than those narrated by Ben, less tied to his attempts at redemption and the cloud of grief still hanging over the Hansons since Wayne’s death, and there’s narration by a third character, one who will factor into the novel’s final act, that seems less relevant still.

But those concerns should abate in the second half, when This Bright River does an about-face and turns into a tense philosophical thriller.

Mr. Somerville pays off on all the disparate threads, and though the climactic scene is a touch ham-fisted, the truth regarding that violent prologue is both stunningly deployed and heartbreaking.

The novel’s centerpiece is an extended conversation between 17-year-old Ben and college aged Wayne, Wayne playing the cool cousin by buying Ben drinks and introducing him to mushrooms.

He begins by telling Ben about a 16th century Spanish monk named Bartolome de Las Casas, who documented the atrocities perpetrated by the conquistadores against the West Indian natives, the scope and casualness of the violence beyond anything we can now comprehend. “The soundtrack of life here in America is those screams,” he tells Ben.

But Wayne’s history lesson eventually wends its way toward a drunken disquisition on the evil inherent in all of us, and how it may be our birthright:

“Families are ostensibly valuable units of organization because the world’s a tough place . . . it can be bad out there, and so if you want to stay safe, if there’s a group of you and you want to stay safe . . . what you should do in this little group is just be sure you all value one another more than you value anything or anyone else in this world, right? And if everyone agrees to that guiding principle and does that, then chances are you’ll all do well because, first off, you’ll never be working at cross-purposes with the people near you . . . it’s effective because you’ve all got one another’s back in a family, right?

“So that means,” Wayne continues, “someone from the outside world comes in and tries to hurt somebody, everyone else is all over it because they’re all tuned in and watching one another and the hurt doesn’t happen, it gets averted, it gets blocked. Then there’s the whole other thing about revenge. . . . What do you think about revenge? In principle. As a principle for guiding behavior, I mean.”

This scene, a nearly 20-page exchange, is a small masterpiece (one that resonates deeper on second read), really the entire novel in miniature. It strikes on the prevailing theme of the book: We are all flowing in our own little rivers.

But when the tide turns rough and you are faced with difficult choices, on which side and with whom are you going to stand? Will you succumb to the evil tendencies within you or rise above them? All the characters in This Bright River have to confront that question; by the end, Ben has his answer.

Mr. Somerville knows his book is not airtight; it has some rough edges, and it’s in the rough edges that he succeeds. It is storytelling for the pure pleasure of storytelling.

He has given us first in The Cradle and now in This Bright River two different ways of approaching the novel, and if it is a preview of this still-young author’s literary trajectory, there is no telling where he will go next.