The Leftovers: A Novel 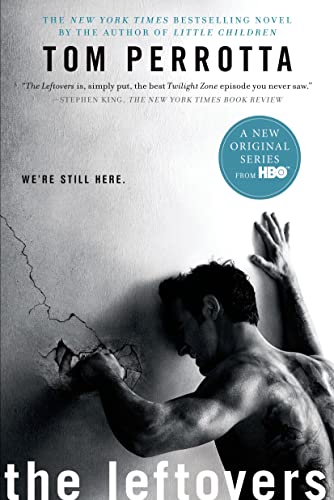 “Despite . . . shortcomings, The Leftovers will still please Mr. Perrotta’s legion of readers, and it’s not a big mystery why: in addition to his generous treatment of all his characters—even the most odious—his prose glides along with effortless momentum. It’s a perfectly competent contemporary novel that had the potential to be a lot more.”

Over the course of six fictional works and two successful film adaptations, Tom Perrotta has staked out his claim as our most popular surveyor of suburbia.

Whether writing about characters trapped in stultifying marriages or a high school go-getter conniving her way to the student body presidency or a health teacher whose errant comment about the pleasures of sex sparks controversy, Mr. Perrotta has shown the ability to delve into weighty issues surrounding ordinary people and present them in compulsively readable narratives.

But The Leftovers, Mr. Perrotta’s ambitious new novel, feels more like a lost opportunity than a step forward. Given its literally larger-than-life premise, you’d be forgiven if you expected author Perrotta to flex some literary muscle, but it’s disappointing how easily the story settles into a comfortable but unchallenging rhythm.

The Leftovers is a glossy portrait of a suburban family’s encounter with full-scale tragedy, the apocalypse made palatable.

The story—and one must credit Perrotta for its timeliness, if not its prescience—begins three years after a Rapture-like occurrence dubbed the Sudden Departure descends on humanity and millions of people disappear without discernment or warning. Mr. Perrotta explores the emotional fallout of this cataclysm by focusing on one particular family in one affluent New Jersey town, the Garveys of Mapleton. None of the Garveys vanished in the Departure, but its effects still pervade all four members: Kevin, who happens to be Mapleton’s mayor; his wife Laurie; and their children, Tom and Jill.

It’s an audacious setup, certainly the most fantastical Mr. Perrotta has yet written, but it’s not meant as science fiction; the catastrophe is left unexplained and serves primarily as a conceit to raise questions about the nature of grief and our responses to tragedy. While some will seek a return to normalcy, what changes would a seismic event like the Departure provoke in others? And how much would they willing to give up to effect that change?

Tom drops out of college and attaches himself to a born-again guru who lost his son in the Departure but now controls a burgeoning self-help business and multiple teenage wives. Jill loses her closest friend and has seen her grades slip, her attitude turn sullen. Kevin, whose status as mayor seems at odds with his passive demeanor, tries to move on after Laurie leaves the family to join a fledgling organization called the Guilty Remnant.

How you feel about The Leftovers may well come down to what you make of the Remnant. Is it a plausible response to what its followers see as God’s punishment for a debauched culture or a dangerous cult with arbitrary rules and deluded members? They dress all in white and speak to no one, and at night they go out in pairs and stare soundlessly at others, always with a lit cigarette in hand. Their mission statement is a bit murky but entails proving to God that when the second Departure takes place, the Remnant’s members will be worthy of the sacrifice.

This is all presented without judgment or condescension from Mr. Perrotta, whose lack of moralizing on behalf of his characters is one of his finest attributes (recall the sensitive portrayal of the neighborhood pedophile in his book Little Children; he ended up coming off better than the reactionary suburbanites who made his life miserable).

Unfortunately, Mr. Perrotta’s characters here are often too generic to require any moralizing. Kevin, for one, is such an affable guy, polished at every angle with good intentions, that he is rendered wholly forgettable.

Because the action takes place three years and not three days after the Departure, many of the characters have already made their life-changing decisions when we meet them. The upshot is that Mr. Perrotta expects you to take some leaps of logic that his own characterization doesn’t support. Nothing in the text, for example, persuades us that Laurie, a heretofore clear-headed mother, would be the type to suddenly disavow her family, nor make the decisions that lead to the book’s climactic event.

Despite these shortcomings, The Leftovers will still please Mr. Perrotta’s legion of readers, and it’s not a big mystery why: in addition to his generous treatment of all his characters—even the most odious—his prose glides along with effortless momentum. It’s a perfectly competent contemporary novel that had the potential to be a lot more.