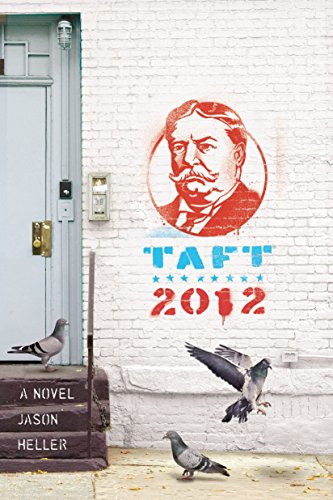 “As a fairy tale, Taft 2012: A Novel is a welcome tonic to the bottomless cynicism that can consume our politics. If you’re after something more biting, all you need is your remote control.”

Our political system is a theater of the absurd. Would anyone disagree?

As we brace ourselves for the 2011–2012 yearlong election season, political humorists can rest assured there will be no shortage of material keeping them engaged and employed. But they must be careful not to settle for easy parody when their targets often do such a good job of parodying themselves.

Not for nothing can “The Daily Show”’s Jon Stewart, after running a clip of a political figure, get laughs simply by staring into the camera—the politician’s words offering all the setup and punchline Stewart needs. Tina Fey infamously lampooned then-vice presidential candidate Sarah Palin on “Saturday Night Live” by repeating verbatim Palin’s own words from an earlier interview.

These days, a satirist has to raise his game in a big way to make a point, and it doesn’t come much bigger than the subject of Jason Heller’s winsome novel Taft 2012. In the book, William Howard Taft, our 27th president, vanishes inexplicably on the day of his successor’s inauguration in 1913 and reappears just as inexplicably on the White House lawn in 2011.

After a skeptical nation is given proof that the robust man not seen in nearly a century is the former president, Taft is soon held up as a paragon of old-fashioned values and a newly-formed political party urges him to run in the 2012 presidential election.

This premise allows Mr. Heller to indulge in some whimsical—if obvious—fun, as Taft adjusts to a world that has advanced in unthinkable ways (“. . . the intrepid chefs had persevered by consulting an unseen scholar the agent had called Goggle or Google or something to that effect. God bless this encyclopedic Mr. Google, whoever he was.”). He speaks loquaciously to a society more accustomed to text messages and thinks tipping a quarter for a meal is “too kind.”

Helping Taft acclimate to his new surroundings are three people: Susan Weschler, a historian whose specialty is the Taft presidency; Ira Kowalczyk, a Secret Service agent assigned to protect Taft after first shooting him on the White House grounds; and most importantly, Rachel Taft, the president’s great-granddaughter who serves as an independent congresswoman in Ohio.

Taft spends his second life playing grandfather to Rachel’s daughter, embarking on a buddy-buddy road trip with Kowalczyk, and learning the ropes of the new political world with a fawning Weschler. All the while, a movement christening itself the Taft Party builds momentum.

At its best, Taft 2012 swiftly and astutely explores the fickle nature of political support, and why folks latch onto the candidates they do. Several times through the novel, the point is made that President Taft was a victim of bad timing, having served between the transformative administrations of Theodore Roosevelt and Woodrow Wilson.

Re-contextualized in our present climate, however, Taft’s formerly uninspiring credentials (an aversion to war, a 1 percent business tax) are just what a disenfranchised part of the electorate has been waiting for.

Interspersed among the narrative are notes and errata concerning the Taft phenomenon, interviews with talk show hosts and polls (one Fox News poll rates Taft as the biggest newsmaker of 2011, ahead of the allegedly filicidal Casey Anthony). The book is also interactive: the last page invites readers to follow the campaign all year at a specially designed website, where they will encounter all manner of political ephemera, as well as a link to the resurrected president’s Twitter feed.

But any satirical elements of the story prove underwhelming, because Taft 2012 doesn’t really play for those stakes. Mr. Heller gives too much credit to the cable news exemplars to be able to dispense worthwhile information rather than ratings-driven culture war, and as a modern day politician, Rachel Taft’s quixotic crusade against a processed food conglomerate seems naive.

Ultimately his satire fails because Mr. Heller simply doesn’t have the heart to bare enough teeth into his main character. He falls into the same trap as the Taft Party’s acolytes: holding the president up as a bastion of bygone values when a more ruthless satirist might have jumped headlong into the murky nature of generational conflict. Do a quick mental accounting of the major social changes of the last century and ask yourself how long it might take someone plucked from that era to adjust; Taft accomplishes it in almost no time at all.

Even more problematically, Taft is portrayed as a figure with seemingly no political agenda. This fits with the historian Weschler’s account of Taft as the reluctant president, the man with too much honor to get dirty on the campaign trail, but if history has taught us anything, it’s that the media and their immediacy may have changed, but the tactics have always been cutthroat.

So when Taft tells his followers in an impassioned call to arms, “The true work of good, honest government is more important than any one presidential campaign, than any one old politician . . . more important . . . than the name Taft itself,” it gives away Taft 2012 for what it really is: a fairy tale.

That might sound harsh, but it’s not meant to be. By choosing as his subject a U.S. president that nobody knows much about (besides his girth), Mr. Heller is able to impart on him a purity much like we’ve assigned to the Founding Fathers: figures from our mythologized past that remind us of how much progress we’ve made and what we can yet accomplish.

As a fairy tale, Taft 2012: A Novel is a welcome tonic to the bottomless cynicism that can consume our politics. If you’re after something more biting, all you need is your remote control.