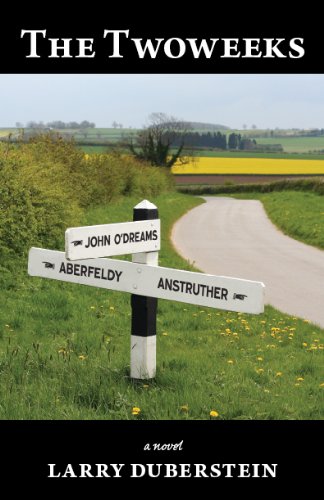 “The Twoweeks is written by a veteran author who is not trying to dazzle with literary showmanship but with intimate storytelling.”

A pitch for a story: Two characters, unhappy in their own marriages, acknowledge their mutual attraction and begin a torrid love affair. After some time they break it off. Recriminations and regrets follow. Life-altering decisions pertaining to futures must be made. Welfare of children gets balanced against power of desire. We turn the pages anxiously to see whether they follow their heads or their hearts.

Given its familiarity, authors have extracted an impressive amount from that basic story arc, but one wonders at this point: How much is left to say? What possible variations remain unexplored?

Larry Duberstein’s The Twoweeks does its best to add a new perspective, a classy but ponderous effort that compares the lust of an affair with the cool aftermath of memory. Though parts of the novel feel labored over, it succeeds in crafting a literary domestic romance that radiates goodwill.

After a prologue whose existence is not immediately obvious, we are introduced to Cal Byerly and Lara Cleary, set to revisit a period 30 years before when they carried on a preplanned affair they call The Twoweeks.

Lara had kept a journal of their fortnight together, and together again they pit what the journal says against their memories, often finding gaps and discrepancies.

Cal had met Lara through his wife Winnie, as the two women had long been friends. Along with Lara’s husband Ian, the four frequently spend time together, and a nascent attraction buds between Cal and Lara. Eventually Lara proposes The Twoweeks, which despite being done with her husband’s consent, still provides her with the requisite amount of doubt:

“To Lara, it could be confusing. She believed in fidelity, yet at the same time fidelity could be made to seem almost silly. Small-minded, outmoded . . . there were forces in the culture which made it feel that way. You could lose track of who you were, or who you meant to be.”

Her offer is delivered to Cal as an ultimatum: He can either spend these two weeks with her or the relationship will never be consummated. With his marriage to Winnie on the rocks, Cal devises a strategy by which Winnie will be allowed to take a week or two off from the family (the Byerlys have two kids), and upon her return Cal would then get his own respite as well.

And so The Twoweeks begins. Though Lara sees it as purely temporary, a way to work out her own confused feelings, Cal clearly hopes their fortnight is just the beginning. When The Twoweeks ends, Lara insists that she and Cal go their separate ways. The remainder of the novel gauges how successful she is.

The lion’s share of the narrative is given to Lara’s contemporaneous account of their affair, with their older selves reflecting back on it three decades later. It is the most dynamic chapter in the novel, and it is all recounted by Mr. Duberstein with the utmost affection for his two protagonists.

Though Lara entered The Twoweeks with reservations, it is easy to believe in their attraction, and even easier to believe they would effortlessly retain their playful, gently combative banter. That they can speak in a shorthand—Lara’s ultimatum to Cal is referred to as The Sentence; a further incident after The Twoweeks is dubbed The Two Hours—is endearing.

The Twoweeks also sometimes feels too cute, almost stagy (although Cal, as an actor, would be accustomed to ascribing lofty names to parts of their story), and some readers may have trouble with some of the overstuffed prose.

The Twoweeks is not meant as an oversexed romance or a suspenseful melodrama. It is a sensitive, languid (perhaps too languid: despite its slim length the novel drags in places) story that is assured in what it wants to say. The Twoweeks is written by a veteran author who is not trying to dazzle with literary showmanship but with intimate storytelling.