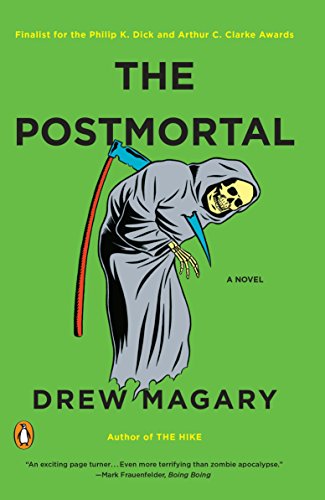 “The anarchic breakdown of law and order captivated anyone with a television set, perhaps becuase watching lawless chaos provides us with an unusual, vicarious thrill. But what if such behavior were the new normal? And what if the reason begins (as it always does) with such pure intentions?”

Earlier this month, in August 2011, the eyes of the world fixated on England as widespread rioting seized the country, leading to thousands of arrests, millions of Euros in property damage, and even a handful of deaths. The anarchic breakdown of law and order captivated anyone with a television set, perhaps because watching lawless chaos provides us with an unusual, vicarious thrill.

But what if such behavior were the new normal? And what if the reason begins (as it always does) with such pure intentions?

That’s the future Drew Magary imagines in his lighthearted-turned-unsettling novel The Postmortal, which takes a fairly stock idea—postponing death—and spins it into something entertaining and provocative.

An opening note from the year 2093 explains that the book in front of us is a cobbled-together account of what happened to “the former United States” from the computer tablet of one man, John Farrell.

“What happened” was we discovered the cure for aging. With one simple injection, people could freeze their lives, living for innumerable generations while never showing a single wrinkle.

Mr. Magary spends the book’s opening pages gleefully skewering the endless hangover of eternal life. Las Vegas resorts provide the cure on demand so their patrons can spend an eternity winning back what they’ve lost in the casinos. Marriage becomes a casualty as cured patients realize they don’t want to spend thousands of years with the same person. When the president initially forbids the cure, a Rush Limbaugh knockoff urges his listeners to stockpile weapons against a government that would let them die.

But the fault lines to this nonstop party start showing almost immediately.

When Farrell consults the doctor—an orthopedist performing the operation on the black market—he provides a caveat: The cure merely ensures death will not come naturally. It does not prevent disease, nor stop a bullet from doing its work. Anyone receiving the cure, in other words, is guaranteed a painful, possibly violent death.

Anti-cure extremists move from protesting its legalization to bombing cure facilities. One unrepentant bomber explains that he kills people because without death, we don’t learn “a thing about life.”

There have been many other fictions that have speculated what would happen if we could cheat death, and they all tend to arrive at the same conclusion: total disaster. The Postmortal is no different, positing a bleak future where resources are exhausted, gangs run roughshod, and fatal viruses spread like wildfire.

If this novel has one significant drawback, it’s that even if the particulars remain unknown, its general trajectory follows a path familiar to anyone versed in dystopian stories. The broad satire of the first half gives way to much more sinister developments in the second, and its thrilling conclusion feels almost preordained.

Mr. Magary is a writer for Deadspin, a website that offers sports news in short, snarky bursts, and indeed, much of his novel is meant for similar consumption. It never spends too much time in one place—or one time period—and its pace rarely lags. But filtering these events through one person sometimes narrows the true scope of the premise. Our only glimpse into the worldwide effects of a death cure are periodic news roundups Farrell assembles, but those aren’t much longer than Twitter posts.

The Postmortal is essentially a book of ideas attached to a futuristic thriller, but its best ones provide enough empirical evidence to restore death’s reputation.

When he learns his father is dying from a tumor and has refused chemotherapy, Farrell asks why someone with the cure wouldn’t want to beat the disease and prolong his life indefinitely. His father shares the wisdom Farrell himself will soon learn:

“Death shouldn’t be some big tragedy anymore,” he says. “Life is just right like this.”