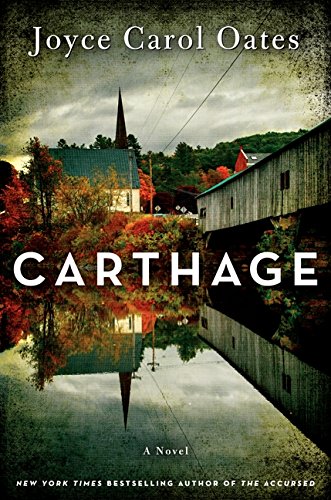 “Carthage shows an author still in command of her vision . . .”

Consider his predicament, standing in front of the O section of the local library or bookshop, dozens upon dozens of her books staring back forlornly, 50 years’ worth, in all forms and genres, fighting for attention.

Where does one even start? Does he first reach for the psychological family dramas (We Were the Mulvaneys)? Or perhaps the big gothic romances (The Accursed)? What about the epic re-imaginings of famous people (Blonde)? And those are just the ones under her own name!

The good news is that Carthage, roughly Ms. Oates’ 42nd novel, will serve as a suitable introduction to any unsure newcomers, as well as a powerful reminder of why the rest of us keep coming back.

What seems like a straightforward murder mystery evolves into a complex tapestry of conflicting voices and motivations, as ever touching on themes of identity, suburban angst, and violence: the dark secrets lurking within the postwar American family.

Carthage begins at full sprint: Cressida Mayfield, the 19-year-old daughter of the town’s former mayor, goes missing during the summer of 2005. Her father Zeno, along with scores of volunteers, canvasses an Adirondacks nature preserve in hopeful desperation.

As the search continues, Zeno and his wife Arlette soon have to reckon with the notion that Cressida might not have been dragged into the woods of upstate New York but willingly accepted her fate.

The tomboyish daughter, the smart one, alone in her room all those nights with her M.C. Escher drawings and her brewing rage. Unable to compete with her more mannered, elegant older sister Juliet, the beautiful one.

The daughter who hates her name, the self-conscious antiquity of it, that puts up a wall before she even gets to know someone. Who once told her mother, when asked why she never smiled in any pictures, that one of those pictures would eventually be used in her obituary, and “you’d be a fool to smile at your own funeral.”

Then a development: Cressida was last seen coming out of a bar (so unlike her!) with local war hero Brett Kincaid, who until a week before had been engaged to Juliet. He can only recall fragments about that evening, but when police found him, his Jeep had skidded off a road and blood matching the missing girl’s type was splattered all over it.

The first third of this novel focuses at great length on this investigation, exploring the depths of the Mayfields’ grief, and of the profound change in the corporal now suspected of murder, the soldier whose discharge from Iraq is shrouded in shame and mystery.

A novice Oates reader, accustomed to the rhythms of standard suspense fiction, might expect the story to stay along this track, but the author audaciously thickens the plot by several degrees.

The action jumps several years to a Florida university, where a mercurial, pseudonymous professor is trying to infiltrate a maximum-security prison to continue his Geraldo-esque exposés on the social welfare system.

This lengthy chapter, which occasionally feels in tone and pace like it dropped in from another story altogether, is the novel’s riskiest section, but it’s one that pays off retrospectively: Only later can the reader understand the significance this digressive meditation on the penal system has on the circumstances of Cressida’s disappearance.

Despite its 500 pages, Carthage maintains a brisk pace by featuring a JCO prose trademark: the torrential interior voice. She is able to drill into her characters’ heads so deeply that their thoughts feel less like passive reflections than as active kinetic bursts. It’s an effect that few authors do as well, and Cressida Mayfield, filled with self-loathing and accrued resentments, is the perfect vehicle for it.

Which makes it all the more striking that she can’t achieve the same depths with Brett Kincaid, who stealthily emerges as the book’s most important character but the least understood. What happened in Iraq to turn this formerly well-mannered, generous young man into a medicated, guilt-ridden shell prone to violent blackouts is the book’s true and lingering mystery.

Carthage shows an author still in command of her vision, one still grappling with the worst impulses of human behavior and with our capacity to forgive them. Don’t let her machine-like productivity fool you; more than 100 books later, Ms. Oates’s fiction remains as potent as ever.