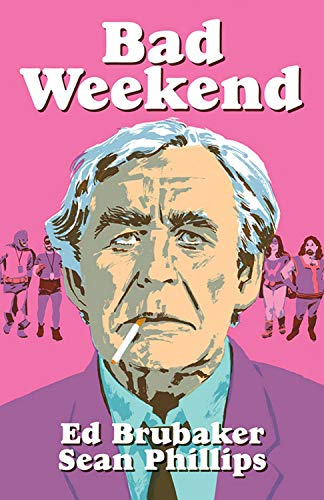 “Bad Weekend is crime comics at their finest, so why not waste a boozy weekend with this graphic novel.”

Writer Ed Brubaker and artist Sean Phillips have been working long and hard at the violent and compelling world of Criminal since at least the early 2000s. Now, in 2019, Bad Weekend, which includes old characters from other Criminal story arcs as well as brand new ones, adds a new layer to the Brubaker-Phillips oeuvre. It is a welcome and beautiful edition to a sleazy, sordid bibliography.

Bad Weekend takes place over a single weekend in some no-name American city. In July 1997, Jacob Kurtz, a former comic book artist who has turned to the family business of counterfeiting, gets a new job as the chaperone and shadow of the legendary Hal Crane. Once the toast of the comic book world in the 1950s, Crane has become a bitter alcoholic with a vendetta against the comic book industry and the world. Jacob learns by Saturday that Crane is also amoral and more than willing to engage in criminal activity. Specifically, besides putting his signature on forged cartoon cells, Crane brings Jacob along on a hunt for an old Crane comic strip that has wound up in the hands of a private collector.

Like the other entries in the Criminal universe, Bad Weekend is a noir story with a human core. Crane and Jacob simultaneously conform to certain crime fiction archetypes (the alcoholic and the goon with the good heart) while also remaining unique creations. Criminal fans will immediately recognize Jacob from the 2009 graphic novel, Bad Night. In that story, Jacob is a working comic strip artist and author who is called upon to return to his older occupation of forgery. Much like the private eye Frank Kafka that Jacobs pens in Bad Night, Hal Crane in Bad Weekend is on the hunt for something that he will never find. And like a lot of Brubaker’s yarns, Bad Weekend begins in media res and ends without a neat and tidy conclusion.

Bad Weekend shows off the talents of all three men who created it. Brubaker’s writing is as crisp and direct as it always is. As an example, while Crane and Jacob talk in the back of a police car, Crane, who was once Jacob’s boss during the late 1980s, tries to talk his former protégé into returning to comics. “I thought you said comics was dying?” Jacob reminds Crane. “Comics have been dying since 1954…don’t let that stop you,” the older man replies. Phillip’s gritty pencils give real flesh and blood to Brubaker’s words, and illustrator and colorist Jacob Phillips mixes bright pinks, subdued blues and reds, and tons of black.

Bad Weekend is a near-perfect addition to the Criminal canon. It is a bleak tale with familiar faces, but not so in-depth that it could turn off first-time readers. Bad Weekend is crime comics at their finest, so why not waste a boozy weekend with this graphic novel.