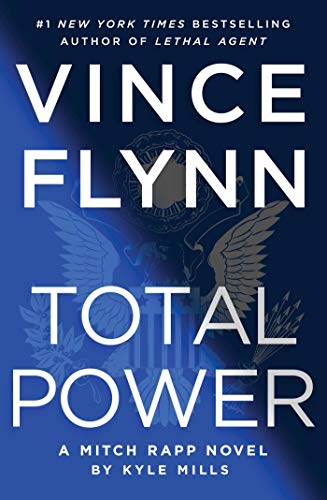 “Total Power is the sort of top-of-the-charts bestseller publishers are relying on among fiction titles to maintain their bottom line during trying times.”

It’s a race against the clock for CIA assassin Mitch Rapp when America’s power grid is attacked by a domestic terrorist enlisting ISIS support to carry out his diabolical plot against his own country.

The hunt is barely underway when the cyberterrorist strikes, and the United States is plunged into chaos. With power completely lost across the country, computer networks are down, communications are disrupted, and food is quickly running out.

Can Mitch Rapp find this madman and reverse the shutdown before America is irretrievably lost?

Total Power is the 19th Mitch Rapp novel in the late Vince Flynn’s ongoing franchise, a series that seems to extend back to the dawn of time, and this one is the sixth written by Kyle Mills.

Mills seems eminently qualified to write spy thrillers, as his father was an FBI agent, Legal Attaché to the United Kingdom, and a director of Interpol. Mills grew up in the milieu and apparently absorbed much of the fantasy surrounding the lifestyle.

After he and his wife moved from Baltimore to Jackson Hole, Wyoming, he spent time working in a bank and rock climbing on weekends. Being a finance major (all this according to the autobiographical note on his website) he’d always avoided college English courses “like the plague,” but when the urge to write a novel suddenly struck, he plunged right in.

Why is any of this relevant, particularly where he’s already authored 21 books, including six in this series?

Perhaps because when it comes to cranking out New York Times bestselling novels, which he does as a matter of routine, Mills doesn’t show much of an aptitude for either style or substance. A story seems to be nothing more than a blank, rigid rock face he’s decided to climb, and while he shows a decent sense of craft in plotting a tale that gets him from the bottom to the top, that’s pretty much it. Obviously it’s more than enough, though, to keep him at the top of the charts, so there’s something to be said for creative rock climbing, it would seem.

While Mitch Rapp is the star of the show and the big draw for his cadre of fans, Mills spends absolutely no time developing the character. All you need to know is that he’s CIA, he has no patience for interrogation, and he’d rather kill people than look at them. Period. End of story.

As for the bad guy in this one, John Alton is a brilliant consultant working on contract for the Department of Energy’s Office of Cybersecurity, Energy Security, and Emergency Response. He’s authored a comprehensive report on the vulnerability of America’s power grid, and while his client takes the bad news very seriously, Congress doesn’t. Alton’s contempt for the government as a whole is overarching, and he has no hesitation when it comes time to implement his secret plan to destroy the country.

There’s a scene partway through the story where Alton harangues his ISIS terrorist dragoons for their religious myopia and general all-around stupidity: “And you . . . are a cartoon villain”!

Alton is the flattest, least interesting, Snidely Whiplash sort of bad guy you’d ever care to meet in a thriller. Although he has shopped his plan to the Russians, the Chinese, and a bunch of other international adversaries, he’s not interested at all in becoming filthy rich. He wants no financial compensation. He’s only doing this because he’s, well, because he’s totally and completely nuts. That’s it. He’s like a little kid who can’t wait to turn off the light on his mother as soon as she gets settled in the bathroom. No subtlety, no extra dimensions to contemplate, no nothing. Just bonkers. Pure and simple.

The only vaguely amusing scrap of writing in this novel comes very late, when Mitch and sidekick Scott Coleman take a break from torturing one of the ISIS terrorists to talk about the condition of a colleague caught up with Rapp in an explosion. “Is he going to make it?” Mitch asks. “You know Mas,” Coleman replies. “He’s like shower mold. You just can’t kill him.”

That sound you hear is the reviewer scraping the bottom of the tomato can for something good to tell you about this novel.

Total Power is the sort of top-of-the-charts bestseller publishers are relying on among fiction titles to maintain their bottom line during trying times. It’s almost cynically facile, and it panders to a crowd that loves quick justice at the end of a gun or on the waterboard table.

And yes, it offers up a very convincing scenario of yet another apocalypse that could indeed wipe out America as we know it. Just what everyone needs for entertainment right now, don’t you think, when things are already as nightmarish as you thought they possibly could be?