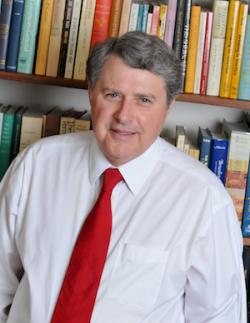 Besides his published books and articles, he has served as an advisory editor for the American Social Experience series (New York University Press); the Conversations with the Past series (Brandywine Press); and the Critical Historical Encounters series (Oxford University Press).

Among his many activities Dr. Martin has appeared as a talking head in historically related television programs and also advised on movie scripts with historical themes.

He currently serves on the Board of Trustees of the Fort Ticonderoga Association and has been an historian adviser to the Oneida Indian Nation of New York.

Dr. Martin is currently finishing two books: one on the remarkable American Revolution, and a second one on George Washington, the Newburgh Conspiracy, and success and failure in Revolutionary leadership.

A Respectable Army: The Military Origins of the Republic, 1763-1789 (The American History Series)

Drinking In America: A History

All the Frequent Troubles of Our Days: The True Story of the American Woman at the Heart of the German Resistance to Hitler

“All the Frequent Troubles of Our Days is an exceptionally well-crafted book.”

I Marched with Patton: A Firsthand Account of World War II Alongside One of the U.S. Army's Greatest Generals

“The pages turn easily, and the story moves quickly from chapter to chapter in this fascinating memoir of a common solider in World War II.”

Revolutions: How They Changed History and What They Mean Today

“Revolutions should attract a broad readership curious about the ways in which human upheavals have, at least in some instances, affected and even altered the course of world histo

United States of Socialism: Who's Behind It. Why It's Evil. How to Stop It.

“an entertaining, thought-provoking book that will and should command a widespread readership.”

These days many historians would ask: Why another book about a well-known founding father, in this case a dual biography of Benjamin Franklin and George Washington?

To Begin the World Over Again: How the American Revolution Devastated the Globe

The main title of this massive tome comes from Thomas Paine’s Common Sense.

No Surrender: A Father, a Son, and an Extraordinary Act of Heroism That Continues to Live on Today

The Widow Washington: The Life of Mary Washington

The Widow Washington represents an engaging, although not a necessarily convincing new portrait of George Washington’s mother, Mary Ball Washington.

“As a reference work, Desmarais’ study succeeds in its intended purpose.”

Hitler’s Death: The Case Against Conspiracy

“Hitler’s Death represents a useful contribution to the neverending literature dealing in some way with the life and death of this most despicable of human beings.