All the Frequent Troubles of Our Days: The True Story of the American Woman at the Heart of the German Resistance to Hitler 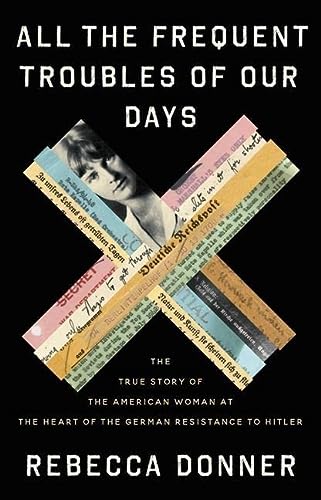 “All the Frequent Troubles of Our Days is an exceptionally well-crafted book.”

The more one reads about Adolf Hitler’s brutally totalitarian political/social regime, the more one realizes what a horrifying perversion of human decency Nazism truly was. Hitler became Germany’s chancellor in January 1933, and by the time he blew out his own maniacal brains in late April 1935, he had destroyed some 50,000,000 or more lives. Among his victims was Mildred Fish Harnack, the subject of this gripping new book by Rebecca Donner.

Born during 1902 in Milwaukee, Mildred would attend the University of Wisconsin in Madison, graduating as a literature studies major. She met her future husband Arvid, a native German who was then at UW pursuing a Ph.D. degree. They married in 1926. Once in Germany, Mildred did some teaching, writing, and translation work while also seeking to earn a Ph.D. degree in literary studies.

Besides their devoted love for one another, Mildred and Arvid viewed the rise of Hitler and his Nazi government as a metastasizing cancer that would eventually consume Germany. They and a cadre of their well-placed friends organized their own resistance Circle, described in detail by the author. Mildred stood out in her efforts as an American doing everything from saving Jewish lives to writing and spreading leaflets calling for the masses to rise up and obliterate Nazism before it destroyed their existence.

Somewhat ironically, this courageous underground activity did not cause Mildred’s and Arvid’s fatal reckoning with the ever-snooping Gestapo. Influenced by Marxism, then in fashion among left leaning intellectuals, they convinced themselves that capitalism was a major source of human poverty. Apparently ignorant of the extent of mass suffering and murder taking place in Joseph Stalin’s repressive communist regime, Mildred, Arvid, and their espionage Circle allowed themselves to begin functioning as spies for the Soviets.

An enciphered Soviet message beamed out in 1941 expressed concern about no longer receiving radio communications from members of the Circle in Berlin. The text carelessly exposed the names of six collaborators, among them Mildred and Arvid. This message was intercepted by Hitler’s signals-intelligence agency. The code breakers took a year to decipher the dots, dashes, and words, with fatal consequences for all those named, and many others engaged in resistance work.

The Gestapo succeeded in thwarting Mildred’s and Arvid’s attempt to flee Germany. What followed is a story of pitiless incarcerations, brutal interrogations, privately held treason trials, and death sentences. Showing no mercy toward those trying to undermine the Nazi regime, Arvid was hanged in December 1942.

The initial sentence for Mildred was six years of hard labor. Hitler, however, personally intervened and called for a sham second trial that resulted in her death by guillotine in February 1943.

Author Rebecca Donner, a great-great-niece of Mildred, writes with clarity and intensity of purpose. She does not hold back in presenting the gruesome realities of life in Nazi Germany. Her descriptions regarding the last days for Mildred, forced to live and then beheaded in the squalor of the Ravensbrück concentration camp (exclusively for women) north of Berlin, are graphic; but they are also accurate and truthful, even in the revelation of what happened to the lifeless bodies of Mildred and many other tortured women convicted of various crimes.

Donner decided not to follow strict chronology in developing her story line. The effect is to build suspense, even as she introduces a host of interesting characters—friends, associates, and acquaintances of Mildred. Noteworthy names include the novelist Thomas Wolfe and theologian Dietrich Bonhoeffer, one of Arvid’s cousins.

Then there is the flamboyant Martha Dodd, the scandalous daughter of William E. Dodd, the American Ambassador to Germany from 1933 through 1937. Martha may have been a social butterfly with famous lovers, and she also involved herself in espionage activity with the Soviets during the months of her close friendship with Mildred.

Overall, All the Frequent Troubles of Our Days is an exceptionally well-crafted book. The story line will keep readers turning pages, perhaps even hoping that by some positive twist of fate Mildred, Arvid, and others involved in their resistance Circle will survive. That they didn’t does not mean that they failed, rather that they nobly tried to succeed, as dramatically and poignantly presented by Rebecca Donner in this very moving and thoughtful book.