I Marched with Patton: A Firsthand Account of World War II Alongside One of the U.S. Army's Greatest Generals 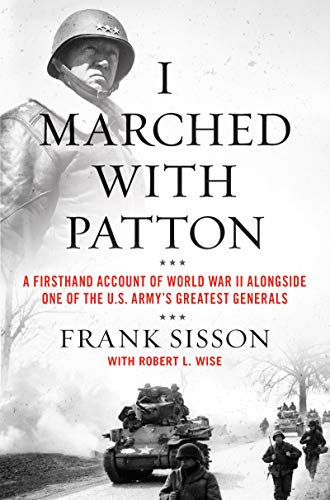 “The pages turn easily, and the story moves quickly from chapter to chapter in this fascinating memoir of a common solider in World War II.”
Frank Sisson, who grew up in rural Weleetka, Oklahoma, during the Great Depression, reached 18 years of age in 1943. He signed up at his local draft board, did his basic training at Fort Sill in Oklahoma, became an artillery specialist at Camp Bowie in Texas, and got deployed to France as the Battle of the Bulge was getting under way in late 1944.

Sisson’s father had passed away when Frank was a young teenager, which caused him to drop out of high school and go to work to help provide for his family. Once in Europe, he served in the 667th Field Artillery Battalion assigned to the Third Army under the command of controversial General George S. Patton.

Sisson, quickly promoted up the ranks from a private to corporal and then to sergeant, was in charge of a small unit that took life-threatening risks on several occasions. As forward observers, they strung communication wires closer to enemy positions to support the more accurate aiming of heavy artillery fire in attacking German forces.

Readers may wonder why this book contains so much emphasis on Patton when Sisson had so little direct contact with him. Part of the reason is that Sisson viewed Patton as a truly charismatic leader, the kind who stirred young soldiers to face the horror of combat and even sacrifice their lives, if necessary, in serving the greater cause of liberating Europe.

As the story evolves, Sisson points out that, having lost his own father at a tender age, Patton became something like a substitute, second father figure to him. As such, to describe his own experience was very much inseparable from the person who kept inspiring him to fight, no matter what risks he faced over and over again in combat.

There’s no doubt that the hovering presence of Patton adds a broadened sales dimension to this memoir. But Sisson’s account of going to war is fully worthy of its retelling. It’s a coming of age story about how a naïve teenager learned to cope with the harsh realities of life as he fought against the Germans into May 1945 and then morphed into a military police investigator in Berlin for a year after the war in Europe came to an end.

The plot line operates on more than one level. For example, Sisson shares the excitement of receiving letters from his mother and a girlfriend named Alice; however, Alice’s letters become noticeably infrequent, a plot line that does not end happily. Then there are the descriptions of his immediate comrades, a colorful collection of young men reckoning with war—and their hopes and fears—as they keep pushing forward into Germany.

Most moving is Sisson’s involvement in helping to liberate Hitler’s death camp at Dachau, only a few miles outside Munich. The horror of this graphic scene—and the tenderness of Sisson’s actions—is beautifully conveyed in genuinely moving prose, with compliments to writer Robert L. Wise.

Not to be neglected is the postwar action of Sisson as a MP investigator in Berlin. The story of getting a drunken American soldier out of the hands of the Russians and being shot at while driving away is page turning material, as are other close calls described throughout the book.

Sisson has little good to say about the Russians and the brutality they brought to the war. This characterization reflects Patton’s thinking that the expansive Soviets needed to be halted in their aggressions before it was too late for the welfare of civilization. For Sisson, it’s safe to say that the Russian allies were just as dangerous an enemy as Hitler and his Nazi collaborators.

As a “firsthand account” of the realities of actually experiencing combat during World War II, this volume is full of drama and pathos, all the way to the revelation in the epilogue about Frank Sisson’s genealogical forbears. The pages turn easily, and the story moves quickly from chapter to chapter in this fascinating memoir of a common solider in World War II.