No Surrender: A Father, a Son, and an Extraordinary Act of Heroism That Continues to Live on Today 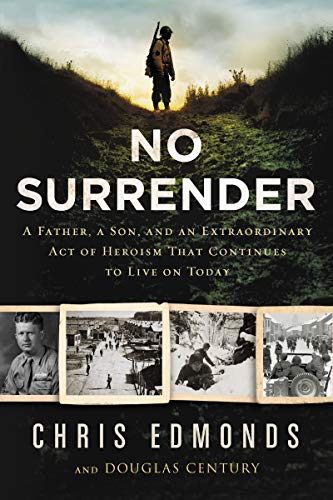 Many stories have survived about acts of heroism in World War II. This book beautifully captures one of these events, involving Master Sergeant Roderick Waring “Roddie” Edmonds.

Born in 1919, Roddie grew up in humble circumstances just outside of Knoxville, Tennessee. On the whole, he was a good kid who enjoyed attending school while also developing a deep Christian faith in the transforming power of Jesus Christ.  Like so many young men of his particular age group, events that produced World War II eventually led him to engaging in the awful realities of combat service in Europe. Roddie survived the war and returned to the Knoxville area where he lived out his years until heart disease ended his life in 1985.

Like so many World War II veterans, Roddie did not talk much about his wartime experiences, but he saved diaries in which he described his frontline arrival in the Ardennes just before Adolf Hitler launched his last gasp Battle of the Bulge campaign.

Twenty years after Roddie’s death a granddaughter asked to read the diaries, carefully preserved in an old cigar box, based on completing a college assignment to identify and describe a “notable experience” of a relative, “ideally an oral history of that person.” What granddaughter Lauren discovered was information relating to her grandfather’s raw courage in standing up to a Nazi death threat, which helped save the lives of many of his Jewish comrades while incarcerated in a German POW camp, Stalag IXA.

Seeking to learn more about the events recorded in the diaries, Lauren’s father and Roddie’s son, author Chris Edmonds, began a long journey to find out the details of what really happened at Stalag IXA. Roddie had recorded the names of many of his fellow soldiers with whom he worked closely and experienced combat. Edmonds explains the process by which he gathered information through meetings with these surviving buddies, now getting into their nineties. They were replacement soldiers belonging to the 106th Infantry Division, placed on the front line, then quickly overrun by this last, massive Nazi counteroffensive (‘hell appeared like a ghost in the forest,” in mid-December 1944.

Much of the rest of this page-turning book focuses on the capture of Roddie and thousands of other GIs of the 106th Division and their death defying experiences as POWs. Survival was not easy. Roddie ended up incarcerated with some 1,292 noncoms at IXA close to Ziegenhain, Germany. What food was available was virtually inedible; maintaining personal cleanliness was impossible; freezing cold resulted in bad cases of frostbite; and such horrible diseases as dysentery and lice-related illnesses became commonplace. Rapid loss of weight led some men to give up and just wait to die. The German guards were anything but devotees of the Geneva Convention. Try to escape, and some form of brutal killing was the warning meted out to anyone else thinking about getting away.

Master Sergeant Roddie was the ranking non-commissioned officer present at IXA. He not only worked to keep up the spirits of his fellow POWs, but he also, in more than one incredible act of personal bravery, defied the orders of Major Siegmann, the district Stalag administrator.

Early on the morning of January 27, only Jews in the American ranks were to fall out for inspection. Understanding what might happen to these men, Roddie stood before Siegmann in open defiance with all 1,292 men also present. Siegmann demanded that only the Jews, around 200 in number, remain. He ordered all others to go back to their barracks, but they held their ground.

Siegmann confronted Roddie, who told the angry Nazi officer that “’We are all Jews here.’” Siegmann pulled out his Luger, pointed it straight at Roddie’s head, and threatened to murder him if the Jews did not identify themselves. Roddie didn’t flinch with the gun staring at his face. Finally, the major stomped away, defeated by the determined courage of not only Roddie but all those POWs who held their ground that day.

This pivotal incident stands out among others that Roddie and his comrades experienced before being liberated by George Patton’s Third Army in April 1945.  No Surrender encompasses a powerful story about human brotherhood and comradeship reckoning with—and overcoming—the evil realities of Hitler’s Nazi regime. We should all be grateful that Roddie’s wartime diaries did survive to become the basis for this very thoughtful and engaging book.