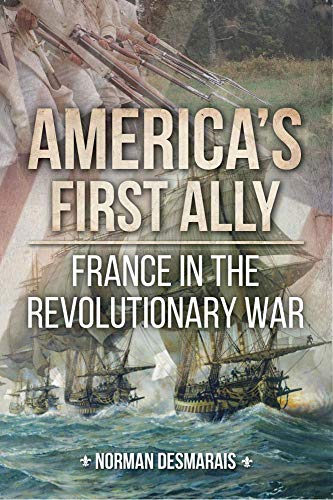 “As a reference work, Desmarais’ study succeeds in its intended purpose.”

Author Norman Desmarais has collected an enormous amount of basic information about France’s involvement in the American Revolutionary War. Throughout, by implication, he addresses the question of whether victory would have been possible for the American rebels without so much vital French assistance.

Based on the evidence presented in this volume, anyone who would argue otherwise would be considered ill-informed. It’s no secret that inestimable French support in the form of financial loans, materiel supplies, and indirect and direct military aid, along with formal recognition as a sovereign nation, provided a key margin of difference that helped secure the American colonists their independence.

This book might be fairly described as a reference work. It does not tell a story, rather provides lists upon lists of factual information. One of the chapters, titled “Naval Assistance,” runs to 113 pages. The author records, year by year, virtually every action involving French privateers and regular naval fleets. A total of 667 footnotes provided references for each of these sea going incidents—certainly a gold mine of information for any researcher seeking to learn more about the role of French-related naval activity that served the American cause of liberty.

Other chapters include a discussion of “Covert Aid,” directly related to another chapter titled “Outfitters and Suppliers.” Desmarais lists the massive amount of materiel aid in war goods made available to the Americans, along with the names of actual French suppliers, both before and after the formal alliance of 1778. In an appendix he reproduces the names of the ships and the war-related cargoes sent to the Americans from the government sponsored trading firm, Roderigue Hortalez et Cie. in 1776 and 1777.

For some reason Desmarais includes a relatively short chapter about the rebel invasion of Canada in 1775, a dramatic failure for the American cause that has little to do with actual French-sponsored support besides very passive involvement by local habitants. Quebec Province, up until 1763, had been a part of the French empire in North America. On the whole, the local habitants did next to nothing to assist the American invaders. Thus this chapter seems misplaced in a study devoted to listing the multiple ways in which France undergirded the Revolution.

In regard to military support, the author in a chapter titled “Military Aid” discusses battles in which French officers—think of Lafayette among others—played important roles. This listing features descriptions of such noteworthy battles as Brandywine, Barren Hill, Monmouth, and Stony Point, among others, but Desmarais does not include the siege of Yorktown, the most important example of successfully combined land and naval operations involving Franco-American forces during the whole war. Rarely does the author mention uncooperative diplomatic and military moments between the two allies, but he does admit to tensions in failed cases of combined operations at Newport in 1778 and Savannah in 1779.

Overall, America’s First Ally does not represent a narrative retelling of France’s involvement in the American Revolution. Rather, it serves as a detailed catalog that lists the thousands of ways that establish how significant French activity was in defeating the British enemy. As a reference work, Desmarais’ study succeeds in its intended purpose. As a readable history and interpretive summary of this very engaging story, readers will need to look elsewhere.