United States of Socialism: Who's Behind It. Why It's Evil. How to Stop It. 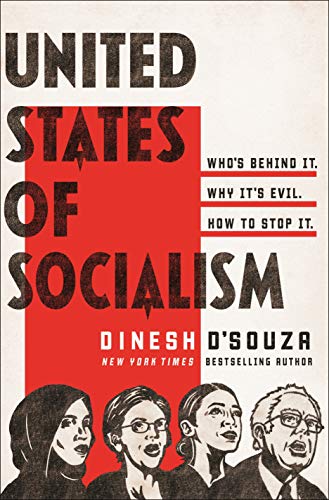 “an entertaining, thought-provoking book that will and should command a widespread readership.”

This volume represents a direct confrontation with those politicians who want to push the United States in a decidedly socialist direction. According to well-known conservative author Dinesh D’Souza, this leftward drift has taken a particularly sharp turn in recent years, as led by a small band of uber progressives now dominating the Democratic Party.

Universal health care, the Green New Deal, and heavy taxation to eradicate wealth inequalities represent the kind of legislative proposals, states D’Souza, that would transform the United States into a nation of imperious government. The result would be a tragic loss of individual liberty, initiative, and creativity in favor of stifling conformity and virtual economic poverty for almost everyone, except for a favored socialist elite whom D’Souza describes as “political entrepreneurs”—systematically satisfying their own need for power and greed for monetary riches while poverty sweeps over the land.

The author has no hesitation in naming those politicians who are currently leading the sharp leftward turn. Obvious among them are Bernie Sanders, Alexandria Ocasio-Cortez, Bill de Blasio, Ilhan Omar, and Elizabeth Warren, among such lesser lights as Beto O’Rourke and Pete Buttigieg. Their brand of socialism does not conform to the Karl Marx variety that is reliant on the uprising of the traditional working class, but rather should be labeled “identity socialism.”

The newer kind of socialist thinking, D’Souza argues, rests on identity politics as constructed around race, gender, and sexual orientation variations in the population, producing groups of victims whom socialists insist have systematically been denied mainstream prosperity. In other words, the current free enterprise system is purposely unfair and can only be fixed through the kind of major structural changes that identify socialists want implemented.

D’Souza offers a hypothetical example of a parking lot attendant apparently not sharing properly in the wealth generated by modern free market capitalists, the likes of Jeff Bezos and Bill Gates, who have become amazingly rich through their entrepreneurial activities. The cry is that they didn’t really build whatever it was that they built, which D’Souza challenges by looking at how their creative endeavors have helped to promote widespread prosperity in the United States.

D’Souza goes on to fault leftists for trying to sell the socialist model of happiness as it exists in Sweden and other Nordic countries. The problem, though, is that these nations have homogenous populations, unlike more relevant models such as the once prosperous but now poverty-stricken nation of Venezuela.

This country used identify socialism to redistribute its wealth, now concentrated in the hands a few favored Chavista-style socialists while real poverty haunts the once prosperous landscape. For D’Souza, Venezuela serves as a gigantic warning signal against proposals that can destroy general prosperity in the United States, should the identify socialists get their way in installing their alleged fairer-for-everyone legislation.

D’Souza’s hope for the future resides in the nation’s constitutional system, originally designed by the Founding Fathers to prevent both willful minorities and majorities from taking complete control for themselves of all branches and levels of government. In this context, his discussion of Federalist Number 10, written by James Madison, is definitely inciteful as to why identify socialists may, in the end, falter in their efforts to cover over the American dream with political conformism and economic privation.

No doubt Progressives, especially card carrying socialists among them, will dismiss this book as unfair and misleading. They will no doubt scoff at D’Souza’s assertions regarding the importance of Donald Trump as a president thoroughly committed to creative capitalism. On the other hand, readers whose minds appreciate the nation’s founding values will find much in this volume that is worthy of their attention and consideration. Like it or not, Dinesh D’Souza has written an entertaining, thought-provoking book that will and should command a widespread readership.