Hitler’s Death: The Case Against Conspiracy 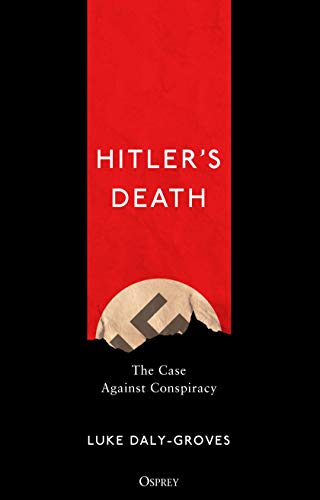 “Hitler’s Death represents a useful contribution to the neverending literature dealing in some way with the life and death of this most despicable of human beings.”

If Adolf Hitler were still alive, he would be 130 years old this year. The good news, of course, is that this crazed Nazi master butcher is long since dead. The question that dominates this new book is when, where, and under what circumstances did Hitler die. According to author Luke Day-Groves, the evidence is overwhelming that the Führer committed suicide by blowing out his brains on April 30, 1945.

With Russian soldiers overrunning Berlin, he did so while cowering underground in his Führerbunker. Staff members carried his lifeless body, along that of Eva Braun, into the courtyard above the bunker where they ignited gasoline in attempting to cremate the corpses. At most, badly charred remains were all that the Russians could gather up and haul back to Moscow for further study, apparently to prove that Hitler was assuredly dead.

The targets of his study are those conspiratorial writers who quickly sprung up to spin tales of Hitler’s last-minute escape from the bunker. Such stories soon claimed that the Führer, in the most widespread version, escaped by submarine to Argentina, or, in other curious versions, fell into the hands of the British-American allies, apparently anxious to keep the Nazi dictator away from the ever-devious Russians. Day-Groves, based on a remarkable amount of research in relevant British and American archives (the strength of this book), is able to poke huge holes in such conspiratorial theories, often written by sensationalists looking for a big payday from publishers hungry to sell such made-up drivel to conspiracy-minded audiences.

Readers might ask why all the fuss about whether Hitler killed himself in April 1945 or lived on. The author points out that the place and time of the Führer’s passing is important to understanding the final collapse of the whole Nazi regime.  Knowing for sure that the dictator was dead and gone, by suicide no less, was also significant in stifling potential neo-Nazi movements that longed for Hitler’s reappearance to bring about the full revival of the Third Reich. This kind of concern fueled official investigations into the 1950s based on claims that the beloved Führer was still out there somewhere, obviously plotting to bring more of his insane mayhem to the world.

In what might fairly be described as a text that wanders in no logical order from subject to subject, Daly-Groves provides convincing evidence that all conspiracy-minded writings must be dismissed as antithetical to the obvious reality of Hitler’s decision to kill himself as his perverted Nazi regime collapsed all around him.

What also makes sense is that the Russians did gather up the severely burned remains of Hitler and Braun, whom the Führer married the day before they each committed suicide. Hitler’s teeth have been verified as his own and exist in a Moscow archive. However, DNA tests performed in 2009 on what Russians assumed was Hitler’s skull turned out to be that of a woman. Daly-Groves suggests that many dismembered body parts were lying around in the courtyard that the Russians could have mistaken as belonging to Hitler. Then again, the skull could be that of Eva Braun, which the author, rather curiously, does not suggest.

In the end, readers must decide how to resolve these lingering mysteries for themselves. What can be said is that Daly-Groves has produced a book that seems to prove beyond any reasonable doubt that Hitler blew out his own demented brains on April 30, 1945. So ended the life of one of the greatest mass murderers of all time. Although clumsily written, Hitler’s Death represents a useful contribution to the neverending literature dealing in some way with the life and death of this most despicable of human beings.