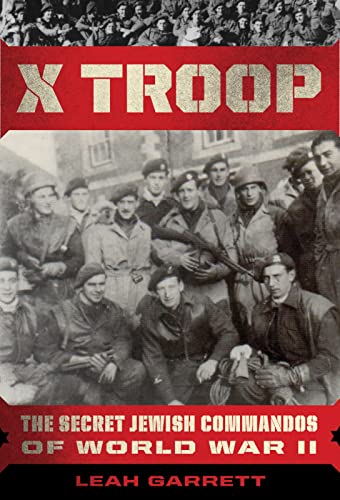 “Leah Garrett must be congratulated for pulling all these stories together by bringing praiseworthy attention to these young Jewish resisters of Nazism who became among the most noble and courageous of liberators during World War II.”

Author Leah Garrett has written an invaluable study of a group of young Jewish men who were able to escape from Germany and neighboring countries before Adolf Hitler and his Nazi cronies began their mass slaughter of Europe’s Jewish population. Her text features three individuals, Manfred Gans, Peter Masters, and Colin Anson, among a small number of such refugees who managed to reach England and, in turn, join British commando forces in fighting to defeat their Nazi enemies.

Once the war broke out in September 1939, British authorities largely classified these young men as “friendly enemy aliens” and incarcerated them in less than pleasant internment camps. Government bureaucrats even sent some of them all the way to Australia under horrible transport conditions.

For nearly 100 of them, they were able to reclaim their freedom by volunteering for special forces training and service in July 1942. Their particular commando company, which came to be called X Troop, consisted of men like Gans, Masters, and Anson whose native language was German but who would commit to learn and speak English while taking on the full combat persona of specially trained British soldiers.

Garrett found these men to be highly motivated by the idea of striking back at Hitler’s genocidal military regime. As a group, they knew that their parents, relatives, and friends were being hauled off to concentration camps where they were facing various forms of human slaughter.

What followed after their enlistment was extremely demanding training at places like the village of Aberdovey (now called Aberdyfi) in Wales. Among their duties would be gaining intelligence from captured German soldiers particularly after they engaged in extremely dangerous assignments as part of the D-Day invasion in June 1944.

Once the book turns to the subject of actual combat, Garrett presents a series of death defying stories Involving X Trooper actions both during and after the June 6 D-Day invasion. Examples include the fearless acts of Peter Masters, who was assigned to a Bicycle Troop that helped secure Sword Beach on D-Day with orders to proceed inland to reinforce glider troops who had captured Pegasus Bridge, critical to warding off German counterattacks. Fighting their way inland, the bikers reached the bridge well ahead of Brigadier Simon Fraser, Lord Lovat, and a bagpiper who supposedly led the way—and as famously but inaccurately portrayed in the classic movie, The Longest Day (1962).

Some of the X Troopers, among them Colin Anson, got into combat well before D-Day operations. He was involved in the taking of Sicily in July 1943 and suffered a serious head wound in Italy that left a hole in his skull. Remarkably, Anson, who had received word that his father had died at the Dachau concentrations camp, was determined to get back into the fighting, regardless of his fractured skull. He did so nearly a week before D-Day in a bloody action on an Adriatic island as part of a larger operation to drive German forces out of Yugoslavia. Before he left the service in 1946, Anson participated in risky denazification activities in Germany.

Perhaps the most amazing story told is that relating to Manfred Gans, who fought from Sword Beach all the way to Holland. Along the way he gained a battlefield commission, then used his lieutenant’s rank to obtain a Jeep. On May 7, 1945, as the European phase of the war was coming to an end, he and a companion named Bob took off in a daring cross country road trip all the way from Holland to the “model” Nazi concentration camp at Theresienstadt in Czechoslovakia. There he found what he hoped would be the case: his incarcerated parents. They were barely alive. Gans was able to provide for their liberation before turning the Jeep around and returning to the Netherlands.

Author Leah Garrett must be congratulated for pulling all these stories together by bringing praiseworthy attention to these young Jewish resisters of Nazism who became among the most noble and courageous of liberators during World War II. Not all of the X Troopers survived the brutal combat, but regardless of whether they lived or died, their service is no longer a secret and deserves widespread recognition, thanks to this beautifully constructed book.