The Widow Washington: The Life of Mary Washington 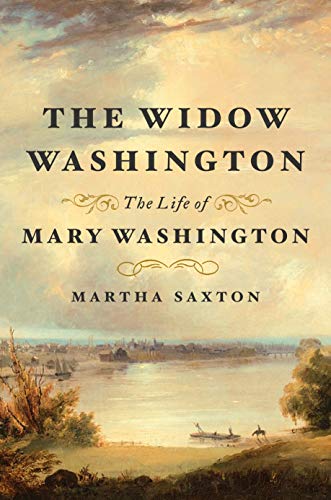 The Widow Washington represents an engaging, although not a necessarily convincing new portrait of George Washington’s mother, Mary Ball Washington. According to feminist historian Martha Saxton, well-known for her writings on Louisa May Alcott and other female subjects, Mary has been unfairly stereotyped as a cranky old pest of a complainer by any number of male historians.

In their studies of George, they apparently have suffered from “gratuitous hostility” toward Mary. They have made no effort to understand the difficult circumstances in which the mother of George Washington lived during her life—born c. 1707/1709, died 1789—especially during the years of the American Revolution.

In length, the text, at 295 pages of small print, is quite detailed, despite the limited amount of surviving primary source material that relates in some way to Mary. Her own letters are rare, indeed, and suggest very little about her actual thoughts, concerns, fears, or feelings in regard to personal happiness or anxious despondency toward life. Because of this void in actual information, Saxton had little choice except to speculate—over and over and over again—about what Mary was thinking and doing amid the harsh daily realities of growing up in early 18th century Virginia.

Abundant evidence, mostly drawn from solid secondary studies, suggests that life in the Old Dominion during Mary’s early years was often brutal and short, with disease and early death commonplace across the landscape.

For example, Mary lost her father within two or three years of her birth, and her own husband, Augustine Washington, died unexpectedly after he and Mary had been married for only 12 years. Unlike most young widows, she did not remarry, even though she was in her early to mid-thirties, but devoted herself to raising her five children who survived into adulthood and managing family properties, including Ferry Farm overlooking the Rappahannock River across from Fredericksburg, Virginia.

Saxton can’t quite make up her mind whether she admires or just feels sorry for Mary, living as she did in an era when slavery dominated as an accepted labor system in Virginia—and one might add, virtually everywhere else on planet Earth. The author does mention the names of a number of enslaved persons owned by the Washington clan, in remarking more than once that Mary was mostly indifferent to the inherent brutality of holding other human beings in bondage.

The real culprit in this story, however, is George Washington, Mary’s eldest son, defended by biographers who “have accepted without question his annoyance with his mother over money.”

The reality, according to Saxton, was that Mary’s requests were not “self-serving and groundless pleas of an aging, selfish woman.” The author has to admit that George was dutiful in providing for his mother when she pled for more financial support. What actually irked him was the widespread rumor that he was not properly taking care of Mary’s needs, which meant, as a result, that she was wasting away in poverty while he was among the richest planters in Virginia.

Readers should evaluate the evidence and Saxton’s interpretations for themselves in regard to the question of how financially bereft Mary actually was during her nearly 80 years of existence. According to her will, she was not living anywhere close to marginal circumstances at the time of her passing.

The author bounces around in presenting her findings, with topics often abruptly changing from paragraph to paragraph. Moreover, the text is full of speculation as to what Mary was doing and thinking at any given moment.

For instance, when Mary passed away, succumbing to breast cancer in August 1789, George, who four months earlier had become the first president of the United States, did not seem sensitive enough to his mother’s passing. In sending his condolences to his sister Elizabeth, who was a constant companion of their mother, Saxton claims that he was both “pompous and patriarchal” in his message. The focal point of his letter is that she had lived a meaningful life and was at peace according to the “’decrees of the Creator’.” He also declared to Betty that he had invariably been generous in supporting his mother, financially and otherwise. What was pompous and patriarchal about this letter, when read in the context of the times, is not very clear. From Saxton’s point of view, George was apparently being insensitive to this sister’s grief by repeating his “familiar defensive litany” about properly supporting his mother.

Saxton concludes by discussing two 19th century biographies about Mary, both written by post-Civil War southern women. Each tried to turn George Washington’s mother into an advocate of the Lost Cause. They could only do so, states Saxton, because “the scarcity of established facts about Mary’s life made her eminently useful for their. . . purposes.”

The Widow Washington poses the same problem about correctly understanding Mary’s life, in this case captured by Martha Saxton in a modern-day feminist interpretation. As such, readers may question whether Mary was nothing more than a victim of an insensitive patriarchal social order or an irritable woman full of agency who deeply loved her famous son but felt starved for more attention from him. The proper answer is still waiting to be determined.

James Kirby Martin is the Hugh Roy and Lillie Cranz Cullen University Professor of History, Emeritus at the University of Houston. He is an award-winning author and editor of 13 books and numerous scholarly articles.