Revolutions: How They Changed History and What They Mean Today 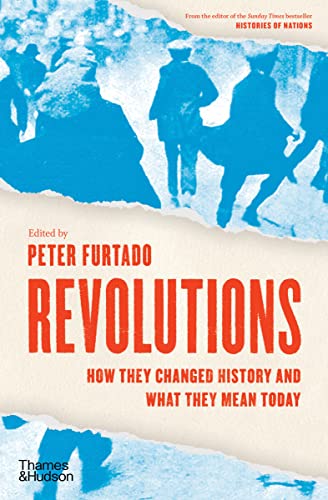 “Revolutions should attract a broad readership curious about the ways in which human upheavals have, at least in some instances, affected and even altered the course of world history.”

Revolutions contains 24 discrete essays, each written by a qualified historian expert, a few of whom live in the country about which he or she writes. Editor Peter Furtado tasked the authors to satisfy two principal objectives. Each was to describe the local circumstances that resulted in revolution and then evaluate the short- and long-term consequences of that nation’s continuing understanding of itself.

The selection of which revolutions to include, among so many possibilities, favors recent events. The first six essays, beginning with the English Revolution, 1642–1789, and covering more prominently the American and French Revolutions, should be described as pre-Marxist in content. The remaining 18 essays focus on upheavals that took place between the years 1908 and 2011. They range in subject matter from the Young Turk Revolution of 1908 to the Chinese, Cuban, and Iranian revolutions, concluding with the Arab Spring turmoil of 2011 in Egypt. Considerations of Marxist ideology, whether accepted, modified, or rejected, are definitely a focus of the commentary in most of these essays.

Not surprisingly, the essays vary in clarity and quality. Among the very best in fulfilling the editor’s two mandates are the French Revolution by Sophie Wahnich, the Russian Revolution by Dina Khapaeva, the Chinese Revolution by Mobo Gao, the Khmer Rouge Revolution in Cambodia by Sorpong Peou, and the End of Apartheid Revolution in South Africa by Thula Simpson. Some others lean toward the preachy in terms of suggested revolutionary consequences or in subtly assuming that socialism has the inherent capacity to produce greater equality in political regimes than those predicated on capitalism.

A theme that becomes obvious, even though not discussed, is how bloodthirsty, if not horribly inhumane, some of these revolutions turned out to be. Rare were the ones that showed a modicum of restraint in attempting to topple what were perceived as oppressive, liberty stifling regimes. The three worst in terms of percentage destruction in human lives were the Russian, Chinese, and Khmer Rouge revolutions.

These three, in particular, seemed to be “motivated by a belief that the socialist end justifies the means,” as stated by Sorpong Peou. As he points out, about two million Cambodians (25 percent of the population) died in “mass atrocities” committed by Pol Pot and his minions as they “aimed to build a totalitarian atheist state by destroying all those . . . suspected of posing a threat to the top leadership’s radical agenda.” By comparison, the Soviet regime of Lenin/Stalin exterminated as many as 20 million people, while Mao Zedong’s communists caused the deaths of as many as 65 million humans (about 10 percent of the population) during the years of the “Great Leap Forward” and “Cultural Revolution.”

More concerned about defining the word “revolution” than offering a comparative analysis of what the essayists have found, editor Peter Furtado missed an opportunity to assess the broader implications of these discrete essays. For example, why did some revolutions turn out to be bloodier and less liberating in terms of human rights? Why were others less violent and more committed to expanding human liberties? What do these possible patterns suggest about the inherent nature of revolutions—and why?

And what about the human factor, specifically leadership? Each essay features a brief biography of two relevant leaders. What about the matter of power? What actually motivated these revolutionaries? So many acted as if they were truly committed to improving the lives of ordinary people, but were they not just manipulating some form of rhetoric, such as Marxist ideology, to gain power for themselves with no improvement in the lives of the masses they were supposedly devoted to liberating?

As a group, the essays make for interesting reading, even if this volume lacks

broader conclusions relating to the range and meaning of its subject matter. Despite this limitation, Revolutions should attract a broad readership curious about the ways in which human upheavals have, at least in some instances, affected and even altered the course of world history.