To Begin the World Over Again: How the American Revolution Devastated the Globe 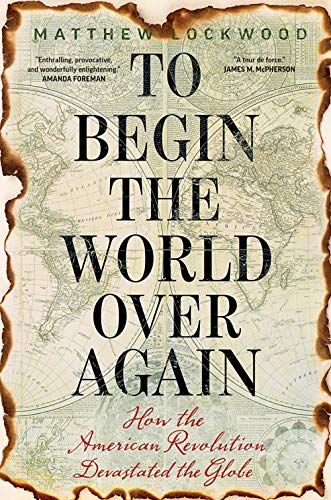 The main title of this massive tome comes from Thomas Paine’s Common Sense. The controversial subtitle is an invention of the author, who is determined to prove that mostly bad, rather than positive world developments, grew out of the American Revolution.

His chapters wander the globe from Peru to India, to Ireland, to Africa, to China, to Australia, and even beyond. They feature a cast of known and little-known persons ranging from the Peruvian rebel Micaela Bastridas; the expansionist Tipu Sultan of Mysore, India; the traditionalist Qianlong Emperor of China; the autocratic Catherine the Great of Russia; and the future British naval hero Horatio Nelson. These biographical portraits can be vivid or confusing, depending on what the author wants the reader to learn from his twisting and turning storylines.

Predominantly, the author’s chapters cover people and subjects that occurred while the American Revolution was actually taking place, say from the 1760s into the 1790s. For example, Micaela Bastridas and her husband led a massive uprising against oppressive Spanish authority in Peru. Bastridas was mercilessly executed in 1781 as the rebellion collapsed. How any of this tragic story relates to the so-called devastating effects of the American Revolution, which was occurring at virtually the same time, remains murky at best.

Lockwood admits that the successful overthrow of British authority by North American rebels, confirmed in 1783 by the Peace of Paris, gave hope to Central and South Americans that imperial Spain could be overthrown, finally fulfilled in the early 19th century by such heroic rebels as Simón Bolívar and others. Thus It remains unclear how the effects of the American Revolution were devastating rather than encouraging to the liberating rebels seeking to get rid of the autocratic Spanish Empire in the Americas.

In another example among many possibilities, the author proclaims that “tea, and the free trade it represented,” was the key factor causing the colonists’ “violent split from the British Empire.” Apparently, other causal factors, such as the well-documented ideological concern about not bowing to perceived political tyranny, as presented by many other studies, was of no consequence, not even worth mentioning.

The author’s materialist assertion of rebel motivation leads into a discussion of the China trade that got underway with one American sponsored voyage to the Celestial Kingdom in 1784. Eventually, moving into the 19th century, American trading merchants learned that huge profits could be secured by becoming active in the opium trade. Their commercial actions apparently supported the British Empire’s insatiable imperial expansionism across the globe. This lone 1784 voyage, the author claims, served as the seed from which the devastation of 19th century China occurred, allegedly the fault of his preferred materialist interpretation of historical reality.

The book’s bottom line is that wherever one looks across the globe, some form of devastation followed in the wake of the American Revolution. Part of the problem supposedly lay with the timing of the colonists’ uprising. The British, once cut off from unloading their felons and vagrants (an estimated 20,000 over several decades) on the North American provinces, rather quickly established a very fertile dumping ground in Australia, the colony of New South Wales.

Accordingly, if only the Revolution had not occurred when it did, those 150,000 persons eventually shipped off from the British Isles to Australia would not have overrun and devastated the aboriginal population already living there. By the author’s logic, the Revolution was the culprit for so much suffering among Australia’s native peoples.

Readers will need to keep factors of basic logic in mind should they choose to pore through these pages. Considering the fallacy of post hoc, ergo propter hoc, did all these global developments happen just because the American Revolution took place?  Does the author actually present evidence that proves rather than just asserts direct connections? And what about causal explanations that reach beyond the mechanistic, blame game determinism that pervades in this study?

Is it possible that the Revolution resulted in any positive outcomes for the world? Thomas Paine thought so when composing Common Sense. He viewed the autocratic old world as overrun by corruption, and he hoped the Revolution would serve as a model of liberation for peoples everywhere. That the author decided to ignore this broadened likelihood, to stand alongside his negative presentation, marks To Begin the World Over Again as a book much narrower in scope, vision, content, and interpretive value than it could have been.