The Moment Before Drowning 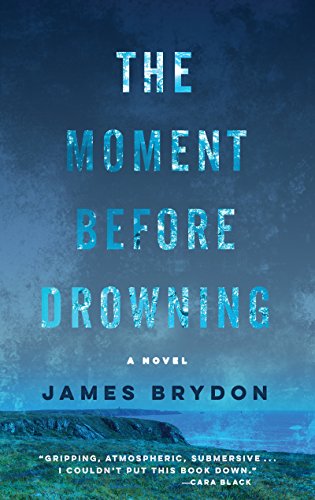 “The Moment Before Drowning is a highly lyrical novel.”

Winter in Brittany can be haunting. The winter of 1959 was especially haunting for Jacques le Garrec, a man recently returned to his native Breton village with a lifetime’s worth of ghosts. Once upon a time, le Garrec was a national hero—a member of the Resistance that fought against German occupation during World War II. However, after the war ended, le Garrec joined the police in Paris, then was attached to the service de renseignement in Algeria. There, le Garrec witnessed unimaginable horrors at Al-Mazra’a (The Farm), a veritable torture chamber run by the French military. The images of blackened Algerian corpses with bruised flesh never leave le Garrec alone in this slim volume.

The Moment Before Drowning takes place over the course of nine days. On the first day, le Garrec returns to his home town from Algiers. It is not a happy homecoming, for le Garrec is suspected of murdering an Algerian woman who was under his supervision.

Things get worse for the former war hero when his friend, the philosophy teacher Erwann Olivier, more or less hires him to investigate the mutilation and murder of local girl Anne-Lise. Erwann believes that the boorish local investigator, Captaine Lafourgue, did a terrible job in handling the now cold case. Unbeknown to le Garrec, his unofficial examination of the life and death of Anne-Lise leads him to uncover an older rape and murder involving another teenage girl.

The Moment Before Drowning has many colorful characters, but most are mere stereotypes.

Christian de la Halliere is two-dimensional “fascist” who fought with the Wehrmacht on the Eastern Front, and when le Garrec questions him about Anne-Lise at his decrepit chateau, de la Halliere loses himself in a barrage of elitist, reactionary, and Nietzschean tropes.

On the other end of the political spectrum is the Russian immigrant Aleksandr (Sasha) Kuramakin, Anne-Lise’s former lover and a Communist who calls le Garrec a “fascist” for joining the French police. Even Lafourgue is a bit black-and-white; he is the typical violent-minded police officer who believes in terrorizing the citizens (especially if they are Communists).

The mystery at the heart of The Moment Before Drowning is underwhelming. The murder and mutilation of Anne-Lise may or may not be solved by the end of this book, but, for the most part, le Garrec fails to bring any kind of closure to the people of his small hometown.

The vast majority of this book is made up of le Garrec’s flashbacks to Algeria, especially the torture chamber run by the sadistic Lambert. As such, The Moment Before Drowning is one extended political commentary about French colonial policies in Algeria and the nature of the French war against Algerian nationalists during the 1950s and 1960s.

Le Garrec is supposed to be the human and humane heart of this novel, but he often comes across as ineffectual, weak, and consumed by a hero-martyr complex. Basically, le Garrec is the type of guy who thinks that giving a ride to an abused Arab housekeeper will make up for what he witnessed in Algeria.

The Moment Before Drowning is a highly lyrical novel. Brydon’s prose is exquisite, and he certainly knows how to set a scene. The problem with this book is that it is preachy, intentionally cerebral, and its plot goes nowhere. The pleasure of reading this book is also constantly undercut by the many (and repetitive) flashback scenes set in Al-Mazra’a. It could be argued that The Moment Before Drowning might have been better off as a short story or novella, not a full-length novel.