Rin Tin Tin: The Life of the Legend 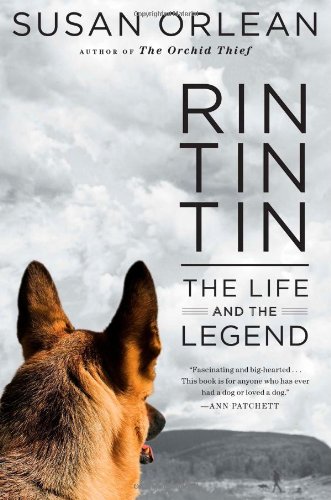 “Throughout Rin Tin Tin: The Life of the Legend Susan Orlean presents a story that is as engrossing as it is illuminating, which is, of course, her special magic. This is one hell of a book, one that the reader rushes into headlong . . .”

By this point in our cultural and literary history, any new book by Susan Orlean may be considered something of a treat, as well as a major event in publishing, what with the Meryl Streep-ified success of The Orchid Thief and all. This, added to the fact of what nimble, joyful treasures her past books and New Yorker articles have always proven themselves to be.

And like being honored to receive an invitation to dine at the chef’s table, it is best in these circumstances not to attempt to choose the beef over the veal, the chicken over the fish, but to eat what is put before you, knowing that whatever emerges from that oven will be marvelously cooked and properly sauced before it finds its way to the table.

In the same way, it has always part of the fun when it comes to Susan Orlean and her work—first the guessing game of “What will it be?” followed by the surprise of discovering what topic has caught her eye, captured her fancy this time around.

And this time around, Ms. Orlean is focused, enthralled actually, by the unlikely subject of Rin Tin Tin, that German Shepard with those soulful brown eyes, those staunch shoulders, that chesty growl—all coupled with an award-winning leap that could send him sailing 12 feet into the air, cameras rolling.

Here, Susan Orlean explores the reasons why she chose the topic she did:

“I found myself thinking about why I had been drawn to this story, at this moment, when I could have chosen any story to pursue. I knew that I loved the narrative of Rin Tin Tin because it contained so many stories within it: it was a tale of lost families and of identity, and also of the way we live with animals; it was a story of luck, both good and bad, and the half turns that life takes all the time. It was a story of war as well as a story of amusement. It was an account of how we create heroes and what we want from them. It laid out, through the story of Rin Tin Tin, the whole range of devotion—to ideas and to a companion—as well as the pure, half-magical devotion an animal can have to a person.”

Rather rapturously, she concludes:

“I began to understand that what drew me to Rin Tin Tin most of all was his permanence—how he managed to linger in the minds of so many people for so long, when so much else shines for a moment only and then fades away. He was something you could dream about. He could leap twelve feet, and could leap through time.”

Add to that the fact that, if the reader can combine the various dogs who, onscreen, were Rin-Tin-Tin (“Rin-Tin-Tin” being the preferred television spelling, “Rin-tin-tin” being the spelling that owner Lee Duncan himself preferred, and “Rin Tin Tin” being the spelling that Susan Orlean settled upon, which more or less standardizes it now as the correct one), merge several performers into one character, it is perhaps the ultimate Hollywood story. One that, in a human incarnation, would have suggested the likes of Judy Garland or Mickey Rooney, with high highs, low lows, reinvention and the triumph—and failure—that it brings.

The story of Rin Tin Tin begins dramatically, in the battlefields of France during World War I. A young farm boy from California named Lee Duncan went off to war with a dream of becoming a flying ace and of leaving his old life, part of which had been spent in an orphanage, behind.

Instead, on September 15, 1918, he walked into a bombed-out kennel and discovered the meaning of his life:

“He stooped down and looked inside the building. When his eyes adjusted to the dark, he saw a hellish image of slaughter: twenty or more dogs, killed by artillery shells. He stepped into the kennel and made his way among the bodies. They were clearly army dogs; one had a messenger-pigeon cage strapped to his back, and two of the pigeons were alive. Lee released the pigeons. In the stillness, he heard whimpering. He followed the sound to the back of the kennel. There, in the farthest corner of this shattered, deathly place, was a frantic German shepherd female and a litter of five puppies.”

In a war in which dogs, as work animals, were as much a part of combat as humans, Duncan’s discovery was of great value. He managed to free the dogs and to get them back to his base, where they were given over the various combat tasks, with Duncan withholding only two, a female that he named Nanette and the male he named Rin Tin Tin.

This story survived, of course, in part because of the legend behind the animal. The dog stayed by Duncan’s side throughout the war (dogs were used for many varied purposes then, from “Mercy” dogs who walked out onto the battlefields with packs of medical supplies to be used by any wounded soldiers who were able, to cigarette dogs, terriers who carried packs of cigarettes through the trenches in order to help the soldiers combat stress) and was allowed to return to California with him at war’s end.

—becomes a star in silent pictures, by defying gravity onscreen and overcoming evil with his bare paws (as Susan Orlean puts it: “He gnaws through wooden doors, unties knots, climbs trees, vaults over huge chasms, saves someone from drowning by dropping a lifeline to him, feeds a lamb with a baby bottle, lights a wick and rekindles the light in a lighthouse,” etc.)

—struggles to make the transition from silent pictures to talkies in the same manner as John Gilbert (as one studio memo put it, “the making of animal pictures, such as we have in the past with Rin Tin Tin, is not in keeping with the policy that has been adopted by us for talking pictures, very obviously, of course, because dogs can’t talk.”), only to battle his way back and become one of the world’s best known film stars.

—becomes a hit on the vaudeville stage, earning $1,000 a week for public performances at a time in which human performers would have been pleased with a tenth that much. (So superb was Rin Tin Tin in live performances that reviewers’ dubbed him, “the Barrymore of dogdom.”)

—suddenly dies in the summer of 1932, only to be replaced by the woefully inferior Junior, the male pick of his litters, who, with his boxy head and pleasant manner would only manage to turn out a couple of movies to this father’s dozens.

From here, the legend of Rin Tin Tin conspires with us to allow us to be less caught up with the facts than with the image of that glorious dog, standing on a bolder at the back of the screen, watching over us.

And so we ignore that, as Jack Warner, the head of Warner Brothers and producer of the Rin Tin Tin films insisted, there were up to 18 different Rin Tin Tins and that the studio used them all. (Duncan insisted that there were, over time only two that worked in film and a third, Rin Tin Tin III, the grandson of the original, who worked in television.)

And that animal movies so fell out of favor that, despite the fact that Rin Tin Tin was the most famous movie star on Earth, polling in at 94% name recognition—something that no human actor could approach—Rin Tin Tin went for so long without working that Duncan and his family ultimately had to live off his wife’s salary as a secretary until something happened.

That “something” involved a Hollywood shark of the old school named Bert Leonard and the burgeoning medium called television. And from here the number of hands who reach out and grab hold of the legend of Rin Tin Tin become as many and varied (some connected by bloodline, others not) as the dogs who may or may not have played him.

Throughout Rin Tin Tin: The Life of the Legend Susan Orlean presents a story that is as engrossing as it is illuminating, which is, of course, her special magic. This is one hell of a book, one that the reader rushes into headlong, haunted by the eyes of the beast whose picture adorns the first page of a chapter entitled “The Silver Screen,” only to slam on the breaks hard, when it becomes apparent that this wonderful read will end all too soon.

From first to last, the story is Rinty’s (as he was called on movie sets) own, with that doggiest of dogs alive on every page, as Susan Orlean herself joins the strange comrades, many of whom have been in and out of court for years, fighting over the rights to an animal who has been dead for nearly 80 years, who have dedicated years of their lives to insure that the legend lives on.

“He stirred something in people. ‘The thing he possesses is the thing which few actors or actresses possess and that no dog on stage or screen today possesses, the power to realistically portray feeling or emotion,’ one fan wrote to Lee, adding, ‘Yes, he is a human dog, for . . . has he not shown that he was human—human in the big sense of the word? Truly, Rin Tin Tin is without an equal. I have seen a number of dog pictures on the screen. They have been true dogs and good ones, but in none . . . have I been able to feel that the only difference between man and beast is perhaps the way we walk.’”