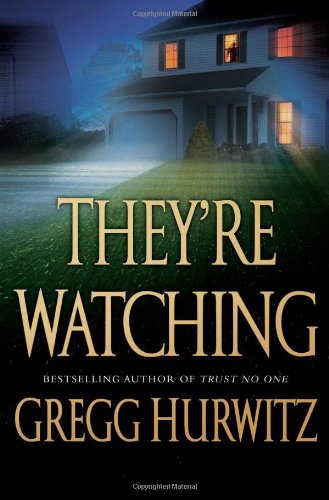 This fine author had a hit last year with his novel, Trust No One. The question is: Did he follow that effort with another that’s just as good or better? This reviewer’s answer: a resounding, yes. They’re Watching is a well-written, suspenseful thriller that keeps the reader wrapped tight, bracing for the next twist to occur. Just when a piece of the puzzle appears, Hurwitz snatches it away, leaving the reader wondering which piece he will dangle next.

Hurwitz’s writing style—first person point of view—works well, as we get inside the head of his protagonist, Patrick Davis, following him through every high and low as he journeys down a path that leads to an almost impossible conclusion. Hurwitz writes the way this reviewer likes to read—tight, with just enough description and without overdoing characters and locations, allowing the reader to fill in some of the pieces, not have everything handed out on a silver platter.

Patrick Davis is a not so happily married writer who pens a screenplay that finds its way to the desk of an agent who thinks it has legs—turns out it does. He eventually finds himself on the set of the movie, but unfortunately, gets sideways with the movie’s lead actor. In short order, Davis finds himself banished from the movie and sued by the leading man; Patrick’s once rising star begins to plummet to earth. He doesn’t have much time to feel sorry for himself, as several surveillance DVDs begin to mysteriously arrive at his house, videos that indicate someone is watching his every move—everywhere. Soon after the DVDs appear, so do a number of suspicious, yet intriguing emails, directing him to perform certain tasks—with the caveat that if he fails to complete them, someone’s life may be at stake.

The book is replete with plot twists and heart-stopping action, enough to cause a reader to try to finish the book in one sitting. Don’t; it will wear you out. Davis and his wife, the book’s main characters, find themselves in so many conundrums that you can almost feel their exasperation and desperation. As the story moves on, this married couple’s relationship morphs into the antithesis of what it once was, thanks to good character development and insight into the dynamics of a near-failed marriage.

It’s obvious the author has a screenwriter’s background, as he takes us inside the world of film, actors, and agents, some of whom walk a fine line between legal and questionable behavior. That subculture added realism to the plot, something not normally possible without an insider’s knowledge.

One thing that grabbed this former law enforcement officer’s attention was the mention of a Vehicle Identification Number, or VIN. The author describes a car that had no identifying data, “even the skinny Vehicle Identification Number had been unscrewed from the dash.” The reality is that the VIN is on the driver’s side door, dashboard, engine parts, and depending on the manufacturer, in other places throughout the vehicle. That one thing slowed me for a moment, but once the suspense picked up again, I quickly let it pass. Hurwitz’s descriptions of surveillance hardware, weapons, and police procedure were spot on.

It is a difficult task to be able to constantly ramp up the action and intrigue. Hurwitz seemingly had no problem doing it. His story is like a train coming down the track, the noise becoming louder and louder, until the engine finally reaches the station and completely drowns out everything around it. They’re Watching is a thrilling novel, dripping with mystery, suspense, violence, and even a little romance. It contains all the ingredients for a bestseller.