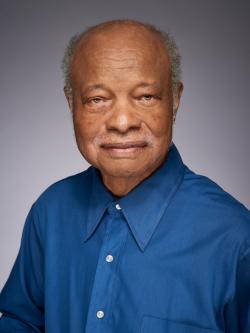 Laverne Frith is the founder and proprietor of Frith Press and founder and co-editor for more than 20 years of Ekphrasis, the premier journal of ekphrastic verse. He was co-author of reviews of literary magazines for Literary Magazine Review. Widely published in literary journals, Mr. Frith is the winner of many poetry prizes and awards.

He was also, for 18 years, the poetry columnist for the monthly Living in the West magazine.

Things as It Is

A Memory of the Future: Poems

Storm for the Living and the Dead: Uncollected and Unpublished Poems

“Never mind that his art is almost always sexually themed, frequently violent, and often flawed. It is nonetheless art.”

“Sealey’s passions radiate and radiate through these poems.”

“These poems breathe an uneasy luminescence into the language of poetry.”

Scribbled in the Dark: Poems

Winner of the Pulitzer Prize, the Wallace Stevens Award, and many other honors, Charles Simic was chosen poet laureate of the United States in 2007.

“These poems represent Jorie Graham at her unfettered best.”

“This stunning final collection is one more reminder that Philip Levine is irreplaceable.”

“poems of longing, of grieving and wanting, poems of a recovered past and its once lost values. . . . an abundant volume to read.”

The Laughter of the Sphinx

“his work is fresh but finished, intuitive as well as sophisticated, hallmarks of a mature poetic sensibility.”

“This is a volume rich with the wisdom of one of our finest poets, a book laced with darkness and saturated with light.”

XX: Poems for the Twentieth Century

“McGrath’s book is filled with quixotic twists and turns within the framework of the 20th century . . .”

Emblems of the Passing World: Poems after Photographs by August Sander

Ekphrastic poetry utilizes the medium of verse to address, to interpret, and to transliterate another art form.

“Each of these moving poems is a metaphor of mutuality and mutability, of vulnerability and union.”

The Pawnbroker’s Daughter: A Memoir

Alone and Not Alone

Ron Padgett is a writer with a consummate sense of the fantastical as it intersects the quotidian.

“From the New World is an indispensable addition to any literary library, a tour de force selection of Jorie Graham’s critically important poems to date.”

“This collection is rich in a multitude of examples of inter-connectedness with the world, identification with paintings, a variety of journeys culminating in revelation and aesthetic trans

Light within the Shade; Eight Hundred Years of Hungarian Poetry

“This volume is a courageous contribution to a world view of poetry and to poetic possibility.”

“Open the metaphorical doors and windows to this fine collection; let the textures and textures that are so generously infused into these poems find a place in your imagination.”

“The Traveling Queen is a wildly rich and passionately far-reaching collection of poems . . .”

“. . . revelatory, a testament to Di Donato’s ability to deconstruct the complex weavings and machinations of the human heart.”

“. . . destined for a well-deserved place in American letters.”

Vale Ave has been released by New Directions Press as Poetry Pamphlet #7 in their pamphlet series, which represents a significant reprinting of this outstanding long poem by the legendary

“Fear and desire, silence and passion, beauty and death . . .”

“. . . breezily contemporary in feel, yet deeply lyrical in quality and effect.”

“Mr. Bidart is the friend of narrative, and narrative is his ally.”

“. . . an important contribution to Spanish-language poetry . . . a passionate joy to read.”

The Oldest Word for Dawn: New and Selected Poems

“. . . a complex and challenging journey, created through careful design to inveigle, involve and capture imaginations.”