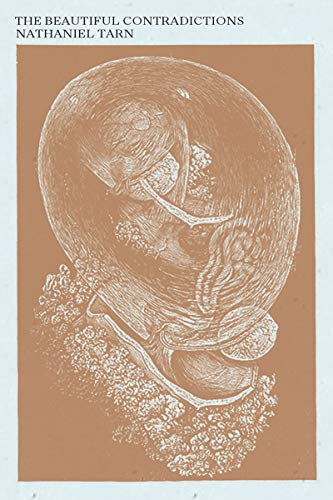 Described by Mr. Tarn as a “poem of the very late sixties—written from an old-world shore . . . ,” The Beautiful Contradictions is divided into 15 sections with detailed notes at the end of the piece.

Mr. Tarn describes the poem as a “quest for reality . . .” that “starts from primitive innocence (the flower) . . .” and “continues through every shade of complexity to the exhaustion of human capacities (the fruit).”

Given Mr. Tarn’s quest theme, it should come as no surprise that a good deal of cross-cultural material is included in the poem, from allusions to the pre-Columbian god, Mam, to the Cholula (Mexico) pyramids, and from Oedipus to the Buddha to Christ.

Mr. Tarn’s erudition is enviable as is his skilled handling of the lyrical line. But it is his ecstatically profane approach to the sacred that is truly impressive in this work.

This is no “quick-read,” one that you can move quickly back to the shelf, soon to be forgotten. It is rather a work of profound design, one born to be explored and contemplated time and time again within the dynamic of changing time, place, and circumstance.

“I shall have to pass through every birth,” writes Mr. Tarn in Section One, “every occasion of birth.”

For Mr. Tarn, human truth is an inseparable union of physicality and spirituality, the sexual wisdom of the body uniting with and being penetrated by the psychological gifts of the shaman and the scientist, the poet and the priest.

In Section Two of the poem, young people couple in caves, then “. . . macerate into old Mam once more to crucify the year/.”

Mam is a dying and rising god whose worship has been combined with Easter celebrations in some Middle American cultures.

In Section Three, Mr. Tarn addresses women and the role of women. “. . . I eye you with my mothers to whom I am making love/while the wild seeds tumble again together in your bellies/.” Mr. Tarn focuses a sense of passionate attachment on mothers and on matrilineal lines of descent.

In Section Four, which deals in part with the Oedipal myth, the poet once again writes of the mother, “the diamonds glisten on her singing throat/she gives its birth to everything there is/.”

In Section Ten, dedicated to the city of Prague and invoking the Madonna, Mr. Tarn continues the theme, “and how I yearn for you in my bowels mother of Zion bride of need/.”

“Madonna of Strasbourg,” he continues in the same section, “your ovaries are centuries old/your blood is dragon blood . . .”

Themes of blood and passion and the dying and rising of mankind’s gods appear over and over in this poem as Mr. Tarn explores the intersections of the sacred and the mortal in societies around the world.

There is, however, an element of profound sadness in the closing sections of the poem. In Section 14, Mr. Tarn writes, “. . . the age of song is dead//song is laid cold like dick robin in his grave/.”

His concerns are for the conservation of nature as well as the needs of the human race, concerns mirrored in many of the religious traditions from which he draws his urgent inspiration.

In Section 15, the final section of the poem, a new figure is introduced, a woman in a painting by Seurat: “There is a lady in blue with red hair going through a garden in Seurat/. . . she goes to meet her lover with our souls in her skirts/I think she may be the bride of God going back to her husband/.”

The lady is dressed in blue, the color traditionally associated with the Madonna, the color symbolizing purity. Her hair is red, however, and red hair is associated with Mary Magdalene, the Christian saint apocryphally believed to have been a woman of uncertain virtue prior to her conversion.

Here then is the final woman figure in this poem of quest, the figure of purity and passion, the mother, the virgin, the lover, the goddess who has occupied the pages of this poem from the beginning, the sacred and profane woman, who, having taken our souls up into her skirts, is going now to meet her husband, our father, her lover, the dying and rising god—all The Beautiful Contradictions.