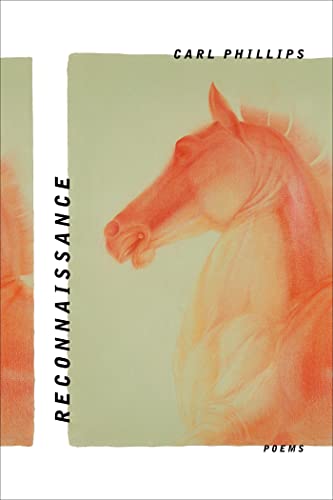 “Each of these moving poems is a metaphor of mutuality and mutability, of vulnerability and union.”

Don’t rush into this slim volume unawares—take the time necessary to live with the template that Carl Phillips so carefully outlines in Reconnaissance. These poems of passion are well worth the effort. Phillips supplies just enough guideposts to convert what may at first appear to be an unfamiliar landscape into a landscape that is not so unfamiliar after all, thereby making humanity all that much more inclusive.

He calls special attention to the frank and outright longings that, while they may betray the conventional, so often define and order the course of relationships, longings that surrender at times to the trauma of all-out loss with all of its attending implications.

This is how Phillips, Harvard-trained classicist and one of our most celebrated contemporary poets, will enthrall and entrap you. Even though you think you know enough to avoid the obvious and conventional emotional pitfalls, the poems in this collection will move you toward a fuller knowledge of something so quintessentially human—so necessary for a process of ultimately accepting loss—that you will feel you have discovered it for yourself.

It is insufficient to say of a Carl Phillips revelation that we have been there already, that we are aware of the points he is making. These well-considered poems are more like chartings, if you will, of the poet’s journey, the volume a thinly disguised retrospective suitably adorned with the trappings of relationships lived, experienced, hoped for, but in the end fraught with the kinds of incompleteness we must all come to know.

For after all, it is inside such relationships that the real giving, the real meeting, takes place—and takes its toll. In the end, we are left with vignettes or other forms of comfort. We are left with an uncertain knowing, with the separation between the wished for and the realized.

Consider the naked revelations in the poem, “The Darker Powers,” where Phillips writes of the body as being “. . . addicted to mastering—/to the dream of mastering—.”

Visit these poems in their individuality, in their phasings of encounter, as in the poem, “Moralia,” in which Phillips envisions “. . . all the bodies you’ve variously given/sway to/or made sway—rise as one before you . . .”

These riveting homoerotic love poems filled with individual and mutual tremblings—submission alternating with power—seem to address an ontology, an ultimate prayer.

Long and intense relationships require engagement, trust, and perhaps relinquishment of power, with the expectation that the rewards will be forthcoming. Phillips truly understands—and chronicles—the disappointments, the frustrations (sometimes major), that occur along the way in relationships. He acknowledges that there will be angst, regret.

Given the emotional and physical intensity in these poems, it comes as no surprise that there is occasional unevenness in some of the pieces, a tumbling sense of heightened rush and incompleteness that could, in all fairness, be construed as indicative of the subject matter itself.

That said, the uniqueness of Phillips lies in his honesty, his opening up, his surrender to scrutiny—his ultimate willingness to engage with the larger world, his poetic anchoring.

Phillips teaches us that the “tremblings” are the lighter portion of love. What matters most is what we inculcate through shared experiences, through learning, through transformations.

That kind of knowing is scattered throughout the pages of this volume of poetry—certainly not unlike the material Phillips has brought forward in previous volumes—but perhaps never more cogently, more urgently, than in Reconnaissance.

True human relationships are born of collective experience rather than found situations or circumstance—experience fraught with all the risks and range of possibilities that come from meeting, from interaction.

In reading this volume, be prepared for surprise, for engagement, for intimacies openly shared; expect the unveiling of raw experience coupled with plaintive longings, the pangs of ultimate giving, the repeated reach for connectivity, for love.

In the poem, “Last Night,” for example, Phillips explores the ultimate reach at the end of relationships: “a trembling inside the both of us,/there’s a trembling, inside us both./”

This kind of passion, this kind of loss is not unexpected given the depth of engagement Phillips alludes to, the desire and resolution of desire that he in fact lives through in the pages of Reconnaissance.

Each of these moving poems is a metaphor of mutuality and mutability, of vulnerability and union. Together, they constitute an unflinching testament to love and sexuality, to encounter and loss, to the joys and sorrows of human oneness.