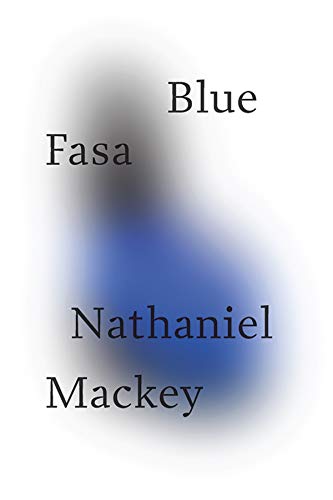 Nathaniel Mackey is a distinguished American writer. His extensive output of poetry, fiction, and criticism has garnered many awards including the National Book Award, the Ruth Lilly Poetry Prize from the Poetry Foundation, the Stephen Henderson Award from the African-American Literature and Culture Society, and the 2015 Bollingen Prize for Poetry.

Blue Fasa, though it stands alone as a self-contained whole, is in reality the current instalment in a sweepingly experimental work of metaphysical poetry. Prior volumes in the series include Splay Anthem and Nod House, among others.

In his “Preface,” Mackey explains that Blue Fasa continues the interweaving of two serial poems, “Song of the Andoumboulou” and “Mu.” The title of the book, Blue Fasa, references both an ancient Ghanaian griot epic of the Fasa clan and trumpeter Kenny Dorham’s bop classic, “Blue Bossa.”

The poems are populated by a group of itinerant travelers moving not only through time and geography, but through metaphysics and mythology as well. Mostly, however, the characters move through music—the music of the griot epic, the music of the Brazilian bossa nova—the lyre’s string of these poems always vibrating with Mackey’s arcane and passionate songs.

“Al-/beit words were our one rescue/they were those Night Choir/sang…” the poet writes in “Song of the Andoumboulou: 89.” The music is haunting, unforgettable and unforgotten, “. . . Night Choir/caroling the end of the world . . .”

In “Stick City Zazen,” the travelers sit in a Bengali lounge, capoeira cliff behind them, “. . . sun-/shine’s tight strings humming, sophic/wicks/words paled in whose light . . ./” Whose light, indeed, in this most Gnostic of sequential poems.

Experimental as this work is, these poems are not plotless; quite the contrary, they contain plot and narrative, motion and travel, passion and sex and danger. But the terms, the script, and the cast of characters shift from continent to continent in uncertain light and in uncertain, sometimes difficult to track constructs.

The poem, “Beginning ‘We the Migrating They,’” finds the travelers “. . . as if all/touched other, we their/press/outward unimpelled…/They/the open sea and we the raft/I clung to, left leg scissored/by hers,…” the narrative here dense and syntactically challenging although the drama and physical passion in the passage are evident.

Despite the complexities of the text, reading for the music does not fail to open the meaning of these poems, the incantatory fact of the music oftentimes actually defining the meaning, “. . . a music before music’s/com-/promise . . .”

In “Anacoluthic Light,” the poet observes that “. . . We were/not a band, all we did was listen,/sit/sipping herb . . . ,” the listeners in truth, of course, defining the band or bands, translating and decoding the music for the reader.

These poems are densely populated with myth, both public and private, the travelers (or listeners) achieving symbolic status as they move through Mackey’s unique cosmogony.

Epic poems are rare in contemporary times, and successful epic poems are even more rare. Blue Fasa, notwithstanding its complexities, rises above the limitations of our sound-bite world and deals, very often successfully, with the great philosophical verities, moving through Gnosticism, Platonism, and Egyptian mythology with apparent ease.

Mackey pulls off this feat, in part, through the vehicle of his musical theme, that unifying “thread” or “string,” as he describes the vibrating conceptualization of sound in his “Preface.”

All sound, however, is not music in Mackey’s universe. Sometimes sound is a sigh. In “Song of the Andoumboulou: 104,” for example, he writes “. . . We fended off sorrow,/the/earth awash in oil, black planet, a sigh so/light/feathers felt like/lead.”

And sometimes a song is almost not a song: “A loud Memnonian crack/sang transience. High/lapsarian wind. Night/pressed my ear to the/reed’s/complaint . . . ” (“Song of the Andoumboulou: 104½”).

Through the fateless wanderings of the Andoumboulou, through the riffs of Kenny Dorham’s trumpet, through the profound shift of the Gnostic dichotomies of darkness and light, through time and place, Mackey’s stunning lyrical thread continues to move us forward to transcendence.

While the varied historical references and allusions found in individual poems, or fragments thereof, tend to make this volume somewhat difficult to follow at times—as does the more or less experimental lineation—Blue Fasa fundamentally has particular value as a book of poetry and an ambitious one at that. It is a volume that will be addressed and discussed for some time to come—a distinctly worthy tribute to one of our outstanding poets.