XX: Poems for the Twentieth Century 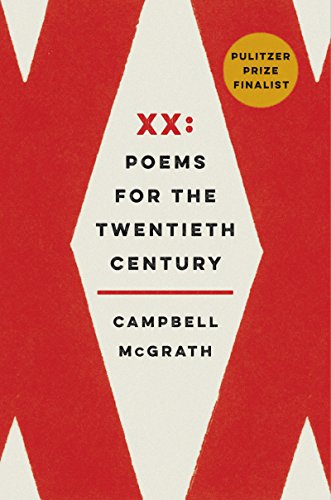 “McGrath’s book is filled with quixotic twists and turns within the framework of the 20th century . . .”

In XX: Poems for the Twentieth Century, Campbell McGrath combines his unique gift for narrative with a passionate enthusiasm for history. The result is a dizzying journey through what is arguably the bloodiest century in human history, a journey that begins and ends with the arts—that carries the freight of the 20th century’s history by way of 100 challenging and insightful poems, one for each year, plus an epilogue and a prologue.

This volume is literally a march through the 20th century, its ups and downs, its foibles and its lessons, a mapping of our current pathways out of and into what might become a new age, with new agencies and new ports of call. McGrath has painstakingly marked the footprints, year by amazing year, while for the most part not sparing the reader the wide and myriad shocks and revelations, the imprints of which are in some regard indelible and cogently apparent, often irresistibly so, in the scheme of things.

The poem, “Picasso (1900),” opens the century as Picasso arrives in Paris, observing, “. . . electric current will fuel the twentieth century/and so I myself shall figure in its art.”

McGrath moves forward, balancing psychoanalytic theory’s doctrine of the subconscious against early literary modernism’s ironic defeatism. In the poem, “Hearts of Darkness: Freud and Conrad (1901),” he muses that “. . . what we repress consumes us, starfish at tide-rise.”

In McGrath’s century, the reader proceeds by way of art, swimming as McGrath writes in “Apollinaire (1908)” “. . . like a great poet drowning heartward/Channels and arteries crammed with ink-bloomed flowers.”

These flowers are to bloom with blood through two world wars.

Through first-person journal-like entries by Mao, the under-history of China provides a uniquely eternal, albeit unsteady, heartbeat to the century, an echo or foretaste of much to come.

In the 1930s, McGrath introduces “Orson Welles: The Stage (1935),” who is “Fate’s chime, destiny’s roar. The narrator.” As interesting as this approach is, it unfortunately bypasses much of the shock of the 1930s world financial upheaval and its portents during this decade and beyond.

McGrath is, of course, the deciding narrator of this account, his moving, sometimes harrowing poems written in a plethora of styles and forms, from free verse, to sonnet, to villanelle, each poem meshing smoothly with the poems around it. This interlacing of a wide variety of poetic forms, both traditional and modern, constitutes one of the most effective techniques used in the design of McGrath’s collection.

Matisse picks up the postwar narrative in the poem, “Matisse: Nice (1946),” who comments, “This is the primal struggle: to make art./This is the passion of human existence: to endure.”

Art is survival—through depression, through war, through peace. Art by Matisse, art by Picasso, art by de Kooning, even the pop-culture “art” of Elvis Presley― McGrath tracks it all, through the late 1940s, through the 1950s and forward.

“Jane Goodall (1961),” however, asserts that the 20th century will be remembered, “not for its artistic glory or triumphs of technology/but for its incalculable losses, . . . ” for the “holocaust” of the animals and the environment.

While the human race may be known for such atrocities, McGrath continues to assert that we persevere through our art, and hopefully through that art we forge some semblance of atonement, of redemption.

He introduces the 1970s with Derrida, and, eternally, “Picasso (1973),” who says of his life, “You ask what I truly remember of it—everything and nothing.” He continues with, “Only art carries on, like a riderless horse.”

In “Two Poems for Czeslaw Milosz (1980),” McGrath writes, “the past assembles a cage of falling leaves in air./I will never escape the twentieth century.” Here, McGrath takes advantage of the broken rhythms of history by way of the elegantly uneven rhythms of his well-mastered free verse.

George Orwell is, of course, assigned the year 1984, and the Hubble telescope opens the final decade of the century, a century that winds down with “Digital Clocks (1992)” where “Nothing is ticking, . . .”

“Century of wraiths and indeterminacy,” continues McGrath in “Prologue (2000).”  “Chronos raises his hammer, a bronze bell chimes,” McGrath and Chronos becoming interchangeable as time and art echo down the indeterminate decades of what is at once irretrievably past and irrevocably present.

This is a remarkably dense collection of historically inevitable and widely divergent poems resonating with the long echoes of McGrath’s history, of his art, a timeless “bronze bell” that keeps on chiming. In that chiming, we hear the abiding lessons of history.

McGrath’s book is filled with quixotic twists and turns within the framework of the 20th century, a learned book of awakenings presented with such synoptic precision and penetrating force, with such careful aim, that it is likely to be widely debated, discussed, remembered.