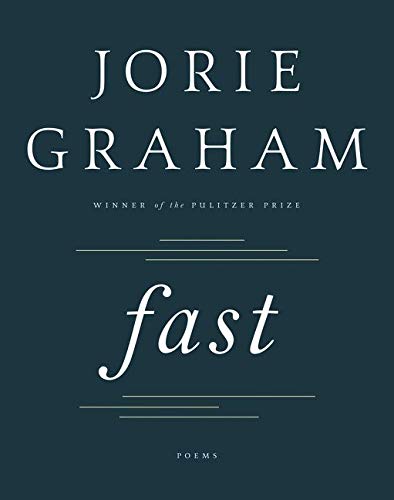 “These poems represent Jorie Graham at her unfettered best.”

Graham’s poetry over time has probed and interpreted the nexus where art and environmental issues, history and the natural world meet, fractionate, synthesize, and generally interact: the nexus of the individual human psyche.

In Fast, Graham examines this nexus in the context of time. She opens the book with the Robert Browning quote: “Then the good minute goes.//Already how am I so far/Out of that minute?”

The human psyche, simultaneously imprisoned in and liberated by the conscious fact of the eternal transitory, struggles in these poems to experience—and to  translate—the matrix of existence.

The poems in Fast range from meditations on war and peace to discussions of oceanic algal blooms, from emotionally harrowing accounts of the death of Graham’s father to a frank reminiscence of the poet’s own experience with cancer. She treats each aspect of this wide-ranging subject matter as one element in a series of psychological constructs, each embedded in, each permeated with, the essence of time in its most acutely human sense.

The poem, “Honeycomb,” moves dreamlike through a labyrinth of medical procedures (“. . . Time zones . . .”), the sea trapped in a monitor screen, the poet switching to an exploration of the internal and its psychological connectedness, breath measuring breath as the basic human unit of time.

The theme of the sea continues in “Deep Water Trawling,” the poet exploring ecology, our human vulnerability, an eschatology of consequence.

“. . . We are wrapped and wrapped in gossamer days . . .” Graham observes in “Shroud,” the hours and minutes of these days intersecting every facet of our experience, becoming eventually the clothes of our graves, the shroud being the final option available, the ultimate urgent statement, the last metaphor.

In “We,” Graham investigates the past, most especially the wars of the past, where history and fiction co-habit in a shifting and often deadly continuum: “. . . Collapse the it-has-been/says the wind . . .” And the wind is as good as its word, for we “. . . Are in the enigma of/pastness . . .” and the wind itself is the final arbiter of outcome, the wars of past and present melding together in one continuous pastiche of horror.

In the title poem, “Fast,” Graham converses with a bot, observing, “. . . here’s the heart of the day, the flower of time—talk—talk—,” temporality remaining the ineluctable substrate of communication, a communication  which blooms inevitably with an ever-increasing freight of technology that invades our most intimate spaces, literally delimiting time—and everything else. “Each epoch dreams the one to follow/,” writes Graham later in the poem, an act, perhaps, of verbal resignation.

In “Reading to My Father,” Graham keeps death-watch with her just-deceased parent, “. . . here in this timestorm—this end-of-time/storm . . .,” struggling with her father’s transition, the inevitable chronology from living creature to having-lived creature who is now set to move into the future as a kind of symbolic nexus, the poet’s temporal storm a function of loss and the sense of loss, as she measures this past and this pastness, this present and this presence.

“. . . The day is/long. It flirts with nothingness. It always does./” writes Graham in “The Medium.” Nothingness cannot be escaped, although there is a kind of renewal with each new observation.

In the poem, “Vigil,” also written for her father, Graham, meditating on death and dying, observes that “. . . They bind each day in chains at the end. Daylight shows it./It pierces us with its red spear . . . ” It pierces the living.

Graham conjures Lascaux in the poem, “Dementia,” the great animals hunted “. . . by the once . . .,” hunted by time, time still burning like torches on the walls of that ancient art.

“. . . The thing about history is/it drains it flows but has no borders . . .” writes Graham in “To Tell of Bodies Changed to Different Forms.” Because history is made up of events embedded in time, it shifts and morphs.

Time incarnates us, argues Graham in the aptly named “Incarnation,” conferring our humanity upon us with the days, hours, minutes and seconds through which we gravitate. “. . . Smell it the scent of time, it is skin, . . .” Time which is our shroud is also our corporality, operative within the cosmology of the self, of the other.

“. . . Oh continuum do not lie to me with this delicate weight of/time, . . .” writes Graham in the poem, “The Mask Now,” the continuum bearing the weight of the bright mask her father wore through the last days of his dying to protect against the light.

Browning’s “good minute” does not stay. And this same mutability moves through the poems in Fast, forming and transforming Graham’s lyric line, the co-function of which unites past and present. Because, of course, these brilliant and spacious poems become the continuum through which they pass, moving through Graham’s numinous transitory like a dream.

This is the ultimate wrap of one’s experience, vividly traced through the conflation of ancestry and circumstance, through the essences of a humanity we struggle so very hard over time to comprehend. These poems represent Jorie Graham at her unfettered best.