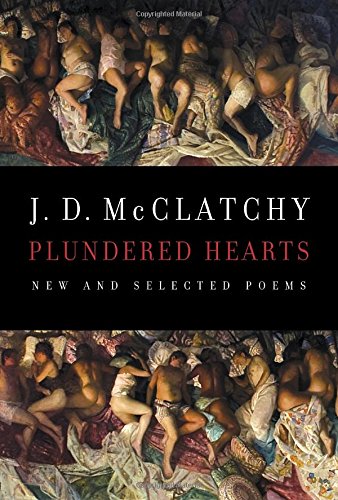 J. D. McClatchy is a poet of brooding sensitivity and flawless erudition. His acute sense of history together with an adroit flair for received forms mirrors a sensibility that can arguably be described as nothing short of Renaissance postmodern.

Mr. McClatchy’s prosodic talents combined with his unflinching ability to address and interpret human sexuality—its sadism and savagery as well as its passion and acute tenderness—have rendered him one of our foremost poets of love, both homosexual and heterosexual. And on the subject of love, this poet pulls no punches.

Plundered Hearts is a memorable selection of Mr. McClatchy’s work. As is the custom with such collections, the book opens with new poems followed by work chosen from previous books: Scenes from Another Life (1981), Stars Principal (1986), The Rest of the Way (1990), Ten Commandments (1998), Hazmat (2002), and Mercury Dressing (2009).

Among the new poems, “The Novelist,” a poem in Spanish sextillas, finds an idle novelist in the company of his bookshelf “. . . where so much/Sadness is fingered and then unfurled./The wrong address, the inadvertent touch,/The revolution, the unanswered call,/The poisoned bouquet, the back-alley brawl.”

In the poem, “Bacon’s Easel,” Mr. McClatchy moves beyond love’s “poisoned” bouquets and “back-alley” brawls to the arbitrary brutalities of sex and the implied agonies of witness and from there to the suggested limits of suffering: “. . . love’s brutal task/And the overmastered scream it ends in.”

And yet, in a poem such as “My Robotic Prostatectomy,” he can enthusiastically and positively address love as that “. . . little death/Clenched at the climax of one/Of the few unambiguous pleasures.” In this poem Mr. McClatchy deals with yet another theme, the nature of temporality, emphasizing the degree to which the past is urgent in the present, his surgery bringing him so much closer to a realization about death, about reckoning.

Love, sex, and time intersect again in the poem, “Cağaloğlu,” in which Mr. McClatchy writes of the “Congestive, crotch-scented vapor” congealing in the Istanbul public bath—a celebrated bath which has been in continual use since 1741—the experience of bathing in which encumbers the poet with “hopeless hindsight” and a flood of historical reckonings.

This is poetry with an attending intelligence, a poetry of dense subject matters and complex versification which nonetheless retains a respect for the readers, for their anticipated travail in wrestling with texts which could conceivably test the limits of both engagement and endurance. Given the complexities of this collection, the author’s notes at the end of the volume are an excellent resource. Complexities notwithstanding, for the reader who loves texture, girth, and deep sensation, this is a book that will prove to be a rewarding read.

Plundered Hearts has a seamlessness of content which is rare for the collections of “new and selected” poems so popular nowadays. Such collections by their very nature are cobbled together from a series of different books, each initially having been designed to be a cohesive, stand-alone whole. The attempt to combine work from various volumes often results in a certain choppiness of theme and/or prosodic content. This book tends—on the whole—to avoid these pitfalls.

Love and temporality—universal themes for this poet—dominate in Scenes from Another Life (1981). The poem, “The Tears of the Pilgrims,” ends with two lovers, one of whom was found meditating on the “available mode of infinity” while the other, “. . . bewildered by himself,” looked out of a window “Whose faults kept doubling the stars.”

Stars Principal (1986) continues Mr. McClatchy’s struggles with mutability, that fusion of love and time which inevitably equals loss. The flawless sestina, “The Cup,” works and reworks this theme, “the fire’s given set of words” that drifts over the lovers “. . . before it halts at sorrow.”

The Rest of the Way (1990) features the poem, Kilim, a tour de force sonnet redoubled (15 sequential sonnets, the last of which, the text, is composed of the last lines of each of the preceding 14 sonnets). Sonnet XV continues Mr. McClatchy’s investigation into love and temporality: “. . . love’s changing aspect in starlight/We can see and hear as a single page of text.”

And the text continues. Ten Commandments (1998), for example, is an eclectic mix. “My Early Hearts” recalls a childhood excursion to the science museum where the poet loses himself in the walk-through heart, loses himself “. . . walking around/And around his own heart . . ./” Contrast this to the acutely unsettling sadism of “Proust in Bed” to get a feel for the scope of these poems.

The poem, “Orchid,” from Hazmat (2002) is a riveting study of love and its triggers in which Mr. McClatchy revisions the well-worn metaphor, love=flower, making it altogether fresh. Love’s role in recapitulating mortality is never far from the poet’s mind. He writes, “I have death’s dust-seed/on me. I have it from touching you.”

Excerpts from Mercury Dressing (2009) close the volume, the title poem of which provides a kind of summing up. The poet, watching Mercury, observes that “. . . suddenly he disappears,/As so much else has down the years . . ./Until I feel him deep inside/The emptiness, preoccupied.”