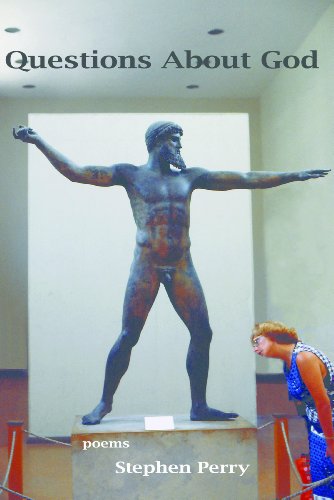 Questions About God, an ambitious volume by Stephen Perry, calls attention to a variety of issues about God—about the presence or absence of divinity—encouraging us to engage in thought processes designed to make us sometimes shockingly aware of the complex issues extant in such questions.

In accomplishing this, Mr. Perry makes use of poetic techniques, vivid descriptions, and other devices to good advantage.

Beginning with the book cover featuring a woman reading the museum notes at the foot of a stature of Zeus, there is a clear suggestion of curiosity about God and/or the gods. Mr. Perry moves to heighten that curiosity with a series of poems which, by choice and/or design, causes the careful reader to come to grips with the deepest and most pressing issues of belief—with visitations into realms of awareness of some of our most vital aspects of living, of experiences in the world.

Mr. Perry chooses the explicit when it serves to make the point, to dramatize the most intimate of human experiences and to set the stage for a coming to terms with meaning. He always makes the inner world a particularly compelling subject—and forum—as he demonstrates in the poem, “Angel Punch.”

In this poem, Mr. Perry invokes the grand dragons of thought: invention, innovation and the distinct possibility of divine intervention or inventiveness. No extreme, according to Mr. Perry, is too much for man—all of which suggests the problems inherent in a theory of the presence of a grand design. “Angel Punch” reminds us that the intellectual battle is indeed joined.

Sex and sexuality are frequently addressed in these poems. Sexual themes range from sex as recreation to sex as procreation. From patterns and norms to singular sexual realizations, Mr. Perry’s frequent allusions to the flesh are a ubiquitous feature of this volume. He makes no pretense of timidity in addressing the rawest of topics and, in fact, celebrates some of those topics in explicit details of procedure and enactment.

By placing the reader in the midst of the poem’s action, Mr. Perry affords him or her an opportunity to stretch the imagination to encompass realities that might otherwise remain abstractions. A good example is the poem “Gross Anatomy on Her Birthday,” in which Mr. Perry writes, relative to a medical dissection, “. . . my mind babbles over the corpse,/though my hands are professional, competent,/disengaged as I remove her breasts and place/them in stainless steel basins.”

Mr. Perry uses the raw edge of experience and scientific knowledge to great effect in his examples, approaching at times the extreme to drive home a message, to raise a question, or to express and illustrate a doubt.

This is not a book for the passive reader, but an absolute treasure for those anxious to come to terms with some of the personal and emerging issues of existence in what we know to be a rapidly changing world. Mr. Perry is a poet of consummate skill who is effective in employing imagery, metaphor, repetitions, musicality and the like.

In his concluding poem in this collection “These Things Are Important,” Mr. Perry provides a landscaping of sorts and a listing, if you will, to remind the reader conclusively of the pure range of considerations involved in his theme. The poem is a framework within which future questions about God might be formulated and expanded upon. This volume of poetry is truly only a beginning, with no known ending in sight.

Mr. Perry cautiously, lovingly sets the table for abstract and intellectual questioning. He also shocks sometimes, without apology, with the rawness of experience—all this in his challenging, seductive, Questions About God. The careful reader will likely determine that the book contains some answers as well, but that remains a highly individual matter.

While Mr. Perry’s presentation, including the sequential arrangement of the poems in the volume, is not necessarily linear and might in fact be considered quirky by some, the poet at no time abandons his questioning, his exploration, his journey.

In his considerations of the ineffable, Mr. Perry has provided us with an excitingly different read.