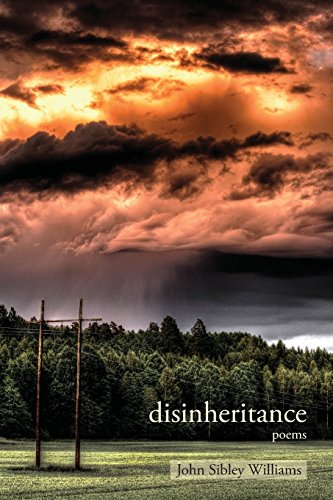 “poems of longing, of grieving and wanting, poems of a recovered past and its once lost values. . . . an abundant volume to read.”

Disinheritance: Poems is the second full-length collection by the poet John Sibley Williams. At once ambitious and enigmatic, these poems are charged with a mysterious energy bordering sometimes on the untranslatable. That said, the kinetic strength of the energy itself coupled with the dark mysteries of blood and bone that permeate these charged “stories” in verse, merge the work as a  whole into  a memorable exploration of mutability and loss.

After much careful consideration, the author comes to terms with the inevitable bond of family, its cominglings, its extensions, even its attachments in blood—its sex-typical arrangements and ordering. The author offers this intriguing weave, suggesting at the same time alternative paradigms and systems of inter-relatedness.

Williams is careful to delineate what has come to be understood as truth in a family—truth etched in experience. While some of the poems verge on being a bit too prosy, the stories nonetheless resonate in the telling and at times compensate in the way they are arranged on the page, inviting one to return to them over and over to recapture their compelling meanings.

In “Truce,” Williams writes that “the late salmon moon is filled//with rivers and old shadows . . .” The river that flows through these poems is, in fact, ancient and unquenchable, “. . . bloody to our shore . . . ,” he writes in “Salmon Run.”

The metaphoric river of Williams’ “telling” is an interesting approach to a decidedly challenging family history, one filled with the torments of illness, a history measured in the crucible of survival. These poems underscore the special forms of belonging and interaction that families live through simply because the individual members exist—and persist—as a family unit.

Williams tracks this family history through medical challenges, through the fixed and the flexible, moving through grief and loss towards the possibility of emergence into patterns much more accommodative, patterns filled with new probabilities.

There is a turn in this collection at the poem “A Dead Boy Distinguishes Proximal from Distal.” Williams conjures “Things defined by their nearness/to words . . . ,” these “things” re-negotiating the relationship of title to text. The poems that work best in this volume have truly explanatory titles, titles that are true to the thematic, and, by being so, are effective through closure.

In the poem, “I Sit My Grandfather by the Mouth of the Columbia River,” for example, the narrator places the “ghost” of his grandfather in alien space, expecting the placement itself to be, perhaps, transformative after the fact.

These poems represent the give and take of memory, a plea to the powers of wishing, of artificial restoration of what was or is perceived. Mutability is paramount here. Clearly what was not, will never be.

The poem, “Hemophilia,” is a pivot—fragmented, heartbreaking, oddly distant—a poem that defines much of what precedes and follows it, a girl, for example, “ . . . bleeding/from every line in her palm./” The poet remains “. . . Entrenched/in myself. Knowing//I’d be the one to get away with it,/this time . . .” But, of course, no one “gets away.” Chance alters and becomes our imperative.

This book is not an easy read, especially when taken not simply as family drama, but in its most generative and urgent aspects. In these poems, Williams explores the social fabric, the evolutions in societal values that continue in a state of flux. Add to that an impasto of health considerations and concerns, which in this collection are paramount, and the question remains, where indeed does one go from here in a world of new ways of perceiving and being, in an environment of ever-increasing social and medical complexity?

Grief is the inheritance of the living. In the poem, “Away from Stillness,” “The blood that once/impregnated the sky/has whitened to snow,/and for six months/we have tried to return/from barren winter/to that raw place/of hope./”

Blood is a curse and a blessing. Williams writes in “A Dead Boy Learns Metaphor” that “The poetries of white blood cells/help us make sense of the body./” But, as the body itself becomes a disinheritance, what sense is to be made of that? Chance—that river of uncertainty—makes its own rules.

Language adjusts and readjusts as Williams explores poetry as a coping mechanism. “Today we’ve lost the death that keeps us./” he writes in “A Dead Boy Fishes with His Dead Grandfather.”

Death knits myth to bone in these poems; it drifts in the river in which the dead fish—or learn to fish. Death in fact knits life to life and death to life. Williams’ poems are not so much fatalistic as they are realistic, poems that reflect a skillful employment of a certain metaphysical swagger, poems of vital and intensive engagement.

There is no grief more profound than this. No change more harrowing to face. Williams’ poems remind us that death is the universal inheritance. It disinherits us all, over and over.

These are poems of longing, of grieving and wanting, poems of a recovered past and its once lost values. This is an abundant volume to read.