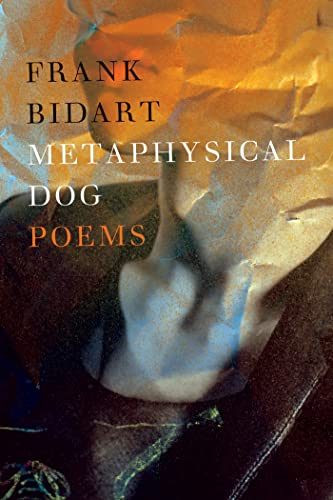 “Mr. Bidart is the friend of narrative, and narrative is his ally.”

For someone who, by his own statement, has written little in prose about poetry, Frank Bidart in this volume spends a good deal of effort and focus on posing the Big Questions of poetry and volunteering approaches and possible pathways to contemplation of same.

In these poems he offers much food for thought, patterned much in the way in which he, in particular, has sought solutions.

Metaphysical Dog is by any measure as meditative and contemplative as you might expect of Mr. Bidart. He offers a collection of poems filled with a range and metaphysical scope seldom put forth, poems infused with a remarkably diverse variety of subjects, encounters, and speculation, but with an assertiveness that is brazenly intellectual.

The role of sex in Mr. Bidart’s personal development, especially his “coming out,” is treated and inflected into several poems. As to complexity, after reading and considering several iterations of these poems, do not be surprised to find yourself on an intellectual trapeze. At the same time, if you are looking for poems that demand thoughtful consideration, this book has answered that call.

Metaphysical Dog is a volume that ushers the reader cautiously and innocently―the dog as a doorway to that which follows―into the death of Mr. Bidart’s parents, etc. This is the time to move to the end notes he has considerately provided―notes furnishing needed background and insight into the development and direction of particular poems.

Mr. Bidart is the friend of narrative, and narrative is his ally. As he tells us in his notes to the volume, “Narrative is the ghost scaffolding that gives spine to the great works that haunt the twentieth century.” But even Mr. Bidart uses narrative selectively. For inspiration for particular poems, it is largely a matter of picking and choosing and shaping.

There is in the poem “Dream of the Book” the labored search for self through all of the labyrinths and mazes of life. You dream, live, look back, reflect for a time, find “unanswerable but necessary questions”―question after question throughout the book.

In the poem “Whitman,” walking back from a Robert Viscusi reading, Mr. Bidart expresses, “A poem read aloud is by its nature a vision of its nature.” It takes more than vision to liberate the self, to wrestle with the issues of the known—it takes self-knowledge as well as knowledge of the world.

Throughout the book Mr. Bidart presses on along with other cravings of the soul: of finding flesh, flesh of the wanting and the unwanting. As he pointedly reminds us, humans learn that we cannot remain on the precipice forever―there is a terminus we must all reckon.

In so many of his lines, there is the stated or implied openness to journeys and differing types of discovery, some introspective, and some just dealing with a morphing of landscapes―external and internal.

Near the conclusion of Metaphysical Dog in the poem “On This Earth Where No Secure Foothold Is,” Mr. Bidart leaves us with this reflection, that there is one final resort, that: “Your weapon is your mind.”

As to the gift of this particular book, immerse yourself in the pith of it—let it grow in your consciousness—like a good poem.

There is something special about book made poem—something every true poet needs to be able to sense about the inevitability of closure as well as about its definitive nature. And yet we end with a portrait in mind―Mr. Bidart pressing on, deeper and deeper still.