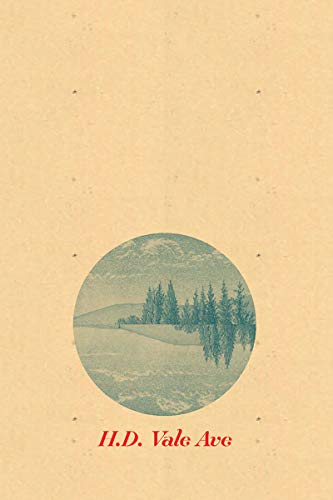 Vale Ave has been released by New Directions Press as Poetry Pamphlet #7 in their pamphlet series, which represents a significant reprinting of this outstanding long poem by the legendary high modernist poet, H. D. (pen name for Hilda Doolittle).

Vale Ave (Latin for Farewell and Hail) is an ambitious 74-part poem that H. D. summarizes in her introduction as a retelling of the “Lucifer-Lilith, Adam-Eve formula” which “may be applied to all men and women . . .”

For the purposes of Vale Ave, H. D. tracks this love story through the characters of Elizabeth (the niece of the Elizabethan poet and alchemist Sir Edward Dyer) and Sir Walter. These two, according to H. D., “secretly and mysteriously” become lovers during the last months of Sir Walter’s life in the Tower of London, “meeting and parting” through “. . . late Rome, dynastic Egypt, legendary Provence, early 17th century England, and contemporary London.”

The result of this ambitious project is a love story bridging centuries and civilizations with the sensual alchemy of H.D.’s unparalleled talent.

In Vale Ave H. D. once again is offering a challenge to tradition and/or beliefs about the more pervasive views of the figure of Adam and his relationship with Lilith, posited to be his first wife according to Jewish folklore (Alphabet of Bin Sira). Lilith was supposedly created at the same time and in the same way as Adam, making her co-equal with her male counterpart.

Vale Ave is filled with vignettes of H. D.’s personal history and perspectives crossing times and even continents when spirits rise and fall with all the human passions, guiles, and delineations of personal anticipations and consequence.

H. D. works through the material of history and the history of a passionate love affair, never missing an opportunity to spice things up with alchemical allusions (Sir Walter was himself an alchemist), with evocations of the natural world, and with significant local and regionalized circumstance.

Through her technical dance, through structural cleverness and discipline, H. D. reminds you that you are caught up in the art and craft of poetry, that both form and substance do matter, and that imagery must be a major force.

In Part XXII, H. D. herself makes the following assertion, symptomatic of so many: “For all the thrones and letters spell one story,/and only one, Love is the altar that we burn upon;//did he find that, after his frantic quest,/experiments, his journeys and the search//everywhere in old books, Latin and Hebrew texts?”

But we all know it was H. D. who could not be contained for long. Consider this passage in Part XIX: “Could I forget, would I forget?/Lucifer, you have queens about you now,/Helen and Guinevere; Semiramis//orders her servants to direct the prow/toward Egypt—is it Egypt?/I will know tonight, when I escape//and stand within my circle . . .”

H. D. was always seeking to stand in her circle, and in so many ways she created her circle—all within the pantheon of what became her legacy.

The fact that H. D. was an advocate of sexual freedom has long been established, but it does not (and must not) overshadow her commitment to the truth of poetry and that alone is enough to vouchsafe her achievement and her place.

It is no real surprise that the Academy of American Poets chose to honor H. D. for her lifetime achievements in 1960—she returned from Europe to America to receive the award in person. She died the following year.

The release of Vale Ave in pamphlet form is clearly an invitation to readers and practitioners of the craft of poetry to take a 360° look (with wonderment) at H. D.—the whole retrospective picture of the panoply of her life and works, to consider the times in which she wrote. One need only to examine the crisp surefootedness of her language and imagery, her daring to confront and question popularly held beliefs, her push to move the literary canon forward.

Consider New Directions Press and the sheer power of its collective tributes so beautifully presented in this landmark pamphlet series.

In the words of H. D. in Part XXXV, “Ave and vale, but the parting came/before the greeting, it was vale, ave,//keep the wine till the last,/I hold this cup, I need not taste this sleep/.”

And in her earthly searches, how far did H. D. go? Perhaps her own words in Part XL act as revelation—“. . . and we know the answer//to ritual and to all philosophy,/in the appeasement of the ravished flower.”