Alone and Not Alone 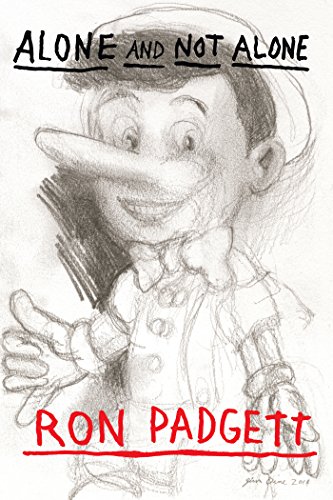 Ron Padgett is a writer with a consummate sense of the fantastical as it intersects the quotidian. A prominent second-generation New York School poet, Padgett’s publication history is impressively varied; a finalist for the Pulitzer Prize in Poetry in 2012, Padgett, in addition to his many volumes of poetry, has produced distinguished translations from the French of work by Apollinaire and Reverdy, among others.

Reading Padgett’s disarming poems is always a delight, and Alone and Not Alone certainly does not disappoint.

Notwithstanding this poet’s famously seductive wit, the poems in Alone and Not Alone are often accompanied by a tinge of metaphysical melancholy bordering on bemused fatalism.

“Reality,” he writes in the poem by that name, “has a transparent veneer/that looks exactly like the reality beneath it,” a veneer that will sometimes “. . . flicker and vanish,/though it is still there./You must wait a day or two/before attempting to see it again.” When Padgett reminds us that “Sometimes the veneer becomes detached/and moves slightly away from reality,” he is moving us (with his characteristic lightness of touch) smack dab into the middle of epistemology.

And isn’t epistemology—the nature of a more generalized knowing—arguably the natural habitat of poetry? In the poem, “Face Value,” Padgett writes, “The Wall of Forgetting” is “. . . not a wall it’s a mirror/that picks your face up off the floor/and whirls it onto a head/that has gone on without you.”

Padgett’s head is filled with serendipitous metaphor and seemingly wacky, though at the same time eminently sane, aphorisms. “Everyone is warm enough/to be alive,” he writes in “The Plank and the Screw”. In the poem, It All Depends, he comments on the 19th century during which “Cottages go by/and music piles up/like excited dead people.”

Mr. Padgett does not shy away from lofty subject matter, as the poem “The Elevation of Ideals” illustrates. In formulating a set of ideals, he advises that you never “. . . use metaphors in the construction, for over time/they will shift . . .” His metaphors are remarkably stable and effective, albeit couched in the relaxed informality of his wit.

Of course, you can always, as Padgett writes in “You Know What,” “Take your philosophy/and put it in a paper bag/and carry it to a destination/and open it and see/if it looks back at you/and if it does/then you are occurring/because it is occurring too.”

Any questions so far?

New York School poets are well known for their interest in and involvement with the visual arts. In keeping with that tradition Padgett offers us “Art Lessons,” lessons like “Narrative Painting/The Madonna never walks” and “Sculpture/Don’t move.” Lighthearted as these painterly definitions may appear, they presume a poet willing to deconstruct art and the meaning of art with a good-natured but nonetheless surgical incisiveness.

In “Syntactical Structures,” the poet muses, “It was as if/while I was driving down a one-lane dirt road/with tall pines on both sides/the landscape had a syntax/similar to that of our language,” Padgett’s wry sense of melancholy unexpectedly shadowing the pines along this lonely road.

In his poem, “Homage to Meister Eckhart,” Padgett, after a detailed discussion of the “void,” concludes that the best thing to do is to “. . . wait for the nothingness of God.” Here again is that almost serendipitous fatalism—the void at the limits of syntax, at the limits of the philosophy Padgett advocates carrying around in a paper bag.

This poet asks, answers, and dismisses questions with impunity. “I release the question mark/From its tether and it floats/Like a life jacket,” he writes in “Shipwreck in General.” There is no need to answer, no need, in fact, to ask, given that things are, in general, a shipwreck. That said, there is, however, sometimes a need to cling to the very act of questioning as if the act in itself were a life jacket—one that actually floats.

Life is reduced to child’s play. Or not. Padgett, remember, does not commit to questions or to answers.

The closing poem in this collection, “Alone and Not Alone,” which is also the title poem, opens with the following lines: “Out of the water/came the one/who reached back/into the water/and pulled out the zero.”

In poem after poem, Padgett gingerly approaches the abyss, hesitates a moment, then skips a melancholy rock across the non-existent surface of the void.

And we can hear him gently laughing.