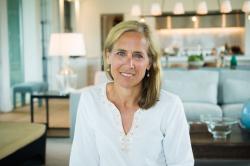 Jeanne McWilliams Blasberg is a novelist, essayist, and adventurer. Her most recent novel, The Nine (She Writes Press, 2019), has been honored with the Foreword Indies Gold Award in Thriller & Suspense, Juror’s Choice in the National Indie Excellence Awards, and additional awards from Chanticleer, the International Book Awards, Reader’s Favorite, and more.

Her debut novel, Eden (She Writes Press 2017), won the Benjamin Franklin Silver Award for Best New Voice in Fiction and was a finalist for the Sarton Women’s Book Award for Historical Fiction.

After graduating from Smith College, Ms. Blasberg embarked on a career in finance. Even as she worked primarily with numbers, she always had an interest in writing. She made stops on Wall Street, Macy’s, and wrote case studies at Harvard Business School before turning seriously to fiction.

Ms. Blasberg founded the Westerly Writer’s Workshop. She sits on the boards of the Boston Book Festival and Grub Street, one of the country’s preeminent creative writing centers.

She and her husband have three grown children and split time between Boston, MA, and Westerly, RI. She loves to travel, play squash, ski, and take in the glorious sunsets over Little Narragansett Bay.

The Nine: A Novel

The Teller of Secrets: A Novel

The Teller of Secrets by Bisi Adjapon is a coming of age, character-based novel that follows Esi’s first-person recounting of her girlhood in newly independent Ghana in the 1960s.

Of Women and Salt

May 10, 2021
Reviewed by:
Jeanne McWilliams Blasberg

“Of Women and Salt is a beautifully written novel that turns like a kaleidoscope in the light, illuminating the blurry delineation of who is an insider and who an outsider.”

“Jerkins adeptly delivers a timely message as well as a novel replete with symbolism and metaphor.”

How the One-Armed Sister Sweeps Her House: A Novel

How the One-Armed Sister Sweeps her House is the type of novel you finish and then return to Chapter One to begin again.

“Burnt Sugar explores security and permanence, the lengths to which people go in search of what they were denied as children.”

White Ivy is a suspenseful novel with a protagonist who is intentionally portrayed as an anti-heroine.