The Teller of Secrets: A Novel 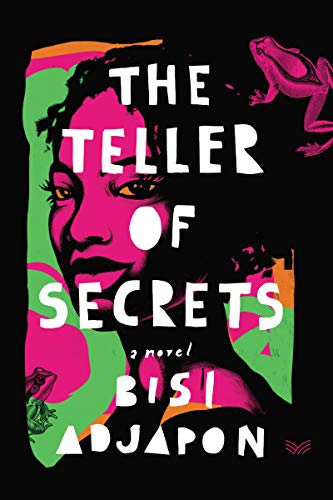 The Teller of Secrets by Bisi Adjapon is a coming of age, character-based novel that follows Esi’s first-person recounting of her girlhood in newly independent Ghana in the 1960s. The narrator’s voice is fresh and observant, and in the opening chapter age-appropriately and amusingly naïve. The opening lines are a warning from a young friend to watch out for frogs after it rains. If a frog jumps on you, says Esi’s friend Elisha, you’ll turn into a man. Thus, Adjapon introduces readers to a central theme: the conflict of wanting to remain a girl in a man’s world.

Adjapon’s novel has much in common with Clever Girl by Tessa Hadley. Although set in different countries and decades, both books open with precocious protagonists witnessing the hypocritical behavior of a parent. In the case of Clever Girl, as is the case with many books of this ilk, the protagonist rails against a mother, trying to make meaning of an absent father. However, in Teller of Secrets, Esi lives with a domineering father—who is nevertheless, “the man I love the most”—and her stepmother and half-sisters in Ghana, while under the impression for most of her youth that her Nigerian mother is too busy to spend time with her.

As the novel begins, Esi and her father are on a trip to see a doctor in Accra because of Esi’s painful ear infection. They stay in a hotel where Esi reports, “the bed is making shweequaw shweequaw shweequaw sounds. I open my eyes. The moon is shining and Papa is a shadow on top of a woman who is also a shadow. The shweequaw shweequaw is because of the way they are moving. Something tells me I shouldn’t be watching, but my eyes won’t close.” In those innocent lines spoken by a nine-year-old is an image that hangs over the entire novel: illicit sexual behavior committed in secret yet out in the open, coupled with Esi’s inability to look away or deny what she and everyone around her must see.

The Teller of Secrets offers many interesting insights into the place and time of its setting. The particular historical moment and the traditional family structure in which Esi is raised enables Adjapon to amplify the theme of patriarchy and its effects on a young woman’s life. Esi’s father is the headmaster of a school, a valuer of education. He is proud of Esi’s intellect, saying she is “cooked with intelligence. Like Fire.” She knows she is her father’s favorite, a fact not lost on her stepmother and sisters, which causes a fair share of domestic drama. Esi’s father is determined for her to excel and surpass the professional stations of her sisters; however, that success appears out of Esi’s control, meted out sparingly by her father and his surrogates.

The novel’s powerful rebuke of the patriarchy continues in its willingness to explicitly recount Esi’s sexual maturation and the confusion and consequences that come with it. It is as if in portraying Esi’s sexuality in painstaking detail, Adjapon is daring the reader to not look away, just as Esi couldn’t make herself look away from the squeaking bed in the motel room during the book’s opening pages. It is as if the author is asking, Does the detailed description of a young woman’s sex life make you uncomfortable? Are you complicit in setting patriarchal expectations as well?

Early in the book Esi touches her genitals and then is raped by a young boy who was supposed to be watching her. Afterward, her stepmother forces her to sit in scalding water and ginger, saying, “I hope you’ll remember how it burns the next time you’re tempted to touch your under-canoe, you bad girl!” Of the experience, Esi tells readers, “Auntie says the punishment will help me close my legs until a man chooses me for a wife.”

As she grapples with these events, Esi continues to yearn for her mother: “If she were here, maybe she could explain about boys and girls and my secret place. When I ask Papa, the words come out wrong and his jaws clench and his bottom lip rolls out. When I keep at him, he asks me if I want a cup of Milo or do I want money to buy peppermint.” But she and her brother, Kwabena, will eventually learn that their mother is not absent but dead, though their relatives believed they were too young to be told.

Throughout the book Esi is funny in her very direct and sometimes biting language. Esi enjoys masturbating as well as “playing romance” with older girls at her boarding school. She embarks on a sexual relationship with a member of her extended family named Kayode who lives in Nigeria and later on conducts a relationship more appropriate in her father’s eye, with a man named Rudolph. In addition to finishing at the top of her class, she is a star sprinter and continues, after a much sought-after secondary school education, to university. Esi seemingly enjoys, more aptly put, demands certain freedoms in her life because of her father’s protection; however, the heartbreaking conclusion of the novel portrays a father who cannot, in the end, abide all his daughter’s wishes, trapped by the way “things are done.”

The early chapters of The Teller of Secrets are particularly gripping as Adjapon does a masterful job of portraying the world through Esi’s childish eyes. If the book has a shortcoming, it would be the speeding of time and events in its second half. The author touches on so many important topics in this novel—racism, abortion, fertility, divorce, as well as conflicts between Ghana and Nigeria in post-colonial Africa—that one could argue they were not all given their due time on the page. Still, the novel never loses sight of the thematic tension of its opening, as Esi vows, “I’ll never again wish for a frog to turn me into a man.”