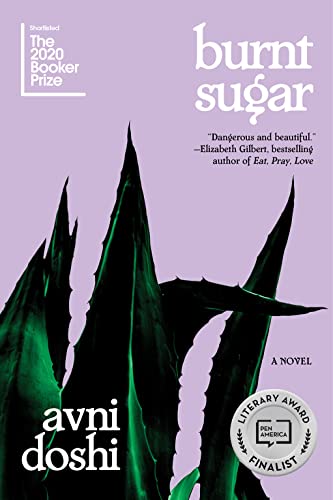 “Burnt Sugar explores security and permanence, the lengths to which people go in search of what they were denied as children.”

Burnt Sugar is an incredible novel with messages and characters that remain with its reader far beyond the final line. In this sometimes humorous, sometimes dark, always ephemeral piece of literature, Avni Doshi unspools an original take on the theme of inheritance—what we take on willingly and unwillingly.

The first chapter introduces us to Antara, narrator and protagonist, a woman obligated to care for her mother. Antara explains, “The reason is simple: my mother is forgetting, and there is nothing I can do about it. There is no way to make her remember things she has done in the past, no way to baste her in guilt. I used to bring up instances of her cruelty, casually, over tea, and watch her face curve into a frown. Now, she mostly can’t recall what I’m talking about; her eyes are distant with perpetual cheer.”

On the surface Antara does the right things: moves her mother in with her, takes her to the doctor, experiments with her diet. But resentment simmers as she admits, “It seems to me now that this forgetting is convenient, that she doesn’t want to remember the things she has said and done. It feels unfair that she can put away the past from her mind while I’m brimming with it all the time.” The story soon becomes as much about Antara’s remembering as her mother’s forgetting, a revelatory examination of memory both individual and shared.

The novel’s structure mirrors this tug of war, pulling back to Antara’s childhood and even to her mother’s, then propelling forward to reveal new truths (or perceived truths) about the characters. As a girl, Antara suffers her father’s abandonment, and her mother’s exploits render them homeless for a period. Her grandparents are saviors, although their rescue is always tainted with grim-faced displeasure and disapproval of Antara’s mother.

These intergenerational ties are woven masterfully, highlighting parallels in behavior and appearance, as well as the genesis of wounds and trauma. With biting language and dark humor, Antara slowly reveals the troublesome behavior she undertook while emerging into adulthood, further developing her complex and multi-dimensional character. All the while in the present, Antara is so fixated on the wrongs inflicted on her in childhood that she evolves into a madness that echoes her mother’s neurological ills.

Antara attempts to hold it together with the very societal trappings her mother eschewed. She finds a perverse safety in marrying Dilip, a repatriated Indian who “grew up in Milwaukee, where his ears knew only soft Q-tips and suburban stillness.” Antara’s family is a product of Pune, an Indian city described by Dilip as sensory overload, loud and too pungent. Antara goes to great lengths to create a calm home her husband will find satisfactory, yearning for a “marriage free of gray, fuzzy edges,” and even calculates a pregnancy in order to stay safe from the chaos of her memory.

In this way, Burnt Sugar explores security and permanence, the lengths to which people go in search of what they were denied as children. It is a commentary on how women play by the rules in order to establish a place from which they can’t be evicted—and the danger that lurks when they choose not to.

Dilip’s perception of his wife’s situation gains importance for the reader as Antara’s perspective becomes increasingly unreliable. “It’s hard,” he notes presciently, “for me to understand your relationship with [your mother] sometimes. Being around her is very stressful for you. And the other way round. To be honest, I wonder if you’ll make her worse or better.” Antara does eventually succeed in returning her mother to the present moment: lucid, even sharp, herself again. But in that particular moment of clarity, when the two women are finally able to confront each other on an even battlefield, Antara realizes the power she has over her mother’s well-being.

The novel ends with an incredible crescendo as the major characters gather in Antara and Dilip’s apartment. Antara struggles to juggle a newborn baby, a self-destructive mother, a judgmental grandmother, a manipulative mother-in-law, and the reappearance of her long-lost father upon whom the family heaps their attention. Meanwhile her husband delights in the occasion, oblivious to her concerns. The small talk and frivolity covering all that is wrong under the surface is more than Antara can bear.

Antara is a flawed heroine, admitting even in the opening line, “I would be lying if I said my mother’s misery has never given me pleasure.” But she is a heroine many women will identify with. She bears her mother’s imprint and indeed the mark of many generations of women. Under such pressure, who wouldn’t dance on the precipice of madness?