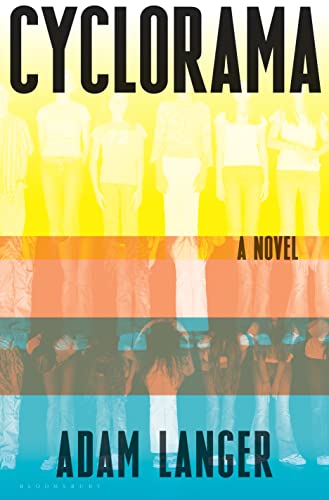 Cyclorama is a stunning novel that weaves together past and present while reflecting on and questioning Anne Frank’s timeless assertion, “In spite of everything, I still believe that people are really good at heart.”

The novel’s opening pages are formatted in the style of a play bill, listing the cast of characters, ten in all, in the production of The Diary of Anne Frank. At first, the author’s choice of play as structural device seems curious. The action begins with Declan Spengler, a senior and accomplished actor at North Shore, a magnet high school, sharing that very concern, “[He tried] to conceal his irritation with the play Mr. Densmore had chosen. The Diary of Anne Frank would be Declan’s last show at North Shore, and it was a grim play. The story of doomed people whose refuge turned out to be their prison.”

However, the novel wastes no time in explaining itself. “For Declan Spengler, everything that wound up happening—to himself, to all of them, to the whole crazy country if you stopped to think about it—started the day he auditioned for the role of Peter Van Daan.” Indeed, Declan and his classmates would be cast in roles whose imprint they would carry into adulthood.

The ten “doomed people” to which Spengler refers turn out to be not only the characters in the play, but to the characters in Langer’s novel. Written from each character’s point of view, the chapters bring to fore the mindset of the theatre kids who made “The Annex” their home as well as theatre director, Ty Densmore, a creepy, controlling man who had a way of fitting the actors who came through his program snugly under his thumb.

The novel is divided in two parts: the weeks in the early 1980s as the cast rehearses and performs the play, and 30 years later in November 2016, the teens now middle aged and living in an era when the inappropriateness of Densmore’s behavior and their high school experiences is re-contextualized against a back-drop of Trump’s election. It is one of those books that sets the reader up early for the before and after, the schadenfreude that comes with a yearbook’s prediction of “most likely to succeed” being extremely off.

Act II begins in November 2016 with a chapter in the perspective of Miep Gies. Eileen Muldoon, a rare fan of Tyrus Densmore who takes it upon herself to organize a celebration of the man’s 50-plus years at North Shore. Her opening paragraph reveals a hardened heart as well as a spirit of resentment taking hold across the United States of America. “[Eileen] was voting for Trump. That’s how it all started, really; that’s how everything came rocketing back: she was voting for Trump. She wasn’t exactly sure why, she wasn’t political, she couldn’t even remember when she last voted, but just saying it to herself felt good, like she was finally going to take control of her life: “I’m voting for Trump.” It was one of those things you said in private, something that made you realize you had more power than people thought you did-like giving someone the finger when they couldn’t see you doing it; like cursing at another driver in traffic when your windows were up. It was like singing swear words during the ‘Hallelujah Chorus’; like pissing in a clogged hotel shower and knowing you wouldn’t be the illegal immigrant who’d have to clean it up. “Fuck you; I’m voting for Trump.”

Franklin Lichtenstein, once groomed by Densmore and now a reporter living nearby, writes a feature inspired by Eileen’s planned celebration; however, instead of lauding the teacher, he raises his alleged transgressions if only for clickbait in an effort to save his job. Once the article drops and is circulated among old friends, it is Calvin Dawes, that grad who was the most unlikely to succeed but against all odds became the biggest star, uses his platform to Tweet about the article and his experience at North Shore. He did it not for himself, but for fellow North Shore alum, Todd Merritt, as he was dying of cancer. Todd and Calvin were both survivors of Densmore’s advances and invitees on the teachers special “New York Trip.”

As Calvin reflects on that era in his life including Todd’s timely appearance and rescue on a booze-filled night in Manhattan, his cynicism is the stark antithesis of Anne Frank’s idealism, “Densmore had done Calvin the favor of making him believe the worst about anybody, even his childhood heroes.” Regardless, Calvin selflessly responds to Todd’s pleas to take action. He writes several posts on his Twitter feed, at the time naïve to the effect they would have: “Little things like this are what actually matter.” Todd agrees, “Because they have bigger implications. I don’t like intermediate endings, you know that-not in theatre, not in real life. I believe in people getting what they deserve. . . . Here’s the thing, I’m gonna be dead soon . . . And I want Tyrus remembered for who he really was. It’s like those Nazi war criminals getting tracked down sixty, seventy years later. You think it’s too late? Bullshit. You’re a Criminal in Act I, you get punished in Act II.”

Despite Eileen’s planned celebration, Densmore retires from North Shore in haste amid the media blitz. One of the ten, an adult Judith Nagorsky, is recruited to direct the 2016 North Shore revival of Anne Frank. She gets creative, using US immigration policy as a backdrop, the play staged as a referendum against hate and a challenge for the Van Daams of today to rise up in protection of others. A daughter of her classmate, Carrie Hollinger (who played Anne herself), is also cast in the starring role. Since graduation, Carrie has dedicated her life to the health care of marginalized people, regardless of their citizenship.

When, on opening night, Eileen, in a fit of resentment, makes a call to Homeland Security claiming Carrie’s clinic is full of illegals, a crisis ensues and the adults who had once been cast as Anne and Peter Van Damn are called to action. They end up shuttling a young woman to Canada and into the care of another former classmate, Fiona. Carrie and Franklin speculate their portrayal of Anne and Peter’s budding romance, “I always think of what would have happened if they got out. I think of them finding an apartment together, finishing school, coming to America, starting a family, becoming grandparents.”

“I don’t know,” Franklin replies. “The point is, none of it happened. There’s no happily ever after when you look close enough at any story. There’s happy for a moment, but only if you freeze it in time. It all keeps moving. Anne and Peter, their tragedy wasn’t that they didn’t get to be together; it’s that they didn’t get the chance to choose to be apart. They didn’t get to fall out of love, to follow their dreams and see them shattered; didn’t get the chance to marry the wrong people, realize they’d made a mistake, then try to fix it while they were still young enough to do something about it, to get back together even when they thought it might be too late.”

Langer has a wonderful talent for not only recontextualizing The Diary of Anne Frank in two different eras in American history, but for allowing the inverse of optimism and idealism to rise to the surface. Whereas Anne was predisposed to seeing the positive and the good in people, Langer’s characters believe they have seen the worst and respond accordingly. They may be “really good at heart,” but so much has occurred to mask the goodness. Either selfishly or selflessly, the ten are examples of people doing their best to fend off all the negative—as if that’s the best they can hope for.