How the One-Armed Sister Sweeps Her House: A Novel 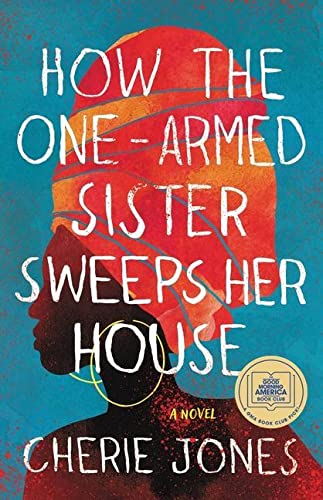 How the One-Armed Sister Sweeps her House is the type of novel you finish and then return to Chapter One to begin again. Because it is that good, but also because it is filled with nuance, subtlety, and rich relationships between characters, the depths of which unfold gradually.

The wonderful title refers to a cautionary parable told to Lala, the primary character, by her grandmother in the opening pages. She warns there were two sisters, one obedient and one naughty who couldn’t quell her curiosity to explore the infamous tunnels of Baxter Bay, Barbados. The grandmother recounts, “This sister question her mother, wonder what in the tunnels that so sweet she warning her away from it, because this good-for-nothing girl already developing a taste for things that her mother tell her not to have, this slack-from-she-born, force-rip sister already thinking that some bad things real sweet it can’t be evil. This sister thinking to herself, It not that dark, it not that spooky, what is the use of a tunnel if you don’t get to see where it lead?”

By opening her novel with this warning, Cherie Jones casts a foreboding veil over the rest of the book. Her use of language is consistent with that sentiment, rhythmic and poetic, carrying a tone of impending tragedy. Set in Barbados in the mid 1980s, the plot is heartbreaking although fairly straightforward. A poor young woman goes into premature labor, alone and afraid; a wealthy white family is robbed and the father murdered; a baby girl is born and also dies. There are investigations, grief, and cover ups, but this novel’s real accomplishment is the weaving of characters’ backstories, evoking a sense of inevitability and compassion even for the so-called villains.

Alongside the narrative of Lala and her husband Adan, Jones details the lives of Peter Whalen, the wealthy tourist who was murdered, and his widow Mira. The Whalens had traveled to Baxter’s Beach for many years and were, on this particular trip, attempting to rescue their marriage. Peter is killed while protecting Mira from the robber, leaving her with not only extreme guilt, but the job of consoling Peter’s children, dealing with the investigation, collecting the body, and fielding condolence calls from friends and relatives including her mother in London.

It is in Mira’s characterization of her mother that a key message of the novel is conveyed: “Extremes of anything are bad, and the two extremes of possession—deprivation and deluge—are especially crippling to the soul. For that reason, Mira Whalen’s mother has always advocated having just enough. Enough to keep you happy. Enough to eat. Enough to drink. No more or no less.” In this novel with prominent themes of class difference, extreme poverty, and lives of crime, Jones makes a profound statement, writing, “There is perhaps enough diversion in seeking to ascertain what enough is to last a lifetime.”

Along with Lala and Mira, each major character (and some minor characters as well) has chapters written in their point of view. Some of the most sublime are ones Jones writes in a haunting, second-person point of view, giving them an aura of Lala’s internal strength-summoning, and possibly phantom guidance offered by her deceased mother, Esme:

“If you is woman enough to call your own taxi from the hospital and tell it where to go, you tell yourself now, if you can mince out of that taxi with your stitched up parts still stinging and you can pay the taximan and you can cross the sandy soil with two bags and five pounds of baby in a pink dress you buy her with money you make from the same braiding, if you can get up the same twenty-five steps you mince down that night you went to find him, with two bags and a new baby, ain’t you woman enough to decide when you will take that baby and go back to doing heads?”

Later in the novel when the question of how one learns to love a man is posed, Lala eventually recognizes “that if you must learn to love a man, he is probably not the man you should be loving.” Although the novel portrays generations of abuse, eventually landing at the feet of Lala and Adan and informing the way they relate to each other, it also paints a picture of a good, loyal man who will become Lala’s protector. Lala knows love with this man named Tone, who had been her first love as a girl, quite ironically, in those forbidden tunnels. The knowledge that such love does exist is Lala’s salvation. Jones writes, “This knowledge, you tell yourself, and not the hands and the tongue and thighs of Tone beneath you, on the ground in these tunnels, is why you are singing. This truth that only the girls who dare to enter the tunnels are able to find out.”