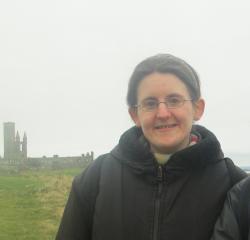 Anne Parfitt-Rogers is a freelance writer who
studied medicine at the University of Edinburgh. After successfully completing
a contract as a locum junior doctor in Scotland, and writing book reviews for
the BritishMedical Journal and Medical and Defence
Union of Scotland FYi magazine, she was inspired to delve further into the
written word and began working for a health social networking website.

She is the current editor of the Medical and
Defence Union of Scotland FYi magazine for junior doctors, a reviewer for
the Annals of Internal Medicine, and writes for a classical music
website and a food price comparison website.

Recently, Ms. Parfitt-Rogers has edited the ebook A
Framework for Health Innovation in Primary Care. She also enjoys creative writing, taking second
place in the March 2013 SoWriteUs competition and was shortlisted for her poem
“New Every Morning” on
The Poetry Hut.

She is an active social networking fan, using the
sites to keep up with friends and family as well as scientific and medical
advances. In her spare time, she is a first aider with the British Red Cross,
attends City Church Dundee, and plays guitar, oboe, and piano.

Hearing Voices, Living Fully: Living with the Voices in My Head

“even the most horrifying and bizarre beliefs are not sign and symptom of an irreparably broken mind.”

“To anyone who’s ever felt unlovable; forget that, you’re lovable.” This is the opening to Cory Martin’s book Love Sick, detailing the story of her romances while coping with a new diagnos

God Is Watching You: How the Fear of God Makes Us Human

“Whether you are a believer, an agnostic, or an atheist, this book is about you.”

How the Art of Medicine Makes Science More Effective

"a fascinating book that draws many parallels with Western medicine . . ."

“Be proud of who you are and recognize that your unique combination of genetics, brain chemistry and personality could land you in the pages of history.”

“Gritty and very realistic in places, this is a joyful, rewarding read.”

“a well-rounded book . . . It will broaden your knowledge and may lead to you to consider allergy in new ways.”

The Deeper Genome: Why There Is More to the Human Genome than Meets the Eye

“a compelling book that will enrich your knowledge of genetics and its potential.”

“an eye-opening book enriched by facts, figures, and heartbreaking stories, the addiction parallel of Professor Mukherjee’s The Emperor of All Maladies.”

The Electrifying Story of Multiple Sclerosis

This short book provides an upbeat but realistic portrayal of multiple sclerosis (MS), with enlightening illustrations and enough detail for those reading it to be educated without being overwhelme

Blockbuster Drugs: The Rise and Decline of the Pharmaceutical Industry

"If you are interested in the past, present, and future of the medicines you take . . . look no further than this book."

Pandemics: What Everyone Needs to Know®

Life’s Vital Link: The Astonishing Role of the Placenta

According to Samuel Taylor Coleridge, "The history of man for the nine months preceding his birth would, probably, be far more interesting and contain events of greater moment than all the three-sc

“. . . a useful tool for anyone who wants to improve his or her outlook on life and resilience against its storms . . .”

The Stressed Sex: Uncovering the Truth About Men, Women, and Mental Health