God Is Watching You: How the Fear of God Makes Us Human 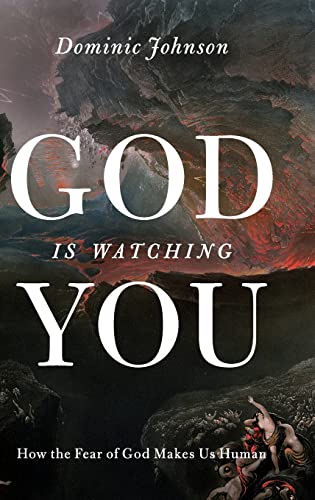 “Whether you are a believer, an agnostic, or an atheist, this book is about you.”

Where does God fit into our life and behavior? According to Dr. Dominic Johnson from the Department of Politics and International Relations at the University of Oxford, humans are hardwired to look for a higher power and a divine system of reward and punishment.

Drawing on anecdotes of survivors of the Indian tsunami in 2004, Dr. Johnson argues that human beings are bound to ask the question, “Why me?” when faced with scenarios outside their control. They are also likely to believe in some kind of “payback” system as a consequence of something good, or bad, that they have done.

Dr. Johnson compares the effects of moral behavior found in most major religions to the imagined results of superstitions held by many people. He reasons that both point to a belief in heavenly consequences, “If I don’t do what I think supernatural forces require . . . I will face payback.”

Common sayings such as, “eyes burning in the back of our heads, the walls listening, a sense that something or someone is out there,” indicate, according to Dr. Johnson, a view that we will be noticed—particularly if we are doing something wrong.

Johnson argues that this feeling spans cultures and nations, from the monotheistic religions to indigenous gods and even to atheists. We have evolved in this non-selfish way for our own protection, he states. But with religious attendance in decline, he wonders whether we still “need God”?

Johnson’s answer is a resounding yes. His “supernatural punishment theory” describes the way in which belief in supernatural sequelae, particularly negative ones, leads to evolutionary advantage.

The book explores the views of “New Atheists” such as Richard Dawkins, Daniel Dennett, and Christopher Hitchens—that the world would be better, and more peaceful, without God. However, even 34% of atheists believe they will be called before God at the end of their lives. And Dawkins himself agrees that, “Religion must confer some advantage . . . otherwise it would not have survived.”

Religious beliefs permeate the subconscious in mysterious ways. Johnson believes even atheists fear the disapproval of others and hold superstitions which improve their behavior. The majority of people also like to believe in a “just world,” with those who transgress receiving come-uppance for their actions.

With stories from Johnson’s home town, Cambridge, and his former home, Switzerland, to the moral dilemma in Puccini’s opera, Tosca, this book is easily readable while exploring some difficult and unusual concepts.

For instance, humans don’t always work together, particularly in larger groups. When people are tempted not to cooperate, often through lack of trust, punishment can be a key factor in reaching a decision.

In one experiment conducted by economists Fehr and Gachter, introducing punishment increased the amount of money people put into a collective pool. What’s more, more people choose to be in a group with punishment than one without, because this group holds more wealth—a fascinating scenario.

The book does not cover theological minefields such as why particular people or countries are chosen for punishment. Instead, it looks at whether strong beliefs are held about supernatural punishment which improve behavior. In one study of societies who shared a common pool of resources, the vast majority believed in divine powers, often as the only means of sanction.

Johnson does delve into the question of why these results should be so. Asking, “What makes God so great?” he describes the omnipotence and omniscience of God, leading to automatic and potentially more severe punishment than that created by human power alone.

In summary, this book argues that a religiously-based belief in punishments promotes co-operation and suppresses selfish behavior. It also recognizes the benefits of supernatural relationships and miracles, such as a survivor of the Haiti earthquake who was pulled from the rubble a month after the event.

With a tour of some of the world’s major and minor religions and civilizations, from the four remaining Shakers to the story of the divine retribution of the sword of Damocles, this is an intriguing book which is relevant to those of all faiths and of none. As Johnson puts it, “Whether you are a believer, an agnostic, or an atheist, this book is about you.”