Pandemics: What Everyone Needs to Know® 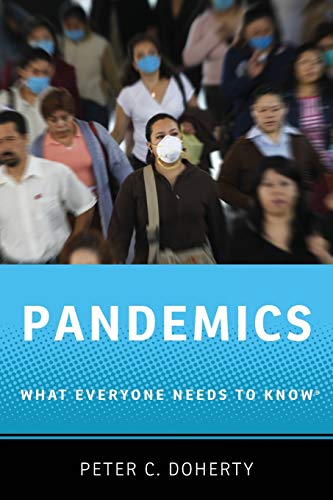 Recent health scares including the SARS outbreak, avian flu virus, and anthrax threats following 9/11, as well as movies such as Spielberg’s accurate but disquieting Contagion have raised the profile of diseases spreading across the globe, leading to destruction and life changes that cross class and social boundaries.

Pandemics, part of the What You Need to Know series for “busy people,” has been written by one of the experts in the field, Professor Peter Doherty. Now in his 70s, he still works in Australia and St. Jude Children’s Research Hospital in Memphis, Tennessee. He was also awarded the 1996 Nobel Prize in Medicine and is a prolific author.

A brief glance over the contents section will reveal a wide range of topics covered. From the possibility of bioterrorism to what to do if you notice a purplish rash, the book touches on common and not-so-common conditions with clear explanations and descriptions of their history, symptoms, treatment and prevention.

If you have an appetite for scientific detail, you will enjoy the sections describing the structure of viruses and drugs used to combat them, though others may find it wordy and a little dry at times, “‘Antigen’ refers to the components (generally proteins) on the surface of the virus that are recognized by the body’s protective antibodies (Ig), while ‘drift’ refers to the process of mutational change in the viral RNA that leads in turn to alterations in protein structure and ‘escape’ from Ig binding.”

However, the format of the book—short questions and answers—makes it easily readable and almost feels as if the author is talking to you. It also delves into less obvious areas such as economics and etymology – did you know that vaccine comes from the Latin for cow, named by Jenner's explorations into cowpox?

Surprisingly perhaps, there are few figures and references, although the photos and diagrams of viral particles and hospitals are helpful additions, as well as the classification of pandemic alerts into phases depending on the level of danger.

Older companions such as tuberculosis and influenza, with treatments ranging from sanatoriums to the actions of modern-day Tamiflu, are introduced alongside the newer variants including the Chikungunyah and West Nile viruses.

Professor Doherty adds his own views on the likely dangers of each of these, for example tuberculosis, “My personal view is that we should be optimistic and that, although TB should be closely monitored, the main danger when it comes to known respiratory infections continues to be the influenza A viruses.”

The author clearly has a sense of humor, for example in giving advice, “It may not be a good idea to nuzzle up to a parrot, but if you do subsequently develop a fever and respiratory symptoms, tell your doctor. The probable diagnosis will be the bacterial infection psittacosis, a disease that is readily treated with antibiotics.”

There are some intriguing chapter headings and titles, including, “Fledermaus, fruit bats and SARS,” which lives up to its promise and encompasses rabies, lyssaviruses, hemorrhagic fevers such as Ebola, the deadly encephalitis-causing organisms henipaviruses. A later chapter on the carriers, or vectors, of viruses, also includes the “break-bone” dengue virus and the jaundice-causing flaviviruses.

Professor Doherty’s passion on the subject is tangible and inspiring, and he is not afraid to stray from political correctness and anadine descriptions, for instance when depicting the transmissibile spongiform encephalopathies, “What they could see in brains that had first been preserved in formalin and then embedded in hot paraffin wax. . . was a brain shot through with holes.”

Although it refers to films, newspapers and popular culture, it is not sensationalist or alarmist and also mentions the 'good' organisms which reside in our bodies and the need for children to “get down in the dirt.” There are some imaginative ways to protect yourself—as well as the more obvious vaccination information, protective clothing and safe sex advice, knowing the emergency band on your radio, storing up food supplies and a First Aid kit of medical essentials are helpful tips.

The book takes a reasoned view of the risks, reassuring us that any pandemic is unlikely to wipe out the population and that most coughs and rashes will not be a deadly new strain of hemorrhagic fever or a fast-spreading viral pneumonia. It also gives down-to-earth advice, including what not to do during a pandemic (panic and congregate in public areas) and the likelihood of serious bioterrorism in the future.

As Professor Doherty points out, “Hopefully, such scenarios belong to novelists and Hollywood scriptwriters rather than to the real world,” but the book is a joy to read and educational at the same time.