Hearing Voices, Living Fully: Living with the Voices in My Head 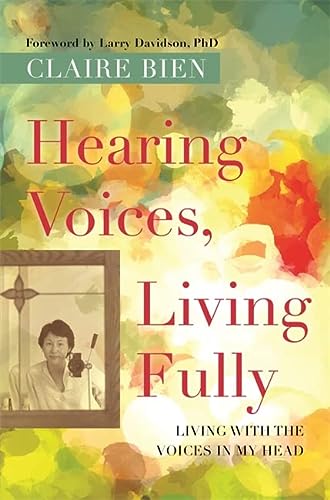 “even the most horrifying and bizarre beliefs are not sign and symptom of an irreparably broken mind.”

“When I began writing my memoir . . . I believed, based on my own experience and observation, that some people who have resigned themselves to a lifetime of medication management need not do so.”

This is a revolutionary book, written by Claire Bien, who has experienced and dealt with auditory hallucinations—latterly without medication. Now living with a son and successful career, it tells of her determination not to let the disease beat her.

Despite her initial concerns, sharing this story turned out to be a resounding success. With repercussions far beyond her dreams, her book has been recognized by some of the top medical colleges, including several professors from the Yale School of Medicine’s Department of Psychiatry.

Claire builds up a picture of herself, both before and after the onset of her condition. From her early childhood as the youngest of three Chinese immigrants, to her freshman years majoring in German, we see how the illness begins to affect her and those closest to her.

We learn about her alcohol and marijuana fueled twenties, where she felt depressed and people remarked she looked as if she was “waiting for something.” As well as setting the scene, it also explores the risk factors relevant to her life story.

She experienced a brief visual hallucination at 26, which inspires a fantastic poem, one of many in the book. “Those ghostly pretenders . . . You are more afraid there is nothing / Where something might be / Than of the madness that lies / In believing in lies.”

At the age of 31, she describes the onset of the voices—initially friendly and curious, then more threatening. She describes in detail the voices that she hears, what they say, and the effect it has on her. Although the voices can be negative and suggestive, sometimes they can also be upbeat and helpful.

Interspersed with diary entries letters from her husband, the tale of trying to hide her symptoms and her departure from her teaching job develops. Finally, her family decide to call the psychiatrist and she is admitted to hospital.

After a brief spell at home, where the voices start to intrude on conversations with her nearest and dearest, she is re-admitted, by this time with welts covering her body, “allergic reactions to something toxic within my system.”

Treated with Haldol, she finds the voices disappear, but the medication affects her thinking. This causes her to lose at the board games she had won a few days before, “I had lost vast and essential parts of myself: creativity, focus, fluidity, silliness, ambition.”

It is intriguing to discover her methods for dealing with the voices, from resurrecting happy childhood memories and relationships to standing firm against the bullying voices. She also points out that not all voices are unkind, but rather encouraging.

Interestingly, many of the techniques Claire had developed herself to deal with the abnormal phenomena she was experiencing, she later found to be existing strategies already used by many others with similar experiences.

After a period of remission, the voices return, taking on different forms and subjects, from telling her she is an alcoholic to saying she is “special.” In the recession of the early 90s, she is laid off from work at the council as her psychosis has affected her productivity.

Having a mental health disorder can raise the question: Where does psychosis end and faith begin? Claire explores her experiences in the Unitarian church and her “inner voice,” which she sees as a guardian angel. Following this, she describes the next stage, when the benevolent presence of her “God” leaves her in order for her to spend more time with others.

At home looking after her young son, Paul, she “flirts” with the voices, and when one suggests, “If you start to get scared, stop listening,” on the way to a job interview, she decides to follow that advice—and gets the job.

Although this book is primarily about Claire’s story, it also contains input from eminent professors and other sufferers, providing an excellent background to her own ideas and experiences.

Some of the book can be graphic, as Claire provides a full picture of the “degree of horror” such a condition can engender; however, she also provides hope of recovery, “even the most horrifying and bizarre beliefs are not sign and symptom of an irreparably broken mind.”