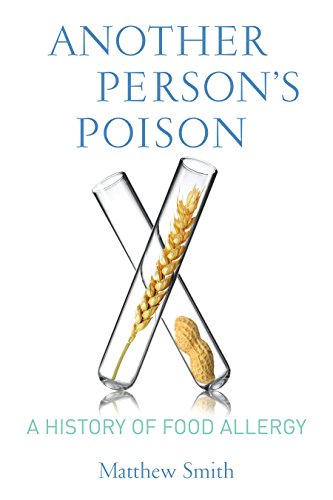 “a well-rounded book . . . It will broaden your knowledge and may lead to you to consider allergy in new ways.”

In this book, Dr. Matthew Smith, a senior lecturer at Strathclyde University, Scotland, with interests in allergy and attention deficit hyperactivity disorder, explores the rising incidence of allergies and the measures taken to combat them, including desensitization therapy, epinephrine, inhalers, and environmental solutions.

The text begins with an AC/DC concert, where peanuts were banned to accommodate those with serious allergy to the ill-fated foodstuff. It describes the reactions of fans to the ban, from supportive sufferers to those less tolerant, “Sorry you’re allergic but enough already. The world isn’t turning only for you.”

Smith draws an interesting parallel between these reactions and the explosive nature of the condition, and discusses ethical dilemmas about how far society should go to look after those with anaphylaxis, for example in closed systems such as aircraft.

Are bans an infringement of civil liberties or does the gravity of the situation justify these drastic measures, as one mother would claim? “. . . 4 year old has a nut allergy and it is VERY LIFE-THREATENING . . . If you could feel the fear with your own child you all might be more understanding.”

Smith has recently been awarded the title of New Generation Thinker for the BBC and AHRC, with his relevant research and ability to communicate this to the public. This is evident in his compelling introduction in addition to his use of anecdotes to dissect this complicated disease.

In the book, Smith reviews the history of the disease, from the days when it was considered little more than, “witchcraft, a fad or a racket” to current-day measures such as whole-school bans and stringent allergy testing.

With Smith’s interest in psychiatry, he is able to compare the anti-psychiatry movements of the 1960s with the psychosomatic explanations of allergy from a similar time period, with treatment varying depending on the specialist who was consulted.

Since the paediatrician Clemons von Pirquet’s initial coinage of allergy in 1906, reaching a definition for the disease through the ages has also proved problematic. The condition is described as extremely complex and can comprise a whole spectrum of responses, from mild intolerance to certain foods to full-blown anaphylactic reactions.

Smith explores the differences between the broad definitions of food allergists, beginning with the physician Francis Hare, the much narrower criteria of the orthodox allergists and the theories of those in the environmental camp. He also notes the seminal discovery of immunoglobulin E (IgE) in 1966 as a new era in allergy research.

As well as the more well-known forms of allergy such as asthma and peanut allergy, the book considers those affected by conditions such as sick building syndrome and multiple chemical sensitivity, as well as “sick head-ach” (migraine) and asthma.

It travels back to the days of Hippocrates and Galen, investigating the humoral theory and how it related to allergic reactions, as well as the Roman poet Lucretius, who invented the term, “One man’s meat is another man’s poison.” The language is fairly technical at times, but well explained by Smith.

Smith asks whether food allergy points to a greater danger applicable to all members of the population - a surrogate marker of poisonous substances similar to, “canaries in a coal mine.”

He delves into the world of animal allergies, noting how the reactions of dogs on the second exposure to sea anemones resulted in physiologist Charles Richet’s invention of the term anaphylaxis, from the Greek ana (against) and phylaxis (protection). We also discover reported cow’s milk allergy in a young walrus.

As well as being a scientific book, Another Person’s Poison looks at the effects that having an allergy can have on someone’s health, “patients also had to deal with the stigma of being on a special diet, because ‘the vast American public disapproves of people who diet.’”

We also find literary touches, with quotes from, among others, the “Ballad of the Allergists,” “Now that you know just what to use you sneak upon your victim, and scratch or stick, or cut or prick, according to the dictum.”

This is a well-rounded book that takes us on a thorough journey through key figures in medical history, theories of chronic disease, the rise of peanut anaphylaxis and the changing management of this under-researched and highly sensitive condition. It will broaden your knowledge and may lead to you to consider allergy in new ways.