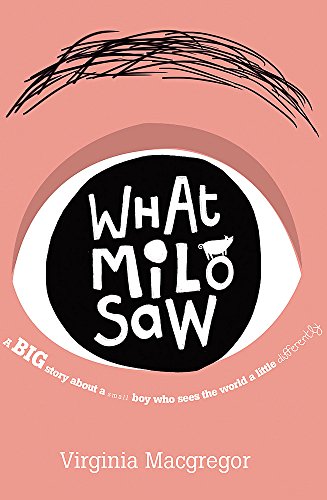 “Gritty and very realistic in places, this is a joyful, rewarding read.”

In this book we meet the wonderful heart-warming character of Milo, an extremely responsible nine year old who cares deeply for his Gran and does not want her to go into a nursing home.

Milo has a rare disease—retinitis pigmentosa—which is a progressive condition leading to tunnel vision and eventually blindness.

Because of this, the events in the book are described in intricate detail, from Milo’s list of signs that his Gran is okay to his mum’s special smell and the feel of the pencil marks in his paper.

Milo travels all around Europe, paralleling the life of author Virginia Macgregor, an English teacher and housemistress who grew up in Germany, France, and England with dreams of being a tennis player or a writer.

The story is told through the eyes of Milo and his grandmother Lou, and experience the views of those with visual difficulties, “. . . . he felt kind of lucky he didn’t have to see it all. People who saw everything at once must feel drowned by the world.”

As the book progresses, we also learn to look beyond the superficial and see things as they really are, a complex mélange of thoughts, emotions, and actions in an often confusing world.

It challenges our preconceptions of visual impairment, such as at school where Milo sits at the front, “because Mrs Harris thought it meant that Milo could see the board better,” although, “if you were further away from something, you could actually see more through the pinhole.”

During the tale we hear of harassed Mum Sandy, runaway Dad, energetic Dr Nolan, frustrated newbie chef Tripi, lonely Nurse Thornhill and Hamlet, the loveable pig. We bump into Milo’s classmates and teacher as he navigates his way through school.

Eminently readable, the book is descriptive, almost poetic in places, “He stared hard into the black sky and saw a single star winking at him . . . He hoped that maybe Gran was looking at it too.”

In places it goes into intricate detail, from Gran’s different-colored pills to the pictures beneath the chocolates from Milo’s advent calendar. It describes how Milo’s sight means he can have great attention to detail in certain things, while leaving out others.

Tinged with sadness, Milo discusses his mum’s emotions after his dad left, as well as his own on seeing his Gran being put into a home, “Milo had hoped that when you got old, people would stop making you do things.”

We look on as he strikes up a friendship with Tripi, the frustrated newbie chef from Syria, who longs to see his girlfriend Ayishah and to make his mark in a new country, “For Tripi, the world belonged to everyone; it was when people built walls and erected fences and locked doors that the problems began.”

Although Milo is upbeat about his problems, he realizes there are things he cannot do, “he thought of his classmates at school and all those boys who could do things like play football and ride skateboards and play tag because their eyes are right.”

But he has mysterious lodger Al on hand to encourage him, “‘Wow, that must be kind of amazing.’ Milo shrugged. ‘Not really.’ ‘I mean, it makes you focus, doesn’t it? I bet you see all kinds of things that other people miss.’”

As Milo engages in complicated subterfuge expeditions to rescue his Gran from the clutches of Nurse Thornhill at the Forget Me Not home, his Mum struggles to keep her beauty salon clients and deal with Milo’s deteriorating school results.

And after Petros, the Greek painter and fellow nursing home resident, falls in love with Gran Lou, he seeks to win over Milo’s heart and convince him it is never too late for a relationship.

In short, this is a spellbinding book that will give you food for thought and encourage you to step outside your comfort zone. Gritty and very realistic in places, this is a joyful, rewarding read.