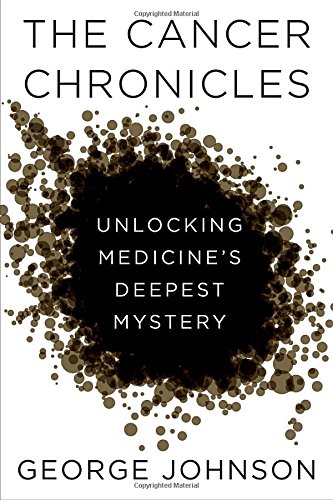 What do you do when your wife is diagnosed with a rare metastatic cancer? New York Times science writer George Johnson decided to find out as much as he could about the disease and its origins.

This book, which has been likened to Siddhartha Mukherjee’s The Emperor of all Maladies, although the focus and style are noticeably different, charts his family’s journey through illness and treatments along with some unexpected twists and turns.

In our lifetime, cancer is a condition likely to affect almost all of us. Mr. Johnson succinctly describes its paradox, “With so many checks and balances, a person must be extraordinarily lucky to get cancer. Then again, with so many things that can go wrong, it is amazing that cancer doesn’t happen all the time.”

Imaginative and evocative chapter headings such as “Beware the Echthroi” and “Adriamycin and Posole for Christmas Eve” leave the reader curious to delve deeper into the book and its varied meanings. There are links with historical sufferers, large-scale cancer conferences, oncological centers, and Mr. Johnson’s other literary works.

The discipline of paleontology features prominently in the opening chapters, including the exploration of prehistoric animal cancers, and why certain creatures are more likely to develop it than others. There’s even a record of the oldest known cancer—in a dinosaur.

The writer’s hopes and dreams are expressed vividly from the early days when “Anything seemed possible” through to the diagnosis of UPSC, an aggressive uterine cancer, and Nancy’s subsequent treatments.

Clinging onto evolutionary biologist Stephen Jay Gould’s pronouncement, “The median isn’t the message,” after his mesothelioma diagnosis, Mr. Johnson unpacks the statistics while searching for the best possible care for his wife.

Those who are awaiting cancer treatment will be interested to read the descriptions of Nancy’s diagnostic tests and treatment, from her early meetings with the oncologists and surgeon to choosing the right center.

Mr. Johnson’s interest in physics and his first-hand experience as a relative provides elucidative illustrations of the process, including PET scanning, “PET stands for positron electron tomography, a triumph of medical technology from the recondite world of particle physics. The patient fasts the night before so the body’s cells are starving. When radio-tagged glucose is injected it is easily consumed. Malignant, rapidly dividing cells are especially voracious.”

Throughout, Mr. Johnson’s clear writing style explains complex topics in a manner that is incredibly easy to understand, for instance his description of methyl groups that can turn DNA on or off, “In the iconic image, DNA’s interwoven coils float elegant as jellyfish in lonely isolation. But in the messiness of the cell, the two helical strands are wrapped around clusters of proteins called histones. Methyl groups . . . can bind to the helix . . . and cause the whole assembly to flex. As that happens some genes are obscured and others exposed.”

The book is remarkably detailed and informative. For instance, Mr. Johnson has used the Memorial Sloan-Kettering cancer prediction tool to determine the benefits of giving up smoking in terms of lung cancer, with surprising results. We also learn about doxorubicin, or Adriamycin, which takes its name from its ruby-red pigment and the color of the Adriatic Sea, and paclitaxel from the bark of the yew tree.

His level-headed and well-reasoned exploration of the role of factors such as diet, carcinogens, geography and lifestyle deals well with the area of statistics and epidemiology on a population level.

He also explores the risk factors relevant to his and his wife Nancy’s own situation and his feelings as to what could have caused her cancer. Was it because he did not want children? Did her upbringing on the cancer cluster of Long Island have an impact? His honesty draws emotions and makes the book realistic and compelling.

He also tries to maintain sense of humor in a story that is far from comical, describing the naming of sonic hedgehog and p-induced wimpy genes, while remarking that these idiosyncratic names derived from the laboratories sometimes appear out of place when faced with an all-consuming tumor. Perhaps a better description would be Mr. Johnson’s comparison of cancer with the weeds in his xeriscape roof garden.

As with the Emperor of all Maladies, inventors and discoverers such as Pierre and Marie Curie, Rudolf Virchow and Bruce Ames feature in the text; however, unsurprisingly perhaps, the heart of the book is the family story, giving it a very personal feel.

This is a masterpiece of clarity that manages to combine an encyclopedia of different aspects of cancer with a fascinating and emotive life narrative.