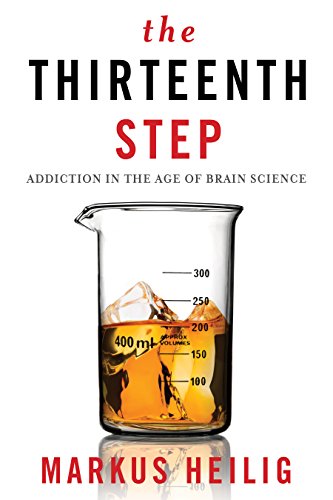 “an eye-opening book enriched by facts, figures, and heartbreaking stories, the addiction parallel of Professor Mukherjee’s The Emperor of All Maladies.”

This fascinating book, which reads almost like a novel in places, describes the science behind addiction, its effects on people’s lives, and the avenues for treatment. Its gripping patient anecdotes are very descriptive, “Yellow as a canary, she looked shrunken and could not have weighed over eighty pounds, yet her belly floated out into the bed like a balloon half filled with water.”

Alcohol, a drug of addiction often overlooked despite its vast effects on quality of life, perhaps because of its prevalence in today’s society, begins this comprehensive tale. We learn its history from the times of ancient Greece, then are transported to Russia with the manufacture of vodka.

Professor Heilig manages to maintain a nonjudgmental attitude toward those who become addicted, even becoming persuasive in attempts to change people’s responses to addiction. He challenges us to think beyond what we see and asks profound questions about society today, “Your brain is not wired much differently from that of your fellow human on the floor.”

The book describes how addiction traverses social class, from Eric the grocer who swears he hasn’t been drinking to an affluent mother of two presenting with acute liver failure and a former chief police officer who is found half-dead. In showing the human side, he draws us into his patient stories in a way few can resist.

As a quote from Professor Heilig’s book points out, “Much of the varied experience . . . can be interpreted as the patient’s astute observation of the alcohol dependence syndrome—a condition certainly far better described by the average alcoholic than any book.”

In contrast to the softer data, seminal papers and statistics are used to good effect, “Alcohol alone ranks as the third most common preventable cause of death in the United States and is estimated by the Centres for Disease Control and Prevention to kill an astounding eighty to ninety thousand people a year.”

Hidden or less well-known addictions are also included, such as Valium use in older people which can produce delirium, and the “less addictive” drug marijuana, which stays in the body long enough for withdrawal effects to go unnoticed. It’s a very honest book, but also positive; he is a firm believer that “relapse does not have to be a disaster.”

During the discussion, Heilig tackles some difficult questions: What causes someone to become addicted or dependent while others do not? Does this mean they are somehow different to others who are not ensnared by this trap? Should addiction be treated as a disease? What about those who never seek treatment?

Heilig expertly dissects these questions, from his definition of those seeking help as suffering from “clinical alcoholism” to his analogies of kidney and heart failure, with multiple paths leading to a single syndrome.

His work as a doctor and scientist in the laboratory allows him a broad range of access to the biology, psychology and social aspects of this condition, including animal models casting new light on the science of addiction behavior; however, he handles this with humility, praising the work of staff such as self-help groups and psychologists as playing “a much greater role than doctors.”

On a more personal note, we learn about the author’s upbringing in a Jewish family in Poland and later Sweden. The book is dedicated to Heilig’s father, a believer in good old-fashioned hard work, with references to his influence in Heilig’s life, “Sometime later, as I was crossing the campus for an all too rare lunch with my father . . .”

In summary, this is an eye-opening book enriched by facts, figures, and heartbreaking stories, the addiction parallel of Professor Mukherjee’s The Emperor of All Maladies. It is well-balanced, thorough, and challenging, inducing empathy in members of the public and those working in the field alike.