The Stressed Sex: Uncovering the Truth About Men, Women, and Mental Health 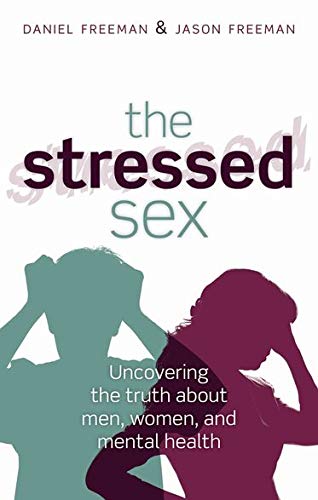 Are mental health problems more common in men than women? The same? Or the other way around? These are the questions posed by Daniel and Jason Freeman in their most recent collaborative book The Stressed Sex.

According to the World Health Organization, “Overall rates of psychiatric disorder are almost identical for men and women.” But data unearthed by Professor Freeman and Mr. Freeman has suggested otherwise. Five years in the making, this is the first book to investigate gender differences in the field of mental health.

The Stressed Sex uses a wide field of evidence from national and international surveys to interpret results and form conclusions. With conditions ranging from insomnia to antisocial personality disorder, the data are compared to determine trends in recent centuries. And the answer? Essentially, women are significantly more likely to be affected by psychiatric disorders than men.

It’s true that a small proportion of disorders are more common in males, for example, alcohol abuse and autism. Interestingly, diseases with a high genetic component, such as bipolar disorder, are equally distributed. Dr. Freeman and Mr. Freeman examine each disease in turn, with chapters ranging from “emotional disorders” and “less common problems” to “alcohol and drug problems.”

The Stressed Sex is easy to understand, with clear explanations of statistical topics and calculations and psychological definitions, as well as a jovial tone in places, “A notable spat took place between, in the blue corner, the sociologists . . . and, in the red corner, the epidemiologists.”

A significant proportion of the book is dedicated to the reasons behind these differences. The cultural background, from Platonic versus Aristotelian thinking to “Sugar and spice and everything nice, That’s what little girls are made of” is explored, as well as genetic factors, childhood upbringing of girls and boys, body image and the media, and the targeting of psychiatric medications toward women.

The book charts changing gender roles through the ages and the approaching of equal pay. Although noting the lack of effect on the overall rates of anxiety and depression among women, it postulates that one reason for the differences between sexes is the role of the “stay-at-home” housewife with little social contact and the stresses of bringing up children.

The authors also venture into the less-well-studied area of childhood mental illness, exploring questions such as why boys are more likely to be diagnosed with conduct and oppositional defiant disorder, as well as the changes occurring during puberty.

The book touches on complex topics such as childhood sexual abuse, reported to be 10 times more common in girls and linked with later depression, and the sociological view of psychiatric diagnosis as a method of exploitation and product of culture (a view not supported by the authors).

It also provides a thoughtful insight into psychopathy. “She was interviewing a psychopath. She showed him a picture of a frightened face and asked him to identify the emotion. He said he didn’t know what the emotion was but it was the face people pulled just before he killed them.”

Social factors are explored, including interpersonal dependence, which is higher among women. Although this leads to stronger relationships, it can also cause higher levels of rumination, a risk factor for emotional disorders and low mood.

The book also explores whether women are more likely to talk to their doctor about their problems and points out that this may be changing. It highlights examples such as Paul Gascoigne’s tearful sendoff at the 1990 World Cup semifinal, indicating men today could be more willing to display their feelings.

For keen scientists, biological aspects are covered, including the hippocampus and hypothalamic-pituitary-adrenal (HPA) axis, the model of raised cortisol levels in depression. It also investigates the contributions of polymorphisms such as the 5-HTT “neuroticism” gene and the “tend and befriend” influence of oxytocin in the predominantly female response to stress.

A few topics aren’t discussed, such as premenstrual tension and postnatal depression. The book does mention the problems of categorizing people according to international classifications, which may misdiagnose those who meet four but not five of the criteria or which can medicalize normal life events.

At the end of the book, few answers are provided; however, as the introduction points out, this is a new area and requires further research. Overall, this is a fascinating text that provides an in-depth analysis of the topic with clear illustrations, a suitable amount of historical information, and relevant case studies. To find out more, delve deeper into the book.